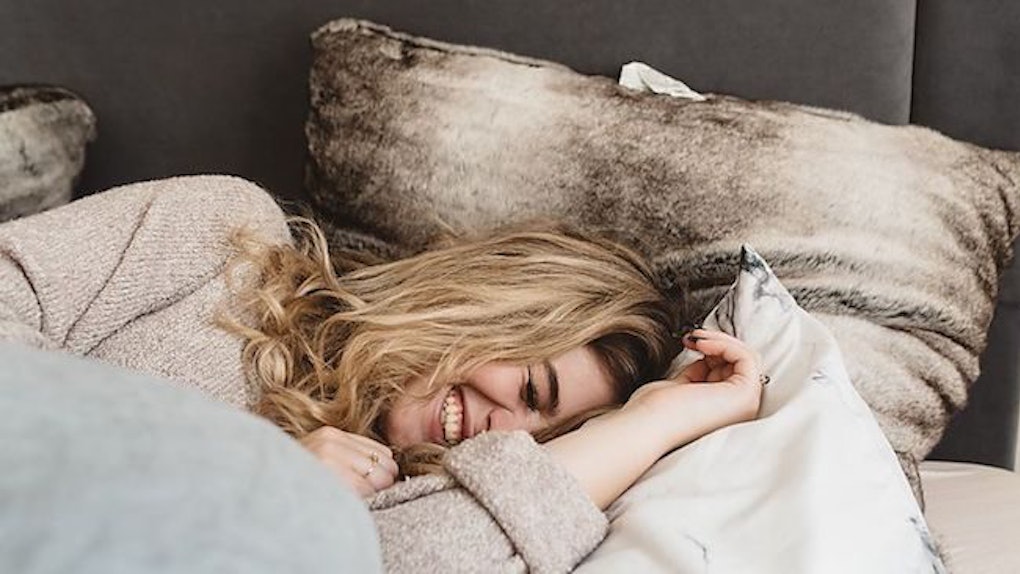 Is Sleep Important For Your Health? Science Says It's The Key To A Happy Life

Unless the first thing your feet touch in the morning is a pile of sharp nails or surprise pet droppings, waking up on the wrong side of the bed is physically impossible. Waking up from a rough night's sleep, however, can definitely start the day off on a sour note. And if your quality of sleep can alter an entire day, how is sleep important for your health over a lifetime?

Wu-Tang Clan once said "cash rules everything around me," but new research suggests it's less about the money (money, money), and more about how your sleeping patterns control your quality of life overall. A study conducted by the Oxford Economics and National Center for Social Research asked 8,250 UK residents to complete a survey that focused on the eight pillars of well-being. Out of the eight -- some of which include sex life, job security, and relationship status -- sleep quality was found to have the most influence over whether or not a person considered themselves to be “living well.”

While I can't speak for everyone, I personally feel like I'm living my best life when I can clock in anywhere between six and eight hours of uninterrupted snooze time for multiple nights in a row. It helps me feel more alert, energized, and motivated to give my all in my day-to-day tasks. But sleep can affect much more than how awake you feel throughout the day. In fact, it influences almost every aspect of your life.

For example, those who sleep less than six hours a night are prone to inflammation and disease.

A 2010 study performed by Emory University School of Medicine's cardiology fellow Alanna Morris, MD, assessed the sleep duration and quality of 525 middle-aged participants. Results showed that acute sleep deprivation “leads to an increased production of inflammatory hormones,” as well as changes in blood vessel functionality -- aka your blood flow, and how it affects your liver.

Inflammation can potentially lead to a whole slew of health issues, including diabetes, heart disease, and stroke. You might want to think about that the next time you're considering skipping a few hours of sleep in favor of finishing up that last season of Game of Thrones.

The FDA-recommended sweet spot for sleep is anywhere from six to eight hours a night, which science says will help reduce stress overall.

In the opening scene of Hairspray, Tracy Turnblad rises out of bed, singing and dancing until she reaches the front steps of her high school. I'm not suggesting that a full night's rest will have you serenading your neighbors with Broadway show tunes, but it'll definitely have you up and ready to conquer whatever the day has in store.

Sleep can definitely reduce levels of stress, and with that people can have better control of their blood pressure. It's also believed that sleep affects cholesterol levels, which plays a significant role in heart disease.

Circling back to that idea of waking up on the wrong side of the bed, according to the National Sleep Organization, the right amount of sleep regulates the "feel-good brain chemicals" dopamine and serotonin, causing you to wake up feeling recharged, refreshed, and even more confident. The better you feel, the less likely it is that stressful situations can put a damper on your mood.

However, there is such a thing as getting too much sleep.

I'll be the first to admit that I thoroughly enjoyed all those adolescent years of sleeping in, sometimes past noon, only to laze around the house in my pajamas all weekend long. And while, at the time, snoozing into the early afternoon felt fantastic, sleeping in too often isn't all that great for your health.

SKelsey Down, a sleep expert and writer for Sleep Train, tells Elite Daily,

If you're sleeping too much, it might be a sign that you're not getting enough rest due to a health issue like sleep apnea, or that you are depressed. Too much sleep might lead to anxiety, lethargy, or reduced cognitive functioning.

Too little or too much of anything is never beneficial to your health, and surprisingly, that goes for how much you're sleeping, too. The recommended six to eight hours is definitely the target to aim for, so take a look at your schedule and rearrange accordingly.

Look, it's not the end of the world if you're stuck tossing and turning one night and staying in bed past 10 a.m. the next, but getting the correct amount of sleep will ensure a higher quality of life and that, in my opinion, is worth missing an episode or two of GOT.