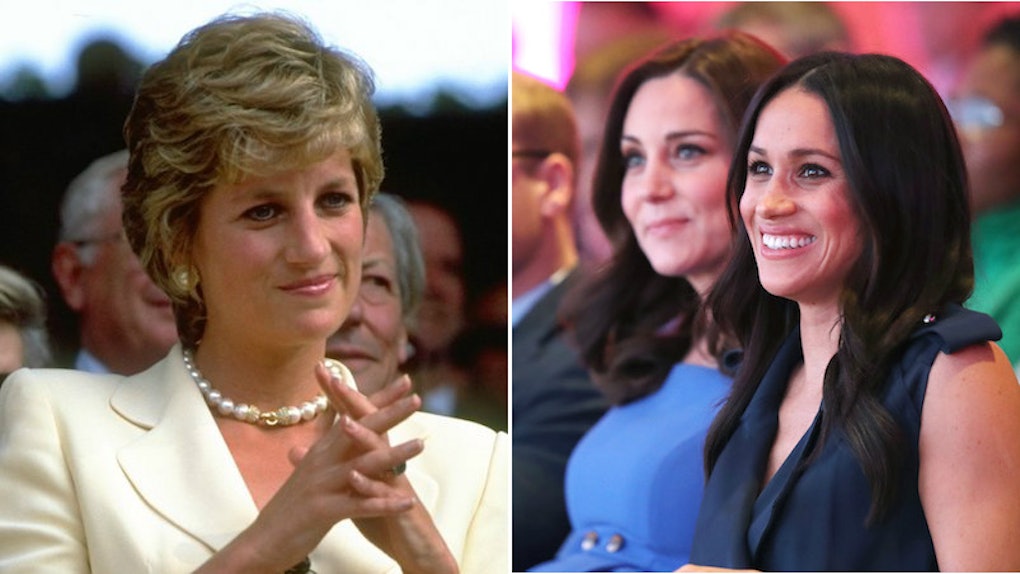 Buckle up, plebeians. We're on a deep dive today and the name of the ride is Princess Diana Is The Freaking Best. So strap in, get on board, or come back when you're ready for this fire. It's been a huge year for the British royal family, giving regular folks like me a reason to spend their lunch breaks googling things like royal tradition, the crown jewels, and all the mystery and magic behind Princess Diana and her legacy. Princess Diana's most iconic royal moments made her accessible in a way no royal before her ever was and I'm a new devotee. Especially since she paved the way for our favorite royals of the 21st century, Kate Middleton, Duchess of Cambridge, and Meghan Markle, Duchess of Sussex, to lead totally iconic royal lives of their own.

Here's what I've gathered... being royalty is a whole thing. There are traditions, rules, and guidelines for just about everything. While Princess Diana was definitely not a commoner prior to marrying Charles, Prince of Wales she was still pretty freaking hardcore. Despite having been raised in a British aristocratic family, she was down to earth, opinionated, and so much more "out there" than the other royals around her. This translated in a lot of different ways and was often met with criticism from the public. Still, she defiantly marched to the beat of her own drum all the up until her untimely death.

Here are just a few of my favorite traditions broken by the late, great, Princess Diana that helped pave the way for Kate Middleton, Duchess of Cambridge, and Meghan Markle, Duchess of Success.

1. She picked out her own engagement ring.

According to Good Housekeeping, Princess Di went way off the beaten path when she picked out her own engagement ring — from a catalog, no less. Apparently, it came from Garrard, which also happens to be "the longest-serving jeweler in the world." Kate and Meghan didn't pick out their own rings, but Diana's break from tradition still played a major role in at least one of her future daughter-in-law's lives, since the ring would later be given to Kate Middleton by Prince William. A few stones from Di's precious jewelry collection were added to Meghan Markle's ring, too.

Famously, Princess Diana specifically chose to not promise to obey her groom as part of her wedding vows. Up until Diana and Charles' wedding in 1981, royal couples recited traditional vows from the Church of England's Anglican Book of Common Prayer. In those instances, the woman always promised to "love, cherish, and obey," and the husband promised to simply "love and cherish." Princess Diana was basically like, "Yeah, that's a no for me," and cut the word out. Kate Middleton and Meghan Markle followed in their late mother-in-law's footsteps, also opting out of the whole "obey" thing.

3. She sent her kids to public school.

Good lord. Princes among commoners? GASP! Princess Diana went rogue when she pushed to have her boys attend public school. According to ABC news, Di fought to have her children go to public school with the intention of making their lives as "normal" as possible. Prince William's bodyguard, Ken Wharfe, said Princess Diana told him, "Now listen, William, there's going to be a lot of photographers at your new school, so you need to behave yourself.' And he, in this sort of just William way, said to his mother, just below the pink cap, 'I don't like 'tographers." Apparently, Princess Diana basically told him to suck it up, replying, "Well, you're going to get this for the rest of your life." Presumably, Diana's break in tradition helped shape the men Kate and Meghan know and love today!

4. She broke the queen's dress code.

Princess Diana is widely known for her chic fashion and daring dress choices. As a royal, the fashion protocol can seem totally extreme. However, Diana challenged the norm by wearing dresses that revealed her shoulders, cut close to her bust line, and even one time wore a choker necklace as a headband. While Kate and Meghan both do an impeccable job at looking extraordinary given their intense guidelines, both women have been known to push the envelope just a little bit, too. For example, Meghan Markle will step out sans-pantyhose and Kate Middleton loves to rock a good wedge heel when the Queen isn't around!

5. She spoke freely about subjects that matter to her, like mental health.

One year before Princess Diana and Prince Charles ended up getting divorced, she sat down for a revealing interview with BBC. In it, she discussed extremely personal and sensitive topics like her struggle with bulimia and depression over the years. While it was certainly shocking for a royal to speak so openly about matters that were unfairly deemed taboo at the time, it paved the way for a much bigger, necessary conversation we all still need today. It also made these stressful topics more accessible for her own children and their wives to discuss moving forward. Prince Harry has been open about his own mental health journey and has become a huge advocate for others seeking help.

6. She WAS the people's princess.

Princess Diana was the first royal to strip away all the pomp and circumstance and treat everyone as an equal. She famously shattered a massive stigma around the AIDS epidemic in 1987 when she shook the hands of HIV positive patients without wearing gloves. It was a revolutionary moment given the misinformation the public had about the disease at the time and the misplaced fear people had surrounding it. A nurse who was present for Princess Diana's hospital visit told the BBC, "If a royal was allowed to go in shake a patient's hands, somebody at the bus stop or the supermarket could do the same. They really educated people." Kate and Meghan are also both known for their generosity and ease around members of the public and continue to work to limit the barriers between the royal family and their people.

All in all, Princess Diana was a revolutionary. Her continued efforts to stay true to herself and take care of her loved ones is something we will continue to admire through Duchess Meghan and Duchess Kate. As for me, I'm going to start wearing a choker as a headband. Just watch.