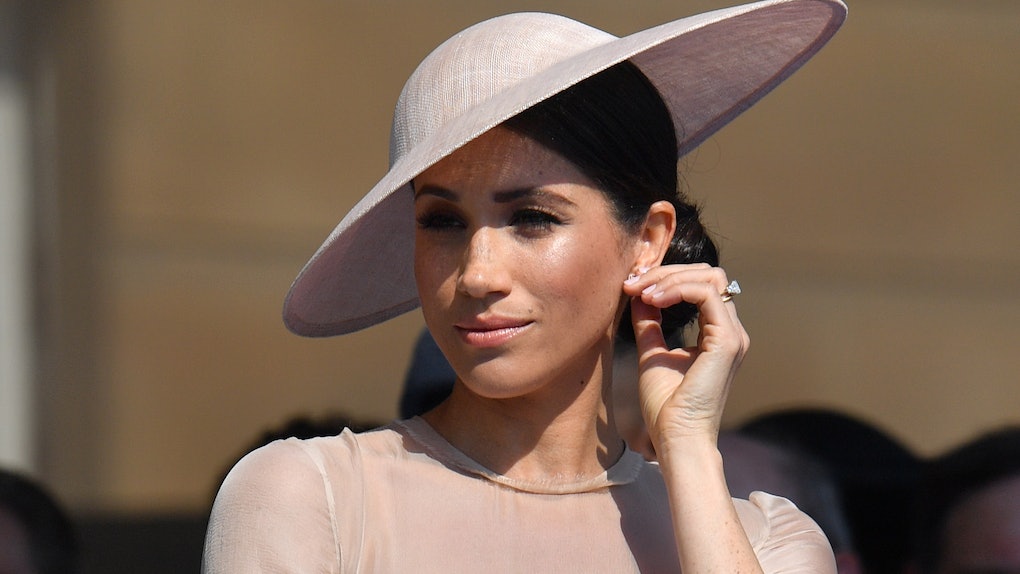 Meghan Markle's Royal Fashion Rules Are Begging To Be Broken

The biggest wedding of the year might be over but that doesn't mean that all eyes are off of a certain American-turned British royal's style. In fact, Meghan Marke's royal fashion rules that she'll be following from now on just might be more surprising than the reveal of her wedding dress designer was. Okay, maybe not...but they're still undeniably interesting!

Upon Markle and Prince Harry's marriage, each of their new titles were announced. Prince Harry received a title upgrade to Duke of Sussex, becoming the first person to hold that title since 1843. Cool, right? Markle, therefore, became the Duchess of Sussex. Also very cool. And with a new official royal position comes new official royal dressing rules that Markle will be expected to abide by. In order to determine which rules that have been swirling around within the media are genuinely upheld and which ones are simply products of the rumor mill, InStyle tapped etiquette experts at The English Manner to give them the authoritative lowdown on all things royal fashion. Read on to gain insight into how Markle's style will or will not be changing in the coming months. Hopefully it won't transform too drastically—her chic, streamlined aesthetic has become someone iconic.

Black is generally a no-go, although there have been a few exceptions...

"Generally it is thought that black is not usually worn unless in mourning, although Diana Princess of Wales did occasionally wear it for evening functions, and The Duchess of Cambridge has been known to do so," The English Manner Chief Executive Alexandra Messervy explained to InStyle. "I note that there was a bit of an outcry recently when Ms. Markle wore black for a daytime event, but in the modern age I don’t think that it is ‘frowned’ upon so much at all, and indeed funeral codes often state 'colors/no black.'"

Certain colors should be worn during international visits.

Royal family members will show respect to whatever country they are visiting abroad by wearing its emblems or colors.

"Usually they will try to pay a compliment to their host country or state by including a national bird, flower, or color, for instance, into an outfit," Messervy told InStyle. "Both HM The Queen and Diana Princess of Wales were brilliant at that (Japan official visit etc)."

When going to events involving large crowds, bright colors must be worn.

This is to help royals be spotted at a moment's notice as a means of providing increased security. The royal family wears "colors which are bright so that they can be easily picked out in a crowd," explained Messervy.

Nude tights aren't a requirement but panty hose in general typically are.

A rumor has been going around that the Queen herself decreed flesh-colored tights an absolute must. But is it true?

"No, it is not true! They are at liberty to choose whatever color tights they wish, and indeed often opaque colors work well with outfits. I think the only reason they have chosen ‘nude’ in recent years is because they have become so much more fashionable, and the ‘bare legs’ look became the craze," said Messervy.

When it comes to official engagements, pants aren't an option for female senior family members.

"You don’t see senior members of the Royal Family wearing trousers or trouser suits for official engagements," Messervy said. "A departure from that has been on occasion HRH The Duchess of Gloucester and HRH The Princess Royal, I think, but very rare."

This is one rule I wonder if Markle will break. While I understand and respect tradition, it seems a little antiquated, if not sexist, to me. Markle is certainly a strong and progressive woman so I'll be interested to see if she doesn't opt for a nice trouser every now and again for such events.

Sleeveless styles are generally not a part of the royal style rotation.

"They don’t usually wear sleeveless dresses and they usually wear clothes which are not too short in the hemline because of bending down and sitting in public," said Messervy. (Please see point above.)

More like this
This Fenty Beauty Eaze Drop Blurring Skin Tint Review From Kyla-Drew Is Fire
By Elite Daily Staff
When Does Zara Beauty Launch? The Fashion Retailer's Beauty Brand Is Coming Soon
By Margaret Blatz
The Best Gua Sha Techniques, Tips, & Tricks To Use, According To Experts
By Margaret Blatz
Stay up to date