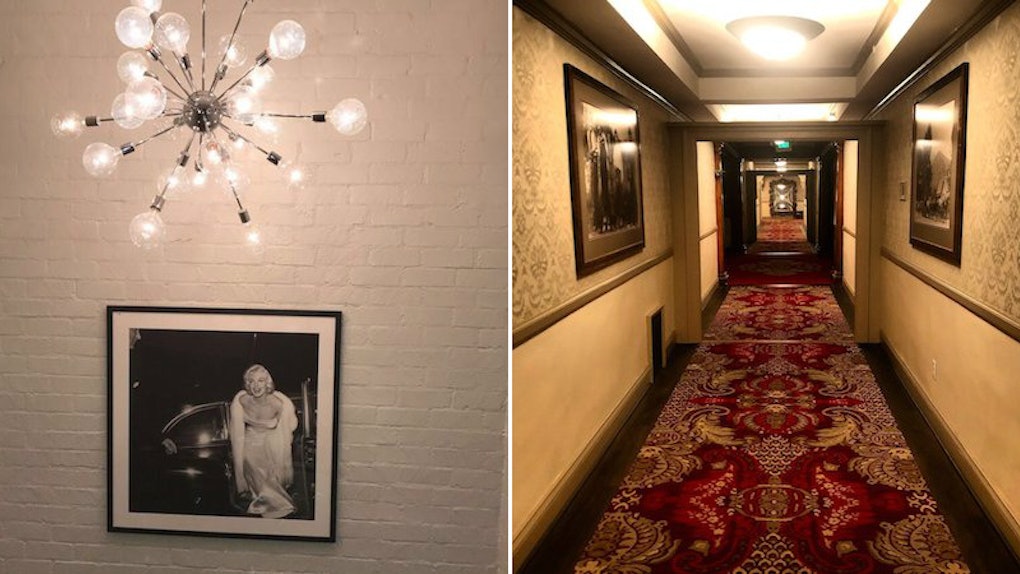 Despite the fact that I have practically no tolerance for being scared by spooky stuff, I have ventured to a few haunted houses in the past — though I'm not sure I could ever stay in a haunted location overnight. If you already consider yourself to be a pro when it comes to being scared out of your mind, perhaps you should test your limits even more by seeking out some haunted hotels to stay in on Halloween. These six spots will make sure your All Hallows' Eve is packed with all kinds of creepy paranormal sightings — that is, if you can stand to stay there all night.

For a little extra comfort, I'd suggest bringing along a friend or your partner so that at least you'll have someone to cling to if a shadowy figure appears in the bathroom mirror, or you're woken up by something that sounds like fingernails scratching the wall.

Whatever you do, make sure you have plenty of materials ready to document the spooky experience — after all, there's nothing like returning from a haunted location with dozens of photos of creepy, glowing orbs, or audio recordings of demonic, inexplicable sounds.

Who knows what you'll discover at these six haunted hotels? All I can say for sure is, if you really get scared, at least you'll have the comfort of freshly laundered sheets to hide beneath until the sun rises.

What better way to chase the All Hallows' Eve spookiness than spend the holiday in a 19th century plantation? The Myrtles Plantation's website claims it's "one of America's most haunted homes," and if you were to book a room at the bed and breakfast, you might just come across a ghost named Chloe. According to the hotel's website, "The Legend of Chloe" says that, back in 1992, a photograph taken for insurance purposes supposedly revealed a young slave girl standing between the plantation's two buildings.

Choose from one of the "spirited rooms" at the Stanley Hotel if you're feeling especially brave on Oct. 31. In case you don't already know, Stephen King was so inspired by the spooky happenings at the Stanley Hotel while staying there himself in the 1970s that it led him to write The Shining.

And according to a firsthand account of what it's like to stay in the Stanley Hotel, published in The Independent, you might just hear a child scream or giggle in the middle of the night, or perhaps you'll come across a green orb floating across your room's walls. Either way, prepare to be thoroughly terrified by a number of ghost sightings and scary experiences.

Not every hotel stay calls for writing supplies, but if you visit the Green Park Inn during Halloween, be prepared to take some notes. According to The Washington Post, this 19th century hotel keeps a detailed ghost log in the lobby for guests to record any paranormal experiences they have during their stay.

Room 318, as per the news outlet, is apparently a popular spot for the inn's two main ghosts: the hotel founder's daughter Laura Green, and her fiancé, who supposedly left her at the altar on the day of their wedding.

While the grounds of La Posada de Santa Fe are absolutely beautiful, if you're looking for a spooky stay during Halloween, you won't be disappointed. According to the resort's website, the original owner of the establishment, a woman named Julia Staab, loved the hotel so much that she simply never left. Her hauntings are so famous that they've been detailed in a book about her life called American Ghost. Get caught up on Staab's lingering presence before your stay, and hopefully you'll catch a glimpse of her while you're there.

This seafaring inn's nautical theme isn't the only thing that makes it the perfect place to show off your pirate costume on Oct. 31. Join a tour hosted by the the Admiral Fell Inn's resident historian, who will shiver your timbers with tales of the ghosts and legends that have been said to haunt the hotel.