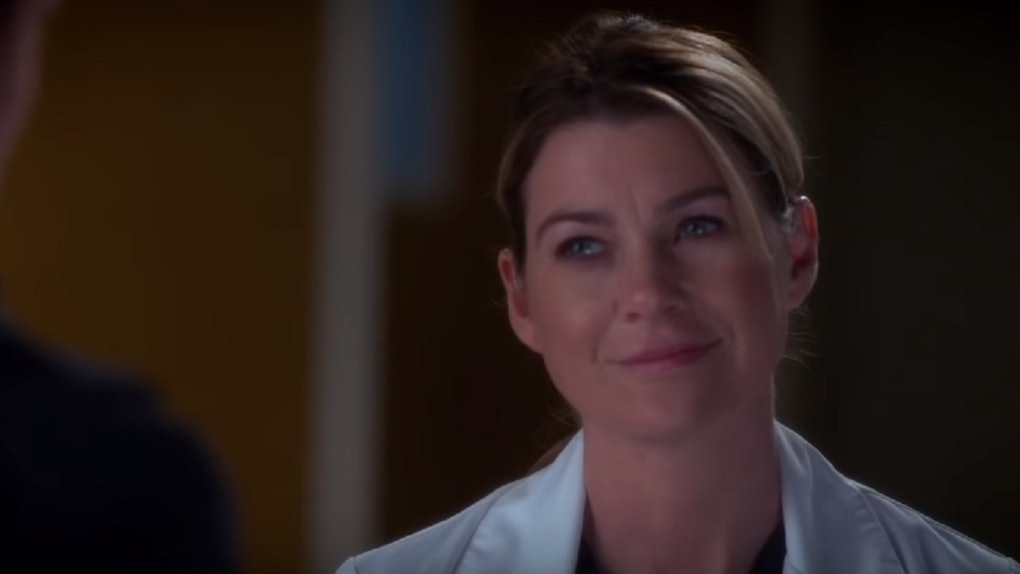 We have two weeks to go until Grey's Anatomy returns with a record-breaking Season 15. Although we can never fully master the art of predicting what comes next, the new season's trailer has given us plenty of fuel for theories about what hookups, operations, and untimely deaths may be in store this year. The hot new action was fleeting in ABC's teaser, but in case you don't have time to break down the clips, here are some clues from the Grey's Anatomy Season 15 trailer you may have missed.

There are two different thoughts to keep in mind while watching the new trailer. The first is that this trailer could either contain quick moments from various episodes of the seasons, while the other point to consider is that the clips are possibly only from the season's two-hour premiere on Sept. 27. The latter seems the most likely, but if that's the case, we have quite the dramatic first two hours to look forward to later this month. After all, is it even Grey's Anatomy if an episode doesn't contain the holy trio of secrets, sex, and surgeries?

ICYMI, catch up on the first Season 15 trailer below before delving into the tiny clues from the footage that you may not have noticed. There's also a second, slightly longer promo that reveals some new drama not included in the initial trailer.

1. Something Dangerous Happens In The Operating Room

OK, so this isn't too much of a shock. We're probably overdue for some kind of explosive operation (no pun intended, but feasible, right?), and after featuring a quick montage of the show's most memorable moments, the teaser shows people in the gallery dramatically reacting to whatever is happening below. Does a threatening outsider crash a surgery? Is a patient inexplicably gushing blood? Does a doctor pass out during the procedure? In case we had any worries that the premiere would be as fluffy and sweet as the Season 14 finale, ABC kicking off the trailer with this chaotic shot definitely promises more thrills than romance.

2. Richard Might Be At The Center Of The OR Trauma

The teaser shows Richard in the operating room and jumping as something happens off camera. The next shot is that of observers reacting, and whether it's an operation gone wrong or an actual physical threat to Richard, he may have to deal with a medical emergency as soon as the season begins. Grey's Anatomy fans have debated about whether Richard will die this season, and as of Sept. 13, the only official Season 15 photos ABC has released are of Richard and Catherine. Is the network trying to tell us something?

3. There's Emphasis On An Old Clip Of Meredith Needing Her Person

Out of all of the past moments the beginning of the teaser features, the only one that includes dialogue is a Season 11 conversation between Meredith and Alex. Soon after Cristina left the hospital, Alex took on the role of Meredith's best friend, offering to be someone she could vent to or, in her words, become "my person." The term refers back to Cristina and Meredith's friendship, but when used in the context of the Season 15 trailer soon before the teasing of Meredith's surprise hookup with DeLuca, the old line seems to adopt a romantic tone. The fifteenth season is also billed as a year of love, so viewers are expecting Meredith to find romance in some way. Sooo, is DeLuca suddenly her Prince Charming?

4. Teddy Confides In Maggie About Her Pregnancy

The Owen-Teddy-Amelia love triangle is one of the season's biggest plot points so far, and ABC sneakily cut its first trailer to make it appear like Teddy is telling Owen and Amelia that she's 11 weeks pregnant. But if you watch the footage again, Teddy's confession is followed by a shot of Maggie looking perplexed, and viewers can clearly see Maggie's hair in the frame of Teddy revealing her baby news. The second trailer also confirms that Maggie performs Teddy's ultrasound, while Amelia doesn't quite trust Teddy being back in her and Owen's everyday lives.

Meanwhile, Kevin McKidd has hinted that Owen won't find out about Teddy's pregnancy and how he's most likely the baby daddy until a few episodes into the season. Although it's an interesting, fairly unexplored pairing, it looks like Teddy and Maggie will truly test their trust in each other in the premiere.

I understood ABC calling Nashville star Chris Carmack's new character an "ortho god" in press releases, but it was a little weird when the trailer showed the orthopedic surgeon, reportedly named Link, calling himself the ortho god. A hospital could always use an overconfident, young, and sexy surgeon, so maybe we can expect Link to clash with older, more experienced Grey Sloan Memorial doctors because of how self-assured he is in his field.

6. DeLuca Seems To Save Jackson And Maggie From Getting Hit By A Car

The second teaser for the premiere includes some juicier hints about what we'll see on Sept. 27, and that includes DeLuca diving in to save Jackson and Maggie from an incoming car. It looks like his rescue mission is successful, as the later half of the teaser shows Jackson in an enclosed operating space and slamming the window on a door that separates him from Maggie. The teaser also suggests that there's some kind of quarantine situation at the hospital. Whether Jackson and Maggie are feuding with each other or separated against their will at this climactic moment, the couple seems to have plenty of screen time for the beginning of Season 15.