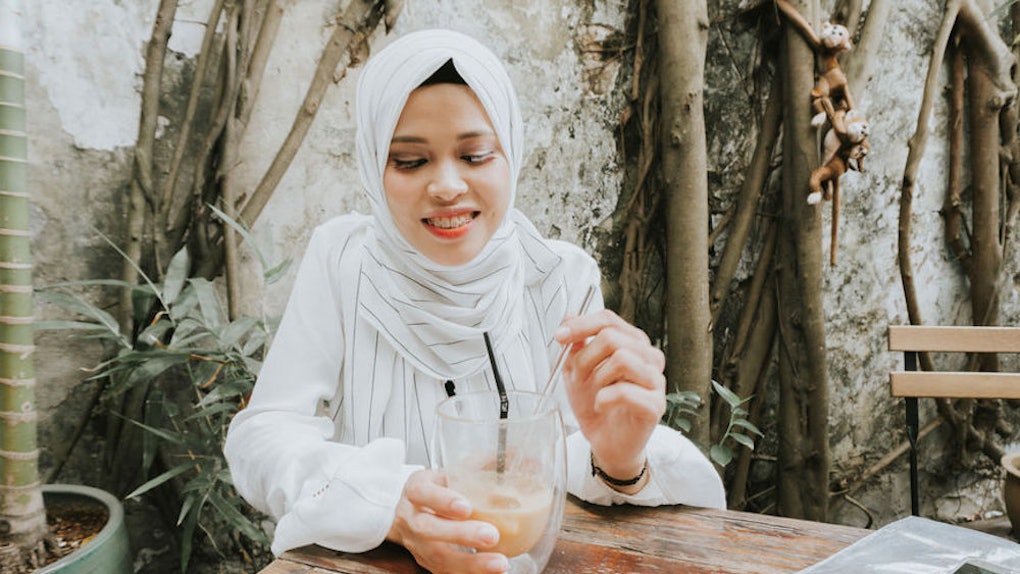 I'd say I've watched enough cooking shows on Food Network and Netflix to consider myself a novice foodie, and one of the lessons I've learned from hours of Chopped and Chef's Table is that presentation is super important in the food world. TBH, I always thought this was just a fancy, yet arbitrary requirement of reality food competitions and five-star restaurants, but according to new research, there's a real science behind the idea that you eat with your eyes first. In fact, there are a number of weird things that affect your taste buds, and it's not just limited to the way your food is arranged on your plate.

The new study, which has been published in the Journal of Food Science, revealed that your environment can affect how you taste certain foods. Here's how the experiment was done: According to ScienceDaily, food scientists from Cornell University gave 50 participants virtual reality (VR) headsets to wear, and three identical servings of blue cheese to taste. The participants had the chance to eat the blue cheese samples (though they didn't know the samples were all exactly the same) in three different VR settings: "a standard sensory booth, a pleasant park bench and the Cornell cow barn," as per ScienceDaily.

Although each blue cheese sample was identical to the others, the study found that the participants' experiences of the food changed based on their environment. In the cow barn VR experience, for instance, participants rated the blue cheese sample as significantly "more pungent" compared to the cheese they tasted in the other two VR settings. "We consume foods in surroundings that can spill over into our perceptions of the food," Robin Dando, associate professor of food science and senior author of the study, said in a statement, as per ScienceDaily. Isn't that so wild to think about?

Here are some other factors that might play a role in how much you enjoy your food — see for yourself if switching things up can make your meals taste even more delicious.

You probably know that your hormone levels fluctuate at different stages of your menstrual cycle. But what you might not realize is that those differences can have a pretty big effect on the way you taste certain foods. In a study published in the International Journal for Vitamin and Nutrition Research, researchers tracked the eating habits of eight women between 23 and 37 years old throughout an entire menstrual cycle. The research found that, when the women's estrogen levels were highest (i.e. during the week after ovulation), their taste buds were more sensitive to sweet tastes. And when their progesterone levels were at their peak (i.e. during ovulation), the women were found to be more sensitive to bitter tastes. Fascinating, right?

The temperature of your food

I'm a firm believer in the idea that, the spicier your food is, the less you can actually taste the flavors of the dish. While I'm not sure science agrees with me on that one, according to a study published in the scientific journal Nature, the physical temperature of your meal — not just the level of spice heat — can play a major role in how your taste buds respond to the food. More specifically, the research found that eating your food at a higher temperature can cause your taste buds to register more sweet flavors.

Well, I guess that explains my genuine infatuation with chocolate lava cake, now doesn't it?

The shape of your food

Do you have a strong affinity for a circular cake over a square or rectangular one? This isn't just an aesthetic choice, apparently. It's actually connected to the way your brain interprets taste. "Wondering why many desserts are circular? It’s because round food is perceived to taste sweeter," Charles Spence, head of Oxford University’s Crossmodal Research Laboratory, and author of the book Gastrophysics: The New Science of Eating, told the New York Post.

Hey, maybe that's why most people opt for baking round cupcakes over square ones.

That's right, guys — the simple choice of a fork versus a spoon might affect how your food tastes. In a study published in the scientific journal Personality and Social Psychology Bulletin, researchers divided 68 people into two groups and asked them to eat 10 kernels of popcorn, one at a time. While one group used their hands to eat — as most people do when enjoying popcorn — the other group was given chopsticks to pick up each kernel.

Typically, according to Robert Smith, an author of the study from The Ohio State University, as people get used to eating something, they enjoy the food less as time goes on. But in this particular study, he told TODAY.com, "we find that people don’t experience this same lowering of enjoyment when they consume food in new ways, such as eating popcorn with chopsticks or drinking water out of a champagne glass."

In other words, while it probably seems weird to eat popcorn with chopsticks, or sip wine out of, say, a small glass instead of your typical stemware, science says it just might make your food taste a whole lot better.

Do you usually eat meals like your favorite pasta or a tasty salad off of a plate rather than out of a bowl? If so, then you may actually be missing out on some of the flavors of what you're eating.

Think about it this way: As Charles Spence (aka the same dude from earlier who talked to the New York Post about how the shape of food affects your taste buds), told Quartz in an April 2018 article, since you're more likely to lift a bowl up to your face while you're enjoying your meal, you're automatically heightening your senses and your experience of the food. "That weight in the hand is likely to make your brain think the food is more substantial," he explained, "and you're likely to rate it as more intensely fragranced and aromatic than for exactly the same food sat passively on a plate."

So go ahead and enjoy a piping hot round cake, eaten with chopsticks, out of a bowl, during the week after you ovulate, and girl, it just might taste like the sweetest treat you've ever had.

More like this
These Cereal-Inspired Candles On Etsy Look & Taste Like Bowls Of Your Fave Breakfast
By Rachel Chapman
The Trendiest TikTok Recipes Of All Time That You'll Want To Taste With Your Buds
By Kelly Pau, Kaitlin Cubria, Marisa Casciano and Rachel Chapman
These 8 Mozzarella Sticks Recipes On TikTok Include Hot Cheetos & Onion Rings
By Rachel Chapman
Stay up to date