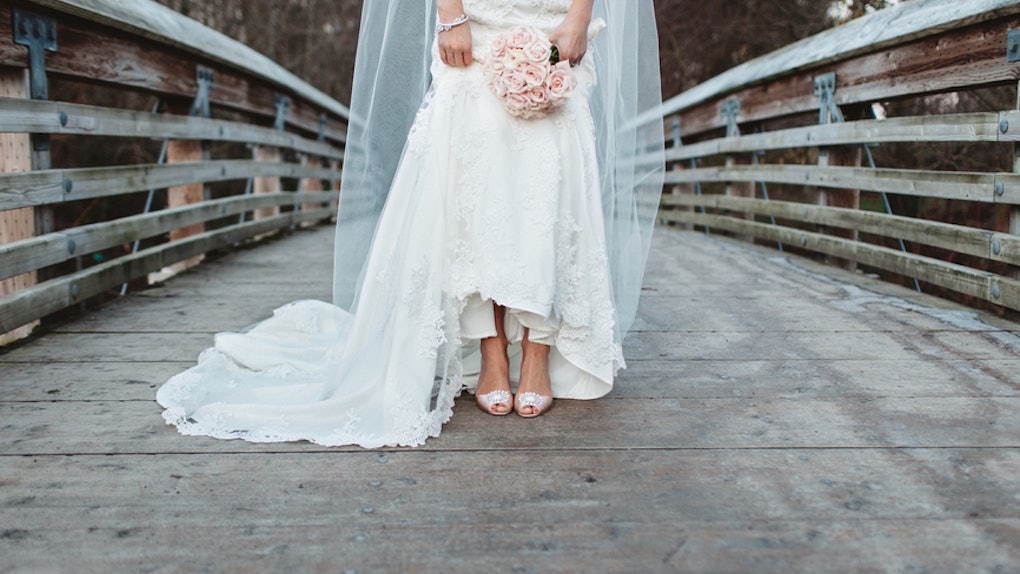 I've only been to one wedding during which I actually had the thought, "Are these people meant to be together?" I quietly shut that thought down, because every couple shows their love differently, I have no personal experience with marriage, and the notion of cringing at such an expensive event was troubling. However, because weddings are such expensive, well-planned events, it can be difficult to cancel one. Even if everyone is having the same thought: "Why are these people getting married?" Which is why when I found a Reddit thread of wedding photographers' signs that a couple wouldn't last, I was thrilled.

OK, so being thrilled at the thought of a thread discussing failed marriages makes me sound like a monster, which I promise I'm not! But I was truly curious to hear exactly what these photographers encountered that made them think, "This is a terrible idea." Taking photos of a couple on their wedding day is an incredibly intimate experience. Wedding photographers spend an enormous amount of time with the couple, direct them on how to pose, and get a good idea of what the couple is looking for when it comes to their photos — and how they communicate with each other about it. Here are some of the warning signs wedding photographers of Reddit witnessed while taking photos of soon-to-be-married couples.

1. They Acted Overly Smitten With Each Other

"I've shot a few engagement shots of people who ended up divorcing soon after the marriage. And honestly, not in the way you might think! Those couples seemed to be the most lovey-dovey and totally smitten with each other. I now think that the couples who are in trouble put on the biggest act to the world on how amazing their relationship is. So now that I have some experience with different couples, it's almost suspicious when they outwardly appear as being sooooooo in love."

As a total PDA hater, I can get on board with this theory. This is like the wedding equivalent of couples who post on Instagram daily. What are you trying to prove?

2. They Seemed Awkward Around Each Other

"Plenty of times. People have a look about them. A way they laugh and work together. An awkwardness of touching or being in proximity. Or those who latch onto each other almost in a mania."

I want to invite this photographer to observe my relationships just so I can test out her sixth sense for marriage success!

3. They Bickered A Lot

"When I used to shoot engagements, I would typically plan for 2-3 hours dependent on the couple and location, and would often shoot in excess of 200-300 frames. One couple bickered so much about poses, or facial expressions, or where to stand and where to look and anything else they could think of, that in the entire two hour shoot I took maybe 50 frames. They looked pissed in every single one. Heard through the grapevine they never got married."

This makes perfect sense to me, though I will add that many happily married couples commented on this particular post saying that they fought with their partner on their wedding day, but it was simply due to the stress. Weddings are a lot!

4. They Were Blatantly On Different Pages

"I shot the photos for my friend's cousin. her now husband came wearing dirty jeans, a ripped up shirt, and a Bud Light baseball hat. She was dressed to the nines, flawless hair and makeup. I got to the park first to scout locations they might like. I had already planned to take them to this little bridge with a waterfall behind. She was very excited, he could not have cared less. I took over 200 photos and I think he was actually smiling in five of them. Last time I talked to my friend I asked how they were doing now that they are married. he said that right after the wedding they got in a huge fight and she moved back in with her parents."

This seems like a case of two young people who had communicated ineffectively, even when it came to their engagement photo dress code. Bud Light hat!? I can't believe they went through with their vows at all.

5. They Looked Miserable... After The Photos

"Two high school sweethearts who were only in their twenties and had already been together over 10 years. When I took the first look photos (before the ceremony), they looked totally in love and smitten with each other. But the second the camera was off of them and we were walking back to the venue for the actual wedding, they looked like they were embarking on a death march."

This is eerie to me, and a great reminder to trust your gut: Don't get married just to do the thing society tells you to do, do it because you love your partner and want to be with them forever.