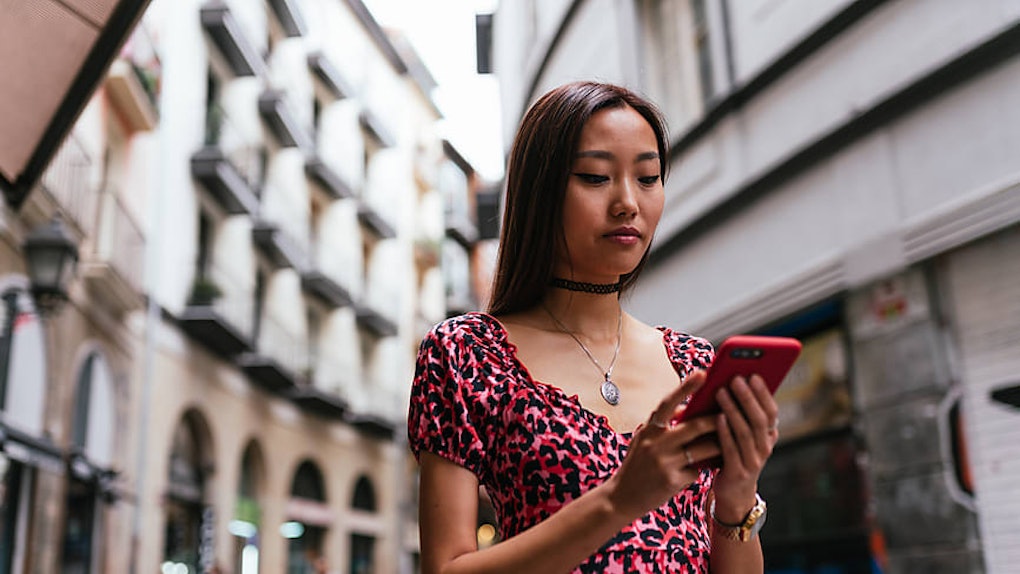 Red flags can come in many forms in your relationship. Sometimes, it’s your partner’s behavior toward you IRL that tips you off to the possibility that something is wrong — other times, it’s changes in your sex life (or rather, lack thereof). One of the most common ways to identify these red flags is by examining your communication, and it goes without saying that texting is among the most popular methods for keeping in contact with your boo. So, whether you know it or not, there are texting red flags from your partner that you should be keeping an eye out for.

One of the easiest ways to determine whether there might be trouble in your relationship via text is to look out for dramatic shifts in the way bae messages you. For example, if they’re texting far less frequently, taking far longer to respond, or their general language has become more distant or less affectionate, those shifts could potentially point to a problem. However, according to relationship expert April Masini, there are other specific kinds of texts that may spell trouble as well.

Wondering whether something is amiss between you and your boo? Then keep a lookout for these top texting red flags.

All Text, No Talk

Every couple has different work schedules as well as needs in terms of quality time — and of course, occasional busy weeks can get in the way of date night now and then. That said, Masini says if your relationship solely consists of texting, that can be a red flag. If a few weeks or more have passed since you’ve hung out, then that might signal that your boo is keeping their distance for some reason. Of course, there are valid reasons why you might not have seen each other in a while — like if they’re traveling for their job. But otherwise, it could be a classic case of “breadcrumbing,” which essentially entails leading someone on by giving them the bare minimum amount of attention to keep things going.

“Your partner is keeping you in their sphere, but not into you enough to date you regularly,” she explains. “Many people do this because it’s a way for them to not feel lonely and to get advice and support without investing in a real relationship.”

If your partner has avoided answering certain questions, it’s time to ask yourself whether it seems like they’re trying to hide something.

Keep in mind that there are ways to call your boo out on this without putting them on the defensive. After all, there may be a legitimate reason why they haven’t been able to answer you — such as if they feel vulnerable presenting certain personal information about their past, or they’re concerned you might judge them for their response.

“At first, make light of it and say, ‘Hey, you never let me know if….’ and give them another chance to answer,” suggests Masini. “If that doesn’t work, try a more assertive approach by asking, ‘Is there a reason you’re not answering my questions?’ This still gives them the opportunity to explain.”

Are you the one that’s always reaching out over text, whether it’s to say good morning, share a bit of exciting news, or check in after work? That’s another signal worth paying attention to, according to Masini.

She notes that it's important to consider whether your partner just isn't big on texting in general, in which case you may not want to take it personally. Also, she points out that if they have a hectic job that prevents them from texting you regularly, that’s a factor worth considering as well.

But if they pretty much never initiate the conversation, that could be a red flag that there’s either an imbalance in how invested you both are in the relationship or a significant incompatibility in terms of your communication habits.

"If everything else is fine in your relationship, you might want to let this one go," adds Masini. "However, if this behavior is indicative of other behaviors like not initiating dates or sex — then have a conversation about how you’d like things to be and ask if they think that they can step up their initiating or not."

It’s totally normal for your partner to want to be in the loop on what’s going on in your life. However, there’s a difference between asking where you’re grabbing dinner with friends tonight or when that job interview is and constantly needing to know where you are and who you’re with every hour of every day. So, be wary if your boo constantly checks in to see what you’re up to, as that may be a possible warning sign of controlling tendencies.

Does bae randomly drop off during conversations? That’s another potentially shady texting habit to keep an eye out for, as it can suggest that they’re either prone to flakiness, or point to another problem altogether.

“If someone frequently texts you to get together, and then when you respond with a yes, they go silent, only to pop up again a few days later as if nothing has happened, that’s a red flag,” says Masini. "It's disrespectful."

Also, take note if they often say something along the lines of “I’ll keep you posted” when you try to make plans as a way of putting off committing to anything. There are several possible explanations for this (like if their work schedule is unpredictable), but sometimes, it can indicate that they’re waiting to see if a better option comes along.

It’s crucial to keep in mind that a red flag is just that — a warning sign. So, it doesn’t mean there’s definitely something wrong between you and bae. It does, however, point to the possibility that you may need to take a deeper look into your relationship. By recognizing these red flags from the get-go, you can address them head-on with your partner. From there, you’ll have the chance to either clear up any misunderstandings or shed light on an aspect of your relationship that needs improvement. In other words, it’s a win-win. Red flags may sound scary, but really, they don’t spell relationship doom — in fact, they provide opportunities to hone in on possible cracks in the foundation before they become larger issues.