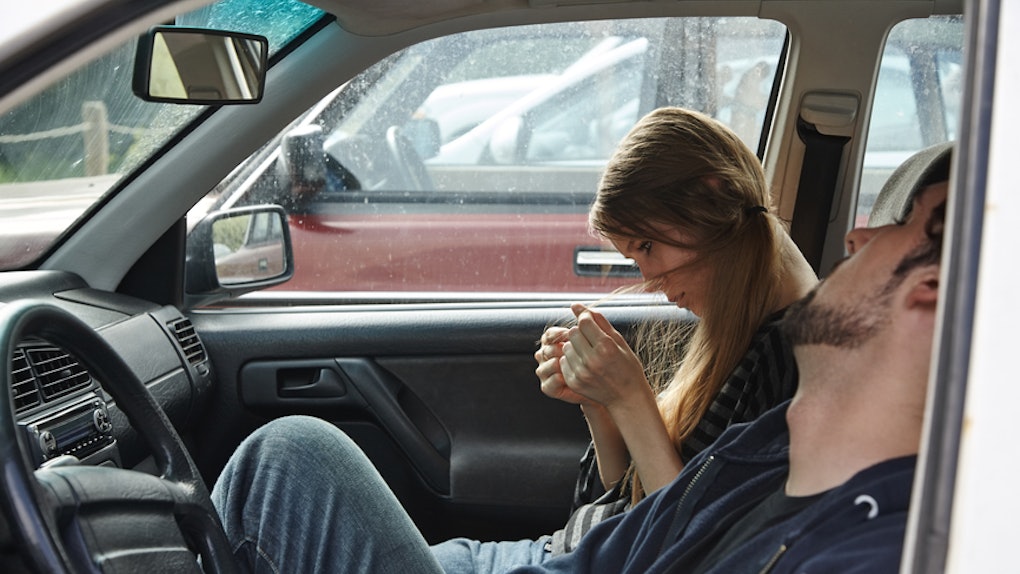 I have to admit: I'm toxic. And not in the fun, Britney Spears song way. More like in the "whoops, I ruined all my relationships again" kind of way instead. I always wondered what the actual signs you're the toxic one in the relationship were — because my partners telling me that my behaviors were unhealthy simply wasn't enough to believe it. Me? Doing something wrong? Never!

I always blamed my failing relationships on incompatibility, or partners who simply weren't strong enough to keep up with me. "They just didn't have what it takes," I'd always say, placing the blame on everyone else. They just didn't get me. But what if the harsh reality was this: me was actually kind of awful?

And unfortunately, I was. When I look back on the relationship behaviors I engaged in during my 20s, they were incredibly chaotic. I'd put partners through elaborate tests to gauge how much they truly cared for me. I'd try to make them jealous, because I associated jealousy and drama with love and attraction. I feared intimacy and vulnerability, yet demanded it from everyone else who associated it with me. It wasn't until I became aware of my own toxic behaviors that I was able to work on them, heal, and begin to have healthy relationships in my life.

So I asked dating coach and online dating expert Meredith Golden at SpoonmeetSpoon signs that you're the toxic one in your relationship, and how to fix it. Because we all deserve healthy, functional relationships in our lives — and they have to begin with you.

Golden asks, "Do you avoid saying nice things or withhold compliments when your partner deserves one?" Because we all want to hear compliments from the people we care about. If you're intentionally holding back pleasantries from your partner in an attempt to make them feel bad, then you're causing purposeful harm to your significant other, and to your relationship.

She provides a solution: "Telling someone they 'look nice' or did a 'good job' can make someone feel noticed and it's a completely free gesture. Get in the habit of telling your person something positive each day."

I used to be a major flirt around my ex to see his reaction, especially with his friends and with waiters. If it got him angry, then I knew that meant he cared about me. Sick sh*t, right?

Golden asks, "Do you flirt with your significant others friends — openly or otherwise? I see this often. You think it’s harmless and playful, but it’s beyond destructive and toxic and can leave your partner feeling humiliated/not good enough. There are several ways to fix this, but I think an aggressive approach should be exercised here. Abort this behavior immediately."

The way to find out if someone cares about you is to gauge the happiness, love, and respect that exists within your relationship. Not to test your partner's jealousy.

Golden asks, "Do you alienate your significant other's family and avoid spending time with or including them? This creates unnecessary tension and forces your partner to choose between you or his family. This scenario rarely ends favorably."

If you're intentionally isolating your partner from their friends and family, this is not only toxic, but could be an impending sign of emotional abuse. What should you do to solve it? She continues, "The fix is simple: Stop this behavior. There’s enough of your boyfriend/girlfriend to go around. "

I once tried to break into my ex's phone so many times in a row that I got locked out of it. Needless to say, this wasn't the first time something like that happened. In my past relationships, I was definitely guilty of snooping, whether it be through phones, computers, emails, or social media accounts.

Do you check your partner’s phone and email and constantly check in on him/her? Excessive snooping creates a toxic atmosphere of mistrust when sometimes there’s nothing warranting the behavior.

Foundation should be the trust of your relationship, and if you don't have that with your partner, do you really have anything else?

One of my worst relationship behaviors was being mean to my partners — borderline emotionally abusive. I'd emasculate the men I dated in order to make them feel weak and in need of me. If I berated them until they were incredibly insecure, then they'd never have the confidence to leave for something better, right?

Golden says, "We all get angry and disagree sometimes, but there’s a fine imaginary line that shouldn’t ever be crossed. If you’re getting excessively nasty during disagreements and making below the belt comments, you’re the toxic energy. " While this can be hard to finally realize, once you do, you can finally make the move to self-improve both you and your relationship.

So if you recognize any of these qualities in yourself, it's probably time to do some introspection. You might be engaging in toxic behaviors that could be the downfall of your relationship. The good news is that once you identify the problem, you can move right on to the solution. And if I could change from a toxic partner to a totally great one, then so can you.