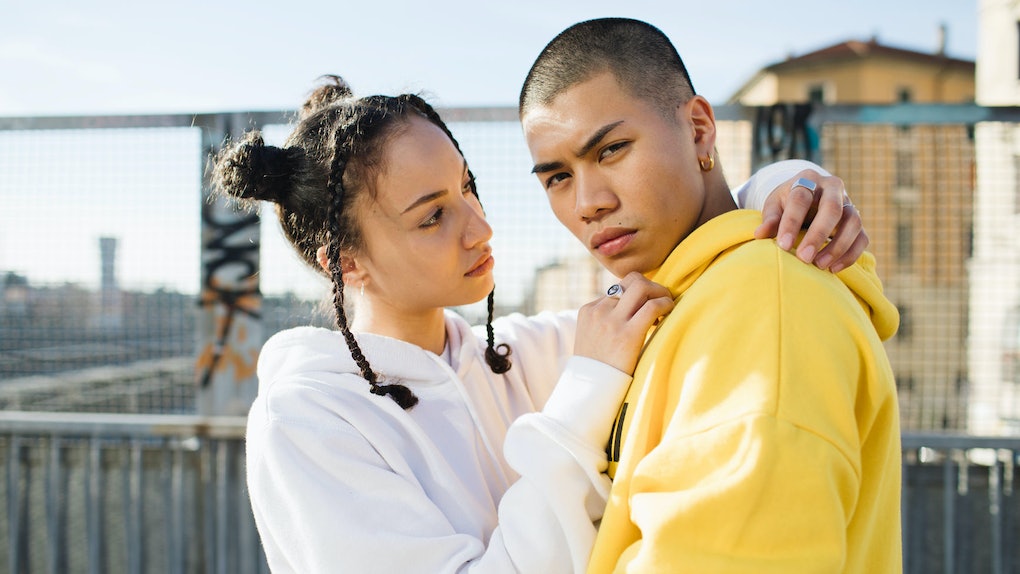 It’s definitely possible to have too much of a good thing — Prosecco, pizza, that new Cardi B jam, and bae included. Particularly when you’re embarking on a new relationship, you might not be able to get enough of each other, so it’s only natural to find yourself hanging with your partner a ton. But how do you know if you’re spending too much time together?

Of course, quality time is important for ensuring that a relationship grows. Sharing experiences can give you common memories, and therefore, a stronger bond, after all. Moreover, gaining a deeper understanding of each other’s desires, fears, pet peeves, habits, and other quirks can help you to become a better partner in the long run. So it’s no surprise that couples feel nearly twice as happy when they are together as opposed to when they're apart, according to 2015 research published in the Journal of Marriage and Family. Additionally, couples reported that their activities hold more meaning when they’re with their SO. But before you start clearing your schedule for bae, consider this: Having adequate space is even more important to a couple’s happiness than having a good sex life, according to a study called The Early Years of Marriage Project.

There are also red flags that you're spending too much time with your SO that are somewhat more obvious. Examples include feeling as if you have nothing to talk about, or like you don’t know what to do with yourself when you’re apart. But what about the subtler signs? If you notice any of following beginning to develop in your relationship, you may need to ask for some breathing room from your partner.

You’re Out Of The Loop

Last time you had brunch with the girls, it sort of felt like you had been living under a rock. Since when did Kara get promoted? Wait, Hailey’s moving in with her boyfriend? But didn't they just start dating? Oh, it's been nine months.

If you’re consistently playing some serious catch-up when you see your friends, that’s a big sign that you’re missing out on a lot — and it could be because you’re spending too much time with your SO. Remember: Your friendships were a priority before you started dating this person, and if you want to maintain them, you need to make sure that they stay a priority. Make it a point to show that you’re still interested and engaged in your friends’ lives, or they may very well stop filling you in. Which brings me to the next sign you need to cut down on bae time...

You're Not Getting The Invites

Ouch. Maybe you spot an Instagram pic of your squad at a beer fest, or you watch a Snapchat video of a housewarming party at your girlfriend's new digs. FOMO is so real, and it stings especially hard when you weren’t invited to something. But take a second to consider why you were left out in the first place.

Is it possible that you weren’t invited because it was assumed that you wouldn’t come — or worse, accept the invitation and then flake last minute to hang with your boo? When you’re almost always saying “no” to invites and spending every waking moment with your significant other, people may very well start giving up on including you. Make sure you’re not skipping every outing in favor of some Netflix and chill time, and your friends might be more likely to reach out about the next get-together.

Don't be afraid to bring it up with your friends if you continue being left out of plans. That way, you can clarify whether there's another reason altogether why you're not getting the invites.

Bae Is Getting On Your Nerves Nonstop

Sure, it’s normal to get a little annoyed at your significant other every now and again, whether it's because they forgot to take out the trash again or they're doing that passive-aggressive thing they do when you're running late for date night. It’s not normal, however, to get irritated at every little thing they do — like breathing too loudly. Or, you know, sitting a certain way.

So if you find that your SO is starting to get on your nerves for literally no reason, that could be a strong sign that you need some space.

You Can't Remember The Last Time You Chose To Be Apart

Real talk: When was the last time you spent an entire day without your partner? And no, it doesn’t count if you were at a work event all day, or traveling, or had some other obligation — I’m talking about a whole day when you chose not to be together. If the last time you did that was months ago, then you definitely need to take a step back from your SO. It’s healthy to voluntarily spend some time apart, whether that’s because you're simply craving some "me time" to recharge or if you feel like you need to spend some quality time with family.

You’ve Literally Run Out Of Things To Talk About

Sharing some silence on a long car ride or taking a stroll after dinner isn’t just norma — it’s a sign of a healthy relationship. You should be comfortable merely existing with your partner and not talking. However, if you feel like you’re regularly running out of things to talk about, then consider that your bae overload might be to blame. When you experience everything together, you will probably have little to share with each other.

When you see something hilarious on the subway, have an inspiring interaction with a stranger, or experience a mind-blowing meal at that new tapas joint downtown, your SO is likely to be the first person you want to tell. If you give yourself some space, you might find that you have more to fill them in on the next time you see them.

You know what they say: Absence makes the heart grow fonder. And if any of the aforementioned issues sound familiar, it might be time for you and your boo to talk about how you're feeling, and suggest potentially taking a bit of a breather.