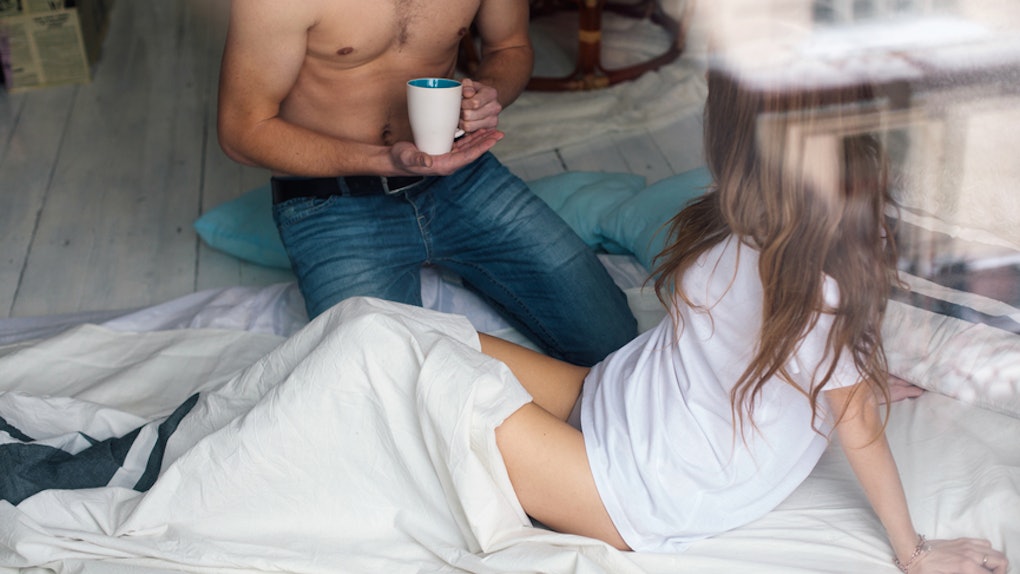 For those of you who haven't discovered the joys of a lazy morning romp, it's time to change that. While a case can always be made for the extra-sexiness of a late-night sex session, morning delights definitely deserve some attention of their own. But don't just take my word for it. Trying some quick morning sex positions yourself may be just the thing you need to get your day off to a good start.

Anyone with a busy schedule knows that leaving intimacy for the end of the day sometimes means you don't end up having the most satisfying experience. Chances are, you're probably tired and already stressing over all the stuff you're going to have to deal with the next day. While banging it out has certainly been known to be a source of stress relief, nothing beats getting out of bed, ready to conquer the day with that amazing post-orgasm zen. While some might argue that all that eye-crustiness and bad breath is enough to dampen the sexiness of the experience, seriously, you can just walk yourself on over to the bathroom and brush your teeth really quick. Anyway, here are five prime sex positions that give a new meaning to "rise and shine."

Spooning doesn't have to be just for cuddling. While swinging from the chandelier and pulling out your most acrobatic sex moves can be totally fun, sometimes, you just need to get off without exerting a ton of energy. Not only does spoon sex eliminate the horrors of morning breath, but you also don't really have to move that much. This is perfect when you're feeling extra lazy. The little spoon should just lie on their side, and bring their top leg up toward them, allowing the penetrating partner to enter them from behind.

Who doesn't love waking up to a pancake? According to Bustle, this modified version of doggy style is way less intense than the traditional position, with all the usual perks. The orientation of your bodies is pretty much the same as it would be for doggy, but instead of holding yourself upright, you're basically just lying on top of each other. The giver has easy access to all of the receiver's erogenous zones. Plus, you both get to enjoy a more relaxed time.

First off, let's just start by acknowledging how underrated reverse cowgirl is. It boasts all the perks of a woman on top position, without the added pressure of feeling like you have to put on a show. (And let's be real: With sleep caked in your eye and dragon breath, it's comforting to know the giver will probably be way too preoccupied with the view from behind to even notice.) If you're unfamiliar with this position, it's super easy: The penetrating partner lies on their back, while the receiver straddles their pelvis, facing away from them. The front-to-back orientation also allows for a nice change of pace in the clit stimulation department.

This unique take on traditional missionary is perfect if you want to stay in your comfort zone, with a twist. Instead of the giver penetrating the receiver in the usual parallel position, the giver positions their body to the right or left — so both of your bodies form an X shape. This position allows for most of the perks of missionary, again, with the added bonus of no face-to-face contact.

Morning sex might not be everyone's cup of tea, but don't knock it 'til you try it. Adding a couple of morning bangs to your usual routine might turn out to be a welcomed change.