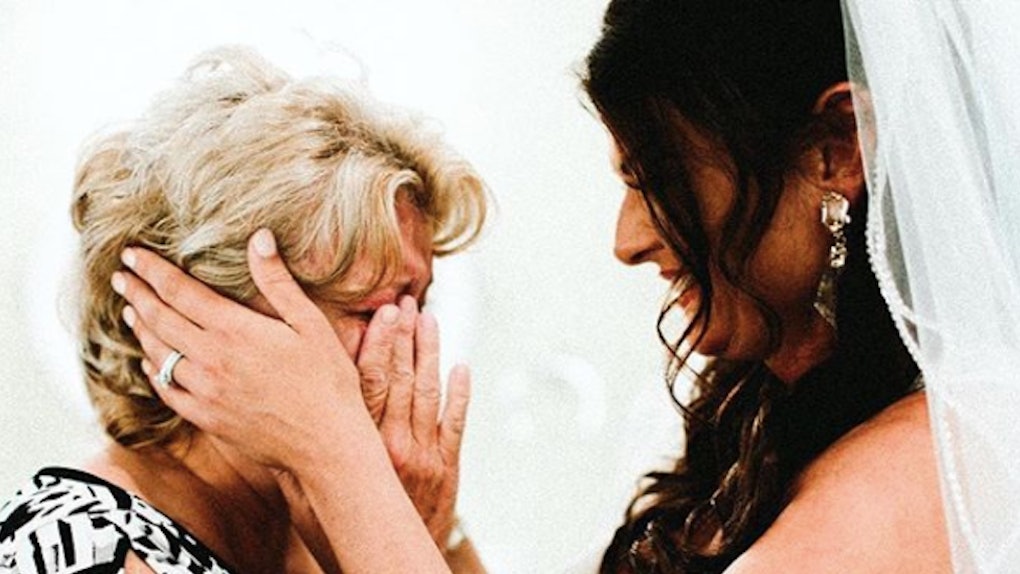 Here's a wedding ritual you don't see too often: photos of moms walking their daughters down the aisle. In fact, I can't think of any wedding traditions that explicitly call for the mother of the bride. The groom and his mother typically share a dance (much like the father-daughter dance) but what do the bride and her mom do?

Well, according to Brides, in some Jewish ceremonial processions, it's traditional for the mother of the bride, the groom's parents, and the grandparents to join in. But that's not necessarily the case for all cultures or religions.

More often than not, most of the M.O.B.'s work happens behind the scenes, like helping the bride choose the perfect hair accessory or coordinating details of the reception.

The father of the bride, on the other hand, usually plays a much more visible role in the wedding as he's often asked to walk his daughter down the aisle. Traditionally, dads have done this for two reasons. The first is to indicate that the bride is no longer her father's property and now belongs to her groom. The second, less practical reason is to scare the groom into upholding his end of the bargain. No one wants a runaway groom!

Regardless, I think we can all agree that this archaic wedding tradition is purely symbolic now, which means it doesn't have to be a dad walking his daughter down the aisle. Anyone whom the bride feels strongly about can assume this position, moms included. These five photos of moms and brides are here to prove just that.

A mom will do anything for her daughter on her wedding day and on any other day, too.

Photographer Saj Sidhu of PhotoKitch explains that in traditional Sikh wedding ceremonies, the handing of the palla (the scarf or shawl passed from the groom to the bride) is normally a father's job. It's like a father walking the bride down the aisle. But in this case, the bride's father passed away years before her wedding. "Usually, another male figure steps in. This is the first time in my eight years of shooting Sikh weddings, I saw a mother give away her daughter. Very, very uncommon. In fact, I've never seen it anywhere else," Sidhu says.

She's happy if you're happy.

Photographer Danielle Rabbat of Rabbat Photography captured the excitement of both bride and mom in this happy shot as they walked down the aisle together. It's clear from their wide smiles that these two are grateful to have each other on such a momentous occasion.

She'll hold your hand just like she did when you were a kid.

Your mom knows just how to calm your nerves, even if you don't. Trust her — she's been doing it your whole life. She got you through the SATs and she'll get you through this, too. This intimate moment was captured by Elario Photography and I'm sure glad it was.

You can always lean her for support.

Traveling photographer Jodi Bodtke of Giving Tree Photography features stunning and emotional photos of brides and their mothers in her wedding collections. She took this candid photo right before the bride and her mom strutted down the aisle side by side.

She's your only true #day1.

Another photo by Bodtke, she says, "Here’s to all the mamas who made us who we are." I'll toast to that!

Just think, if Meryl Streep can walk her on-screen daughter Amanda Seyfried down the aisle in Mamma Mia (even though she had three dads), you and your mom are in excellent company.

Think of it less like she's giving you away and more like she's guiding you through this next step in your life. If your mom has always held a special place in your heart — often playing the role of both parents, after-school tutor, confidante, and mentor — I'm betting she'll do just as great in her next role as mother of bride (who walks you down the aisle).