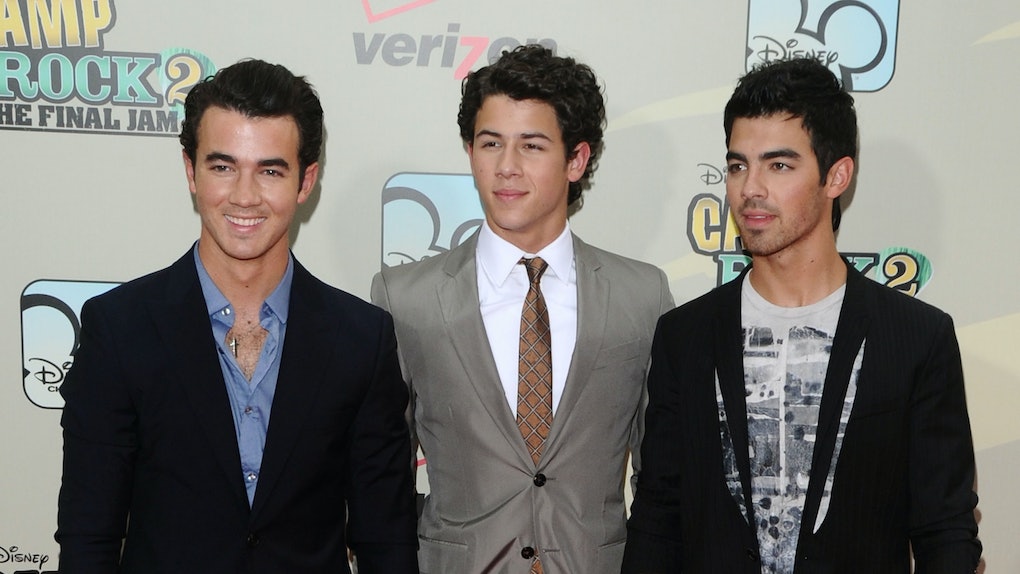 It's 2019, but it may as well be 2009 after the major dose of nostalgia the Jonas Brothers just delivered. The band of brothers officially reunited after originally splitting in 2013 and released a new single, "Sucker," on March 1. Even if your middle school crush on one of the guys never went away, your memories of their TV and movie work may have. If you want to keep reminiscing about the simpler days of the group' Disney reign, we've got you covered with Jonas Brothers TV and film moments you forgot about. Am I the only one just burnin' up with memories right now?

Debuting as a boy band in 2005, Kevin, Joe, and Nick Jonas first swept up starstruck audiences thanks to their musical performances. Their work as singers and musicians segued into roles as themselves on a 2007 episode of Hannah Montana, leading to their parts in the Disney Channel Original Movie Camp Rock and their own Disney series. When their time with Disney winded down, youngest brother Nick initiated the conversation about parting ways as a band. The breakup was solidified by October 2013. Nick and Joe pursued their own music careers while Kevin and his wife began a family. If there was any definite sign of your childhood ending, that split was totally a contender.

Now with their new collaboration "Sucker" out in the world, the JoBros are back to giving us catchy bops to belt to in the car, but I'm not ready to mourn their acting careers just yet. We can probably count out the possibility of a Camp Rock 3 anytime soon, but I need to take a moment for the handful of years when the Jonas Brothers regularly blessed our screens. Do you remember these standout roles?

Known as JONAS L.A. in its second year, this show came at an awkward time when a lot of the band's core demographic was aging out of Disney Channel. It debuted in 2009 and only lasted two seasons despite the brothers playing fictional versions of their pop star selves. Containing a lot of cringe-worthy acting, the series never lived up to the lofty expectations that the guys' names created. Joe even slammed the show in his tell-all Vulture piece in 2013, writing, "Some of the writing on it was terrible. It just ended up being some weird slapstick humor that only a 10-year-old would laugh at."

On the bright side, JONAS not working out allowed the group to pursue more adult opportunities, including a Broadway stint for Nick.

2. Their Appearance On 'Hannah Montana'

If you somehow didn't know who the Jo Bros were before this, you were in love before the credits even rolled on this Hannah Montana episode. Playing themselves, the brothers pursued a collaboration with Hannah Montana before bonding with Robby Ray and distracting him from working with Miley on Hannah's music. Featuring the band's Disney Channel acting debut, the episode is pretty iconic for Hannah Montana fans.

Reportedly dating Nick at the time, Miley Cyrus then went on her Best of Both Worlds tour alongside the Jonas Brothers. TBH, we could save how legendary the Disney dating pool of the early 2000s was for a whole separate post. While Niley is long over, fans' minds were recently blown when both stars attended the Isn't It Romantic premiere to support their spouses' work in the film.

3. Their Musical Numbers In 'Camp Rock 2'

I'll admit to still having a few Camp Rock songs on my iPod, but Camp Rock 2: The Final Jam is another story. Premiering in 2010, the sequel received mixed reviews compared to the first movie. Most importantly, none of the songs really stuck like Camp Rock's music did. You can probably still sing the first movie's "Play My Music" from memory, but I know I'd pull a Kevin Jonas and have to mouth along a little uncertainly to any song from Camp Rock 2. Maybe the band will bring back some of the forgotten hits from their Disney days, but for now, I'll try to reacquaint myself with this movie soundtrack.

4. Their Sibling Rivalry At The Disney Channel Games

Does anyone else just stop and marvel about how the Disney Channel Games existed? In epic mashups that made tweens' dreams come true, stars from Disney shows all over the world gathered for three consecutive summers to compete against each other in Olympics-style games. They were also hosted by the dynamic duo of Mr. Moseby and Arwin the janitor from The Suite Life of Zack and Cody. What more could you ask for?

In 2008, the brothers were on three different teams at the DC Games. With their hair at its peak curliness and their Disney profile hitting the roof, the trio's sibling rivalry was a highlight of the games that year.

Following the band on their When You Look Me In The Eyes tour in 2008, this mini reality series was what you'd see in between, say, an episode of Wizards of Waverly Place and the premiere of a new DCOM. Cameras took fans behind the scenes of preparing for the tour and living life on the road. Episodes were packed with brotherly affection and cameos from folks like Demi Lovato, bodyguard Big Rob, and youngest sibling Frankie, aka the "Bonus Jonas." It's clips like these that remind fans just how much the family shared with the public in their heyday and what great people the brothers grew up to be.

Welp, time flies when you're admiring the past. Who knew we'd be just as invested in the Jonas Brothers now as we were a decade ago?

ICYMI, check out the Jonas Brothers' latest single "Sucker" below.

More like this
The 'Glee' Cast's Tribute To Naya Rivera At The 2021 GLAAD Media Awards Was So Moving
By Abby Monteil
Is Netflix Making A 'To All The Boys' Spinoff Series About Kitty? Here's The Tea
By Rachel Varina
The Soundtrack For Netflix's 'The Irregulars' Season 1 Is Such A Vibe
By Ani Bundel
Stay up to date