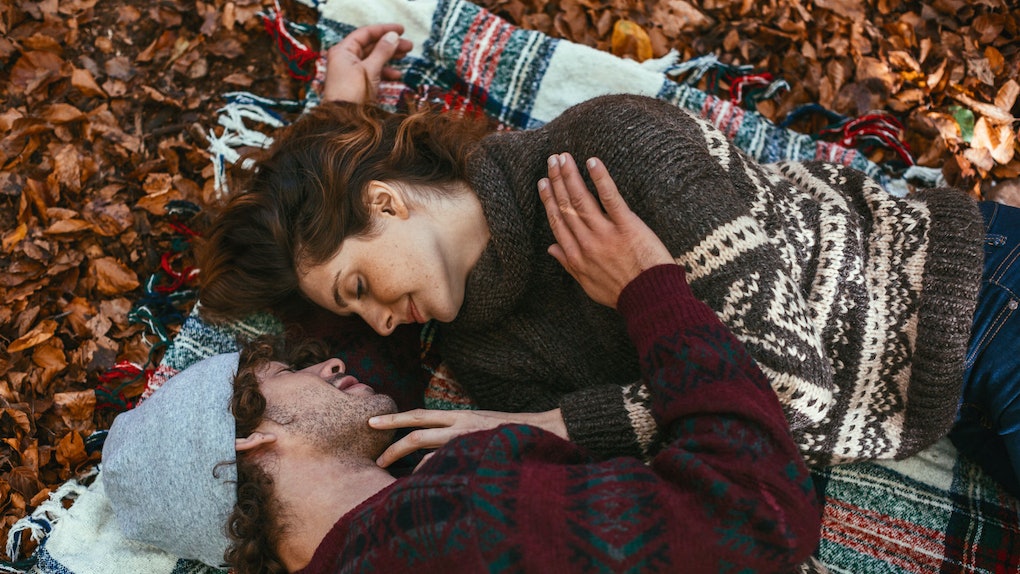 It’s no secret that as the carefree, flirtatious nature of summer winds down and autumn arrives, many singles are looking to lock down a boo to spoon all winter long. But are there any cuffing season success stories, or are these cold-weather romances bound to fizzle out come March?

The bottom line is, we’re a little more prone to loneliness during the colder months — we’re less inclined to go out, which means a relationship starts to look a lot more appealing. Whether your ideal night in involves watching a football game with a few seasonal brews or whipping up some chili and warm beverages, the truth is, #hibernationmode can be more fun when you have a partner in crime. Plus, by dating someone come fall, you're guaranteed to have a date to all those holiday parties that are approaching. Some say these relationships are merely a fleeting series of snugglefests that are bound to end as soon as you start swapping your cozy sweaters for crop tops. But do they have the potential to grow into something serious that extends well past the colder season?

According to Facebook data from 2010-2011, people are more likely to change their status to "in a relationship" between the months of October and February, and many people change it back to "single," in March. But don't worry — that doesn't mean that all cuffing season romances are doomed before they even begin.

Here are a few cuffing season success stories stories to warm you up as the temperatures drop.

She snagged him at the last minute.

I met him the first week of February, if that counts? Met on a dating app and it’s been going really well since then!

She stopped playing it cool.

We worked together, and TBH, I was into him from day one. Since we were collaborating on a project, though, it took me months to get up the courage to do anything about it. Finally, one cold night in November, he gave me a ride home and noticed that my air conditioning unit was still in my apartment window despite the fact that summer was long over. He offered to take it out for me sometime, and I instantly used that as an excuse for him to come over and hang out the following Sunday. A week later, he came over with a homemade pizza that he had whipped up for us, and we got cozy on the couch watching the Pats game. That was the first of many lazy Sundays snuggled up on my sofa all winter long.

She was smitten in disguise.

We met at a Halloween party at a local bar. I was dressed as Bettie Page, and he was dressed as a hipster (because apparently, he had to scramble to put together a costume last minute). When he approached me to introduce himself he said, “Hey Bettie,” and I was pretty impressed that he even knew who I was dressed as. We started talking about bacon for some reason, and he got my phone number before leaving. A week later we had dinner, and the rest is history.

She was brave enough to risk the friendship.

We had been friends for a while. I finally got up the nerve to kiss her while we were hanging out over Christmas break. Turns out she had been wanting to hook up too, but was too shy. Good thing I made a move… we’ve been together for over a year now.

She reconnected with an old crush.

I had a crush on him back in high school but never did anything about it. During my first semester of college, I went home for Thanksgiving and saw him at a pub in our hometown. We started talking and next thing I knew, we had plans to hang out in Portsmouth, where we were both going to school. We’ve been together for almost two years now, and we both think it’s pretty funny that we started dating in college, but barely talked in high school. Timing is everything, I guess.

Looking to lock something down during cuffing season? While some might say that these relationships are the cold-weather equivalent of the summer fling, the fact is that people can pursue lasting relationships regardless of the time of year — and these success stories should serve as proof.

When it comes right down to it, what matters most is that you're entering into a relationship for the right reasons — as in, you want to be with them because genuinely see a future with them and feel compatible with them, not because you want someone to keep you warm on those frigid nights and be your arm candy to the office holiday party. As long as you and your potential bae are on the same page about your intentions for continuing your relationship past the winter time, there's certainly a chance that your romance will bloom well into the spring. Happy cuffing, y'all!