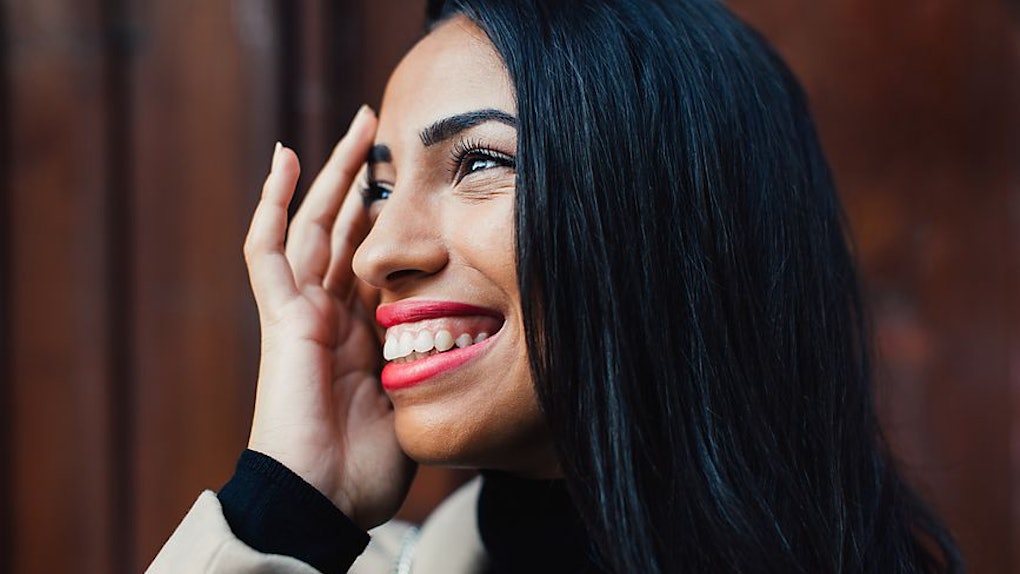 I never know what to say to someone on Tinder. I mean, people are all probably messaging one another the same thing. Whether it's the waving emoji, a smiley face, or just a long "hiiiiiii," eventually all openers just blend in to one another. So what are some messages to send your Tinder match that will actually make you stand out? Because otherwise, you might never get a response, or your conversation will just fade out into oblivion.

I used to message guys saying "we're exclusive now, right?" but they didn't get the humor in that, and it just scared them off. So it's a delicate balance between showing off your personality, being flirtatious, and saying something unique that will help you to create a rapport with someone online — one that will hopefully turn into a date IRL.

So here are some creative Tinder messages to send to your crush that will make you stand out. Because in this online dating environment, it's important that you differentiate yourself from the pack.

"You're Not A Murderer Or Anything, Are You?"

These days, you never really know.

It's always been strange to me that we just decide to implicitly trust the people we meet on dating apps without knowing anything about them. It feels pretty unsafe to me! So ask the question everyone is thinking — are you a murderer? A sociopath? Am I going to wake up from our date in a bathtub full of ice, missing some valuable internal organs that you will subsequently be selling on the black market?

Hopefully they will know it's a joke, and if they don't, they're a murderer without a sense of humor, which is the worst type of person to date, in my opinion!

"Why Did You Swipe Right On Me?"

Because at the end of the day, that's all you really want to know, and most likely, no one else has the guts to ask the question. I always wished I had the courage to just explicitly ask someone "what is it you like about me?" So why not go on and ask it? If your match has the courage to respond, then they're definitely the type of person worth getting to know and potentially having a relationship with. Talk about good communication skills from message one!

"You Have The Same Name As My Ex. I Wonder If That Means Anything."

This message is definitely a hit or a miss, but has the potential to become a conversation starter. If your match is competitive in nature, it could drive them to respond saying something like "I'm better than your ex," which could lead to a lively debate.

Additionally, in an online dating world full of "hiiiiiiii's," this line is super to stand out — for better or worse.

"If You Could Plan The Perfect First Date For Me, What Would We Do?"

This is like utilizing The Secret. If you built it, they will come. If you plan the first date, it will manifest itself. Additionally, this message puts you in a power position. Frequently on dating apps, you reach out to someone in hopes that they will like you, or hope you're interesting. We forget that we hold the power, and that we ourselves are a prize. So by messaging someone and asking them how they'd pamper us on a first date, it demonstrates value, self-worth, and shows that you are confident — all desirable traits in a partner that are bound to get you not only a response, but a first date.

"Tell Me About Your Childhood Trauma! JK! Hey How Are You?"

One of those most ironic things to me about dating is that we spend a lot of time hiding the worst, most private versions of ourselves from someone for several months until we are absolutely sure that they like us so much that the sight of who we truly are won't make them run far, far away. So why not stop beating around the bush, and ask someone all about their character flaws and traumas right off the bat? But then tell them you're joking of course (even if you're kind of not). This message is sure to get an LOL from your match — because we'd all kind of like to know this stuff about our potential partners —and lead to an interesting conversation, one way or another.

When it comes to dating apps, it's important that you differentiate yourself from the pack. So why not give one of these opening lines a try? It's worth the shot. The worst thing that happens is a stranger doesn't respond to you — and as I always say, rejection is just protection anyway.

More like this
10 Questions To Ask Your Tinder Match
By Cosmo Luce
Lauren Speed-Hamilton Is Hosting 'Match Me If You Can,' Your New Favorite Dating TV Show
By Hannah Orenstein
6 Zodiac Sign Pairings Least Likely To Fall In Love
By Rachel Shatto
Stay up to date