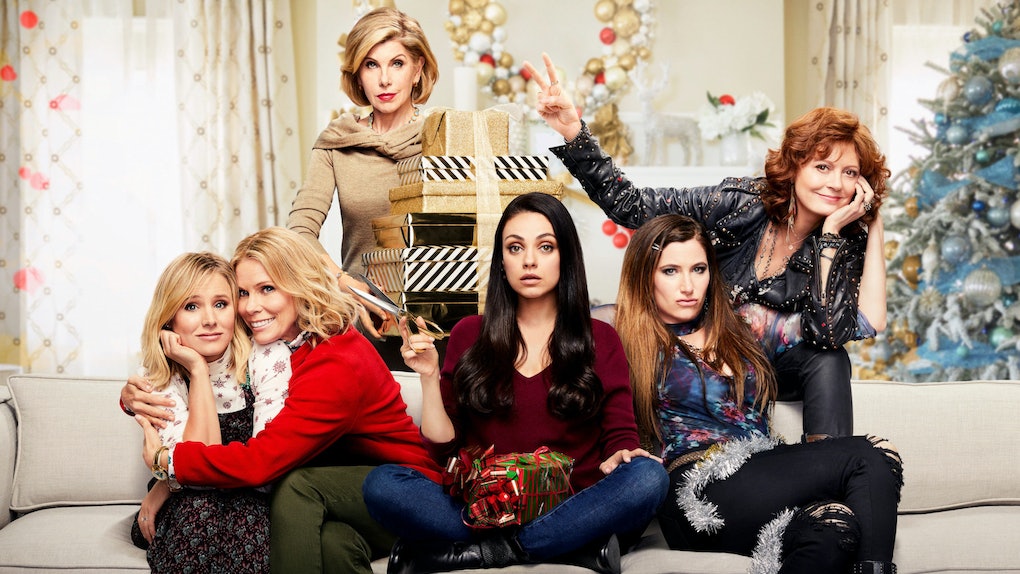 It is officially the most wonderful time of the year... because the holiday season gives you a break from school or work to just lie on your couch all day binge-watching movies. This year, holiday movie lovers have more options than ever when it comes to getting in the Christmas spirit. Netflix, Hulu, and Amazon are always available, not to mention channels like Hallmark, Lifetime, and Freeform, which air Christmas movies nonstop in December. And Showtime is also bringing the joy — here are the Christmas movies on Showtime that you can either catch on the cable channel or binge on the network's website.

Christmas can be a magical time, but it can also be the most stressful time of the year when you have some particularly overbearing relatives. That is the truth that A Bad Moms Christmas fully embraces. As a sequel to 2016's Bad Moms, Mila Kunis, Kristen Bell, and Kathryn Hahn continue to be on their naughtiest behavior, but things get more complicated when each of their mothers pays a visit for the holidays: Christine Baranski, Cheryl Hines, and Susan Sarandon. The result is full-on holiday hijinks as mothers and daughters are forced to work out their issues.

2. The Chronicles of Narnia: The Lion, the Witch and the Wardrobe

One of the most magical Christmas movies around is The Chronicles of Narnia: The Lion, the Witch and the Wardrobe. Almost entirely set in the dazzling, snow-covered landscape of Narnia, four children are aided by none other than Father Christmas in stopped the villainous White Witch from overtaking the land.

Most office Christmas parties end up being more awkward than super enjoyable, but what if your office went absolutely all-out for their holiday party just once? Office Christmas Party shows the work-related function to end all work-related functions, as a tech company's Christmas party goes completely off the rails. The movie is also filled with some of the most hilarious actors, including Jason Bateman, Jennifer Aniston, T. J. Miller, Kate McKinnon, Vanessa Bayer, and Rob Corddry.

If you are looking for something more dramatic and romantic for the holidays, Showtime is also streaming the 2015 dramedy Christmas Eve. The film centers on six different individuals who each find themselves trapped in elevators on the night before Christmas. And you can't go wrong when the star of the movie is Sir Patrick Stewart himself.

It might not be a Christmas movie per se, but Snow Dogs is definitely a perfect watch for the holiday season. The 2002 adventure comedy centers on a Miami-based dentist named Ted Brooks (played by Cuba Gooding Jr.) who is shocked to learn that he has inherited a team of dog-sledding huskies after his biological mother dies in a small Alaskan town. He travels up to the frozen tundra and eventually learns to train the huskies and compete in a competitive dog-sledding race.

All of these Christmas movies will air throughout this month on Showtime, or you can watch them on Showtime's website.

More like this
10 Rainy Day Movies To Watch On Netflix That Are Perfect To Pass The Time
By Kristen Perrone and Lexi Williams
'He's All That': Premiere Date, Cast, Trailer, Filming News, & More
By Dylan Kickham
Here's How To Watch 'Promising Young Woman' For Free If You're A College Student
By Ani Bundel
Stay up to date