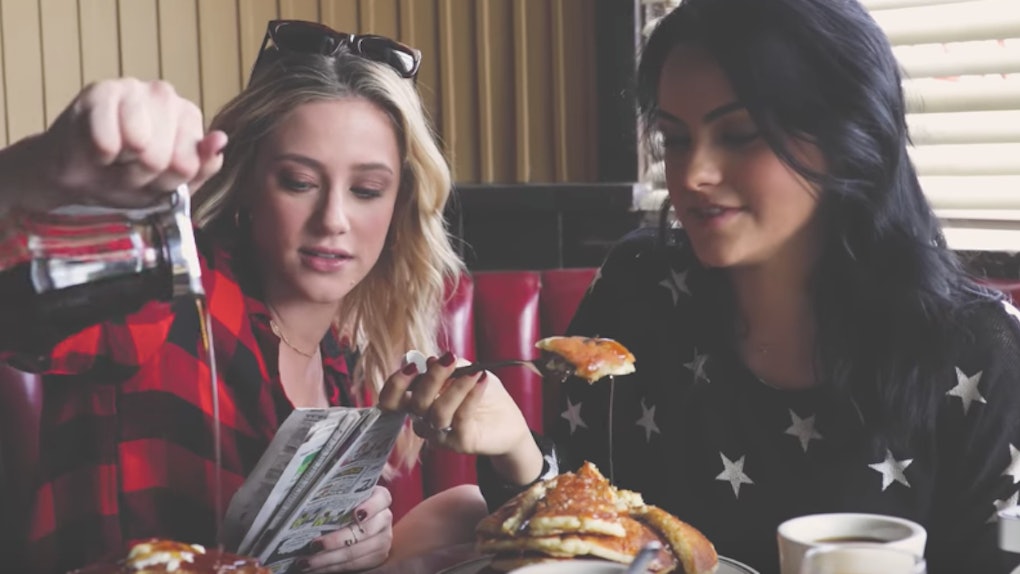 Riverdale characters Betty Cooper, played by Lili Reinhart, and Veronica Lodge, played by Camila Mendes, sure go well together. In my opinion, their blossoming best friendship rivals iconic ones of past hit television shows — like Blair and Serena from Gossip Girl, along with Lorelai and Sooki from Gilmore Girls. Basically, this power duo is majorly cool and majorly close, and even though they're not sisters by blood, they sure have a very special relationship. There are some notorious Betty and Veronica moments from Riverdale that all sisters who are BFFs can relate to.

Like Veronica and Betty, sister BFFs have a special type of bond. In any given moment, they can be (and have been) both mortal enemies and the closest friends you can possibly imagine. They know each other better than they know themselves — down to every strength and every weakness. They can't hide anything from one another, as much as they may try, and it takes something really huge to keep them fighting for more than a day.

Does this sound like you and your sister? Yeah, it looks like the two of you are probably closer than you even know. Chances are, your relationship has a ton of eerily similar moments to a friendship like Betty and Veronica's. Throughout the show, the two go through a lot (well, the whole town kind of does, TBH). These five moments are things every sister duo will say "same" to.

1. When Veronica Made Sure Everyone Knew She And Betty Were A Team

This is a moment from the very first episode — aka, when I could finally trust that Veronica was going to be an actual legitimate friend to Betty. The girls auditioned to be River Vixens, and Cheryl wanted to cut Betty from the team, but keep Veronica. Veronica wouldn't accept that, though, and challenged top cheerleader Cheryl right then and there. "Betty and I come as a matching set," she told her. "You want one, you take us both," she continued. At that very moment, I felt empowered AF. If that isn't my sister and myself, I don't know what is.

2. When They Worked Through Their Issues

From the first time they met each other, it was hard to tell whether Betty and Veronica were meant to be enemies or BFFs. It's something they struggled with a bit (Veronica, the mean girl gone good, and Betty, the good girl with a bad streak). It took time for them to work it out, but they did.

Betty even thought Veronica would dump their friendship, but Ronnie surprised Betty by sticking it out. Though us gals who are fortunate enough to have sisters know we're stuck with them no matter what, we also know we wouldn't have it any other way.

3. When They Took Down Chuck Together

We can't, of course, forget one of the most epic moments Betty and Veronica had in season one — aka, when they went "full dark, no stars" to take down Chuck. This is a total boss moment to admire. All sister BFF duos have their shining moment, but even those of us without sisters I'm sure had a girl power moment during this scene.

4. When They Didn't Mind Sharing The Same Date

Betty and Veronica had just met, but they already had each other's backs. Veronica knew Betty wanted to go to the dance with Archie, and Betty knew Veronica would have no one else to go with.

To all of my ladies who have sisters, you know you've been there. Whether you're fighting over the same crush or dealing with hardcore FOMO because your sister has a boyfriend, you've dealt with it, and come out on top.

5. When They Didn't Let Boys Break Them Up

At the end of season one, we found out that Betty and Veronica aren't letting the whole Archie thing come between them. Veronica asks Betty, "Now that it's just us girls and at the risk of failing the Bechdel Test, are you legit cool with Archie and me?" And, of course, Betty was, because #Bughead over Archie, anyway. BFFs over boys, am I right, ladies?