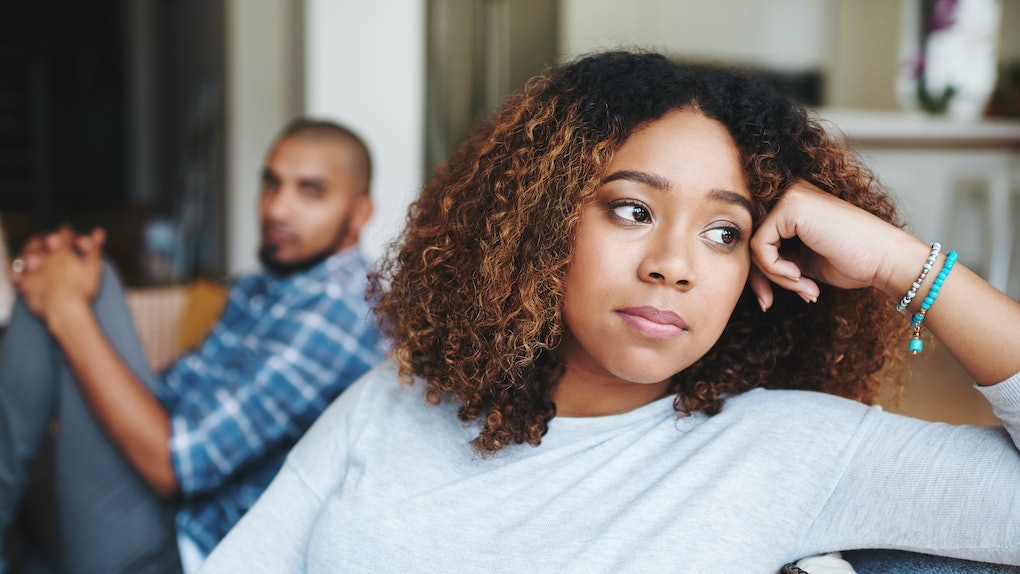 For the astrologically uninitiated, Mercury retrograde is no more than an illusion with no real scientific backing; a phenomenon that doesn't actually wreck havoc three to four times a year. Technically, the uninitiated are right. Nevertheless, there's got to be a reason why everything that could go wrong during Mercury retrograde does, and given that it's the planet responsible for communication, well... it makes sense. While all the zodiac signs will probably feel the impact of this shift, some can be more powerfully affected, so it follows that some zodiac signs will blame relationship problems on Mercury retrograde, when really, those issues might run a little deeper than just the shifting of the planets. No shade.

Communication is the cornerstone of any healthy relationship, so when you and your partner struggle to express yourselves for whatever reason, some tension is to be expected. Some zodiac signs have the patience and flexibility to weather the retrograde storms, while others really struggle to get through this period of time. This is especially frustrating without context, so learning how Mercury retrograde can affect your relationship might help you anticipate potential issues and diagnose what's going on. That said, these zodiac signs are the ones most likely to blame it on the stars.

One of Taurus’ greatest strengths in a relationship is their patience. This sign brims with empathy, so they're able to weather most relationship struggles with a level head and an open heart. However, something shifts in this normally persistent and placid sign when Mercury is retrograde. They feel off-kilter and frustrated, and that makes them more irritable and impatient with their partners. As a result, they find themselves fighting about things that would never normally phase them and aren't even sure why they're upset themselves. It's like everything they’ve bottled up has risen to the surface and is being purged. For people partnered with this steadfast sign, this sudden change can cause serious issues around trust.

Ruled by the moon, this water sign is already highly emotional. It's what makes Cancer so loving, but also, so vulnerable. Getting a Cancer to open up is a challenge, but trying to earn your way into their heart while Mercury is retrograde is a next-level struggle. That's because Cancer often feels like everything around them is out of control, and their emotions are even more heightened during retrograde. Their response is to retreat further into their shell. This sign is also well-known for being on the moody side in the best of circumstances, which can make having peaceful relationship during retrograde a real struggle.

Virgos usually really know themselves. As a result, their partners have a good idea of what they can expect from their Virgo love. However, when Virgo’s ruling planet turns retrograde, the world tilts for them. Their deft communication ability can abandon them, and their keen observation skills betray them, too. With this level of uncertainty, Virgo goes into defense mode, which means they become even more critical, trying to force structure where there is none. This makes Virgo both harder on themselves and on the people around them during these periods of time. Needless to say, their partners bear the brunt of this. As you can imagine, this can create a very tumultuous dynamic within the relationship until Mercury gets its act together again.

Pisceans rely on their powerful gift of intuition to help maintain a strong connection with the people in their lives, particularly in their romantic relationships. Mercury retrograde can often throw off their emotional equilibrium. They feel as though their gut instincts are compromised and they begin questioning everything they would normally feel confident in. This includes the trust they have in their relationship and their partner. During Mercury retrograde Pisces may be tempted to test the relationship and their connection by picking small fights, which can potentially undermine trust moving forward.

If all of this makes you think, "Wow, Mercury retrograde's a real downer," you're not wrong. This shift can heighten emotions, dull the senses, and make people act out of character — all things that can spell trouble for relationships. But here’s the good news: It passes, and before you know it, you’re back to your old self. Now you’ll know what to pay attention to moving forward, so Mercury can’t put your romance in retrograde ever again.

More like this
3 Zodiac Signs Most Compatible With Kourtney Kardashian & Travis Barker
By Caroline Colvin
Each Zodiac Sign Gets Bored In Relationships For A Different Reason, Here's Yours
By Rachel Shatto
7 Reasons A Libra & A Pisces Make The Ultimate Power Couple
By Courtney Dercqu
Stay up to date