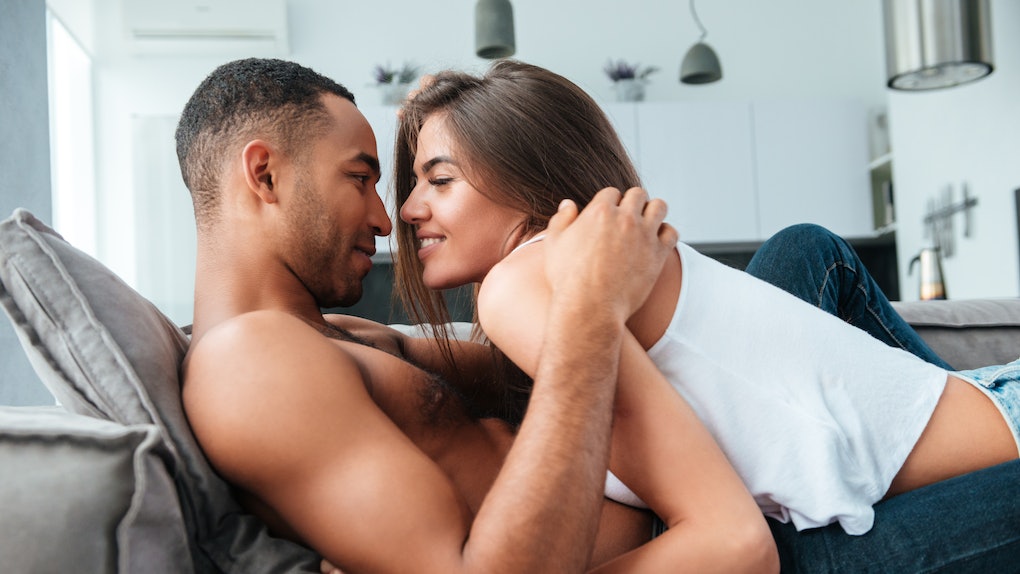 4 Myers-Briggs Personality Types Who Have The Best Sex, You Lucky Minxes

What makes a person good in bed? Some may say that the best bang buddies have infinite amounts of energy. Others may argue that real sexperts are always down to try new things. Your personality can say a lot about your success in the sack, especially if you're one of the Myers-Briggs personality types who have the best sex. Just as there are personalities charmed when it comes to falling love, certain types are well-suited for seriously satisfying sex, and if you're one of them, then I see lots of orgasms in your future, you lucky dog.

I'm an ISTJ, otherwise known as the Logician. While I'm known as a sensual and committed lover (if I do say so myself), Logicians don't tend to have a reputation for making your bed rock, and though I'd like to think I do just fine, I'm apparently not as gifted in the sheets as other personalities. Not sure what your personality type is? Take the test to find out. Of course, your Myer-Briggs personality type doesn't necessarily guarantee your sexual prowess (or lack thereof), but it might benefit your game to know if you are one of these sexually-gifted personalities. If you are, then go get 'em, tiger.

While Executives tend to appreciate order and tradition, that doesn't necessarily mean that missionary is their go-to position. ESTJs are direct and honest, which means that they aren't afraid to say exactly what they need in order to feel satisfied. If they want to be touched there, you better believe they're going to tell you.

Even though they like consistency, people with this personality type never fail to bring vigor and intentionality into the bedroom. ESTJs are not about touchy-feely stuff and proclamations of love — they're about getting what they want, and if what they want is good sex, they'll make it happen (with consent from their partner, of course). As well as having sex fairly frequently, Executives are known for achieving sexual satisfaction above most others.

The name alone should tell you everything you need to know about this personality type. As natural-born leaders, Commanders aren't shy when it comes to taking the lead in the no-pants dance. ENTJs may be efficient, but sex for them isn't necessarily about getting in and out as quickly as possible. With their energy and ability to invigorate others, they'll keep at it as long as possible until both parties accomplish their goals (that goal, in this case, being the big O).

People with this personality type are also known for being sexually daring and willing to try almost anything once. With their enthusiasm for adventure, ENTJs rarely settle for ho-hum sex. Fun fact: 50 Shades of Grey author E.L. James imagined Christian Grey to have an ENTJ personality, which is pretty darn telling.

Virtuosos love to explore, and they certainly take that fervor for exploration into bed with them. ISTPs are naturally curious, so they're all for new tactile experiences, including those of a sexual nature. Though Virtuosos can be cold and detached — they tend to dislike commitment and get easily bored — those with this personality type know how to commit to the moment. With their passion, spontaneity, and energy, ISTPs can make any sexual encounter more satisfying.

This personality type lives for sensory and sensual pleasure. If they get a chance to try something new and exciting, they're going to take it. Want to try and new toy or a new position? Virtuosos are probably into it. As long as you can hold their attention, ISTPs are totally present and down to try bold moves.

Like Commanders, Entrepreneurs are anything but shy. Though they're rational and heedful, ESTPs have an appetite for adventure, and their buoyant personalities will convince anyone to go along for the ride. People with this personality type are both bold and direct, and while this may lead to them getting impatient with their partner, these traits also result in unpredictability and new thrills.

Entrepreneurs are known for showing initiative and resourcefulness, so instead of just trying challenging sex positions, they're just as likely to invent their own. ESTPs know what they like, and just like Executives, they won't hesitate to express their desires. You can never keep an Entrepreneur idle for long — they always crave exciting new experiences, both outside the bedroom and in it.