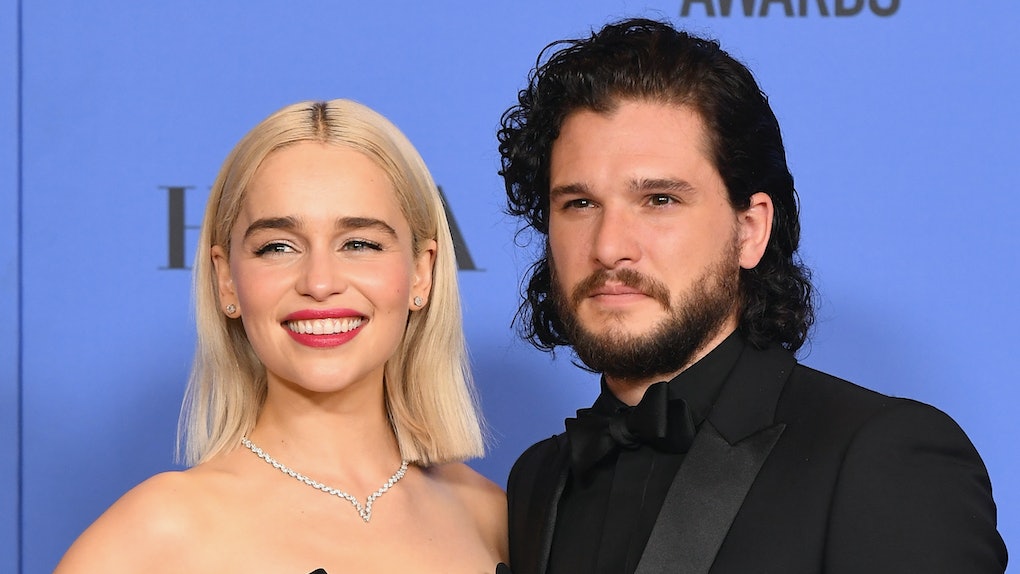 4 ‘Game Of Thrones’ Dating Rumors That Are Almost Believable

The series finale of Game of Thrones is fast approaching. It's the end of an era, and an epic story that has meant a lot to millions of people. (Perhaps too much, in my case, if I'm honest.) And while we may finally see who ends up in the iron throne, we might never know for sure what may or may not have happened between the stars of the beloved series... romantically. Because stars are just like us, there have been quite a few Game of Thrones dating rumors that've made headlines over the years that have remained just as much a mystery as the plot points in Game of Thrones. Forget The Prince Who Was Promised, what I really want to know is who dated and/or hooked up with whom! Because you can't put this many hot people together, on remote filming locations, and not get a little cozy, right? Right?! (I mean, maybe not, but let me live this fantasy.)

As it turns out, there have been a few reported romances among the cast members — and maybe even some intense ex-drama that has reached George R. R. Martin levels of intrigue. While none of this gossip has been fully confirmed by any of the involved parties (I mean, that's what makes them rumors, right?), there is enough circumstantial evidence to make them pretty compelling. Here are four of the rumors that are, honestly, almost believable.

Did you think it was strange that Qyburn delivered the crossbow meant to kill the Lannister brothers to Bronn on Cersei’s behalf? And now that you think of it, have you ever seen Cersei and Bronn in the same place at the same time? The answer is no you haven’t, and the rumored reason you never saw Lena Headey and Jerome Flynn in the same scene is due to their reportedly rocky history together. In 2014, The Telegraph reported that the reason these two never film together had to do with their reported past relationship. A source reportedly told the publication that although they reportedly dated back in the early ’00s, they are reportedly no longer on speaking terms. “Jerome and Lena aren’t on speaking terms any more,” the source reportedly said. “And they are never in the same room at the same time. It’s a pity because they appeared to have patched things up for a while, but now the word is they should be kept apart at all costs.” Elite Daily reached out to Headey and Flynn's teams for comment, but did not hear back by the time of publication.

Flynn wasn’t the only co-star Headey was rumored to have had a romantic connection with. In 2014, following her divorce from Peter Loughran, there were reports that she'd struck up a romance with Pedro Pascal, aka Oberyn Martell. The rumors started circulating when the two were seen out spending time together. Neither party confirmed the romance. However, when Headey announced that she was pregnant with her second child the following year, there was speculation that Pascal was the father. Headey has since revealed that the father of her daughter Teddy is her now-husband Dan Cadan. Elite Daily reached out to Headey and Pascal's teams comment, but did not hear back by the time of publication.

In a case of life imitating art, Dean-Charles Chapman and Nell Tiger Free, the actors who played Lannister siblings Tommen and Myrcella Baratheon, reportedly had an on-set romance as well, TV Guide reports. While neither party has confirmed the relationship, their social media channels (featuring photos of them spending a lot of quality time together along with plenty of heart emojis) sure made it look like romance back in 2015. Elite Daily reached out to Chapman and Free's teams for comment, but did not hear back by the time of publication.

Have you always secretly hoped that Emilia Clarke and Kit Harington would, ahem... sing the song of ice and fire IRL? Well, there are rumors that it maybe almost happened before things got really serious between Harington and his now-wife Rose Leslie. Harington described their meeting to Elle in 2010, saying: “I remember vividly the first time I met Emilia, which was in the hotel bar in Belfast, before season one. I was sort of bowled over by this absolutely stunning, petite girl with this wicked sense of humor. We became very fast friends quite quickly."

In 2012, Harington reporedly began dating Leslie, but they reportedly broke up briefly in 2014, which is when rumors of a potential romance between Harington and Clarke began to resurface. The Daily Mail reported that Harington was pursuing Clark and reportedly “vying for her affections.” At the same time, Star Magazine claimed, “Emilia has been telling friends they would make a cute couple,” adding that she was reportedly "completely enamored by Kit. You can see that those two are on a collision course with romance.” However, this evidently wasn’t meant to be — if it truly happened at all — because, by August 2015, Harington and Leslie were back on, and were married in June 2018. Elite Daily reached out to Harington and Clarke's teams for comment, but did not hear back by the time of publication.

While we will never know for sure how much, if any, truth there is to all of these rumors, at least they give us plenty to think about as we head into the long night of a post-Game of Thrones world.