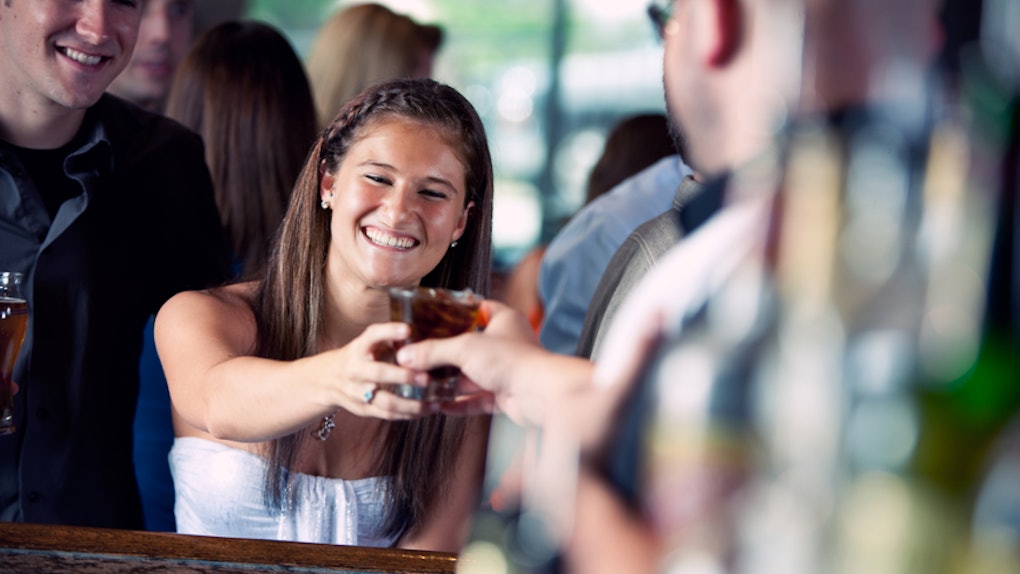 2018 is the year that you tap into your inner flirt. If you're hoping to start making more meaningful connections that could lead to a relationship next year, then it's time to up your flirting game. And deciding on a couple of new flirting tips to try the next time someone catches your eye is a great way to build up your flirting confidence. Waiting for others to approach you might seem like the better option, but think about all of the awesome dates you could be missing out on by not challenging yourself to make the first move.

Like anything else, for most people, flirting is something that takes a bit of practice to perfect. Some people can dish out the come-hither look for hours, but when it comes to uttering an actual word, they freeze. Others can start an interesting conversation with just about anyone, but the thought of bolder techniques, like grazing a knee or touching a shoulder, makes them light-headed. But in 2018, it's time to challenge yourself to find a surefire flirting method that'll up your game, even if it is a little scary at first. Here are some tips for people of all flirt-levels to hopefully ring in 2018 with a fire dating game and, eventually, a relationship.

The key to getting that hottie to come on over to chat you up can basically be broken down into two steps: First off, you're definitely going to want to flash those pearly whites, as smiles go a long way. Then, you'll want to let your eyes linger on theirs for a couple of seconds. Yes, holding eye contact with sexy strangers can be totally nerve-racking, but the the payoff (i.e. a chance to talk to them and work your magic) is usually worth a few seconds of inner turmoil.

2. Ask Them Questions About Themselves

If giving someone the eyes feels a bit too intense for you, then another way to flirt with a potential bae is to show interest in them by striking up a conversation. Initiating a conversation with someone you've been gushing over in a corner for, like, half an hour may feel daunting, but the thing is, the conversation doesn't have to be overly flirtatious.

In my opinion, it's actually better if it's pretty casual and totally normal. That way, you won't come on too strong and you'll have some time to build up a rapport with them. Plus, people love talking about themselves or what they like, so asking innocent-sounding questions, like their favorite restaurant recommendations in the area or cool bars they like to go to, is always a good bet. If the convo keeps going well, by the end of it, you may even be able to suggest hitting up one of those places together later that night. If they're smart, then they'll be more than happy to show you the cool place down the street.

3. Wear What Makes You Feel Most Confident

So often, we hear that it's crucial to dress a certain way to get attention from people you're interested in. But the truth is, there is no "right" or "necessary" way to dress or present yourself when you're trying to get your flirt on. What is necessary, however, is that you feel confident and sexy in whatever you choose to wear. Confidence is so easy to pick up on, and depending on the person you're flirting with, oozing confidence may mean you won't even have to make the first move.

4. Get Touchy (Within Reason)

This tip obviously doesn't mean going all-in with physical contact on someone you just met. It definitely requires your perception skills to be on point, because jumping the gun and lightly touching someone who isn't into you could end up being totally awkward.

When you've been talking to someone for a while, though, and you can sense the time is right, these "touches" should be very light and subtle — things like grazing their knee when they say something funny or softly touching their shoulder when asking them to repeat something they said.

Flirting can definitely be scary, but it can also be a really fun way to make dating more exciting for you. Just remember that, if things don't turn out the way you want them to, the best part is that you literally never have to see them again.

Putting yourself out there isn't always easy, but it is a step in the right direction for single baes who are open to meeting someone and potentially starting a relationship in 2018.