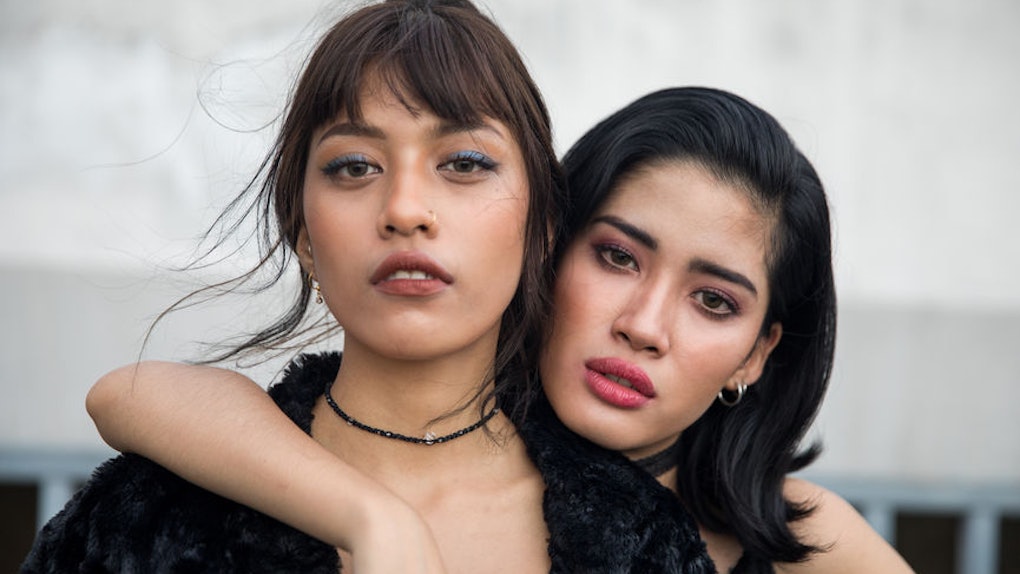 Imagine this: You've been casually seeing someone for an extended period of time, going on dates or at least "hanging out" and having sex. You get the warm fuzzies when you think about them, and you have reason to believe that they like you too, but you haven't put a label on this "thing" you've got going on. If you want to, but you're not sure if they feel the same way, there are certain behaviors that mean someone’s not ready to define the relationship (DTR) you might be able to pick up on.

Relationship coach Miku, who runs relationship coaching company Love Notes by M, says there could be a couple of reasons why someone might not want to DTR. Turns out, it's less about the duration of your situationship and more about the depth. "It could be that they don't believe they know you well enough. Some individuals take longer to assess and feel comfortable DTR-ing," Miku tells Elite Daily. "It's extremely common that two people are not on the exact same page,"

And sometimes, especially if it's early on, that's OK! What may not be OK is when you've done what feels like a lot of getting to know each other, and your relationship still isn't where you want it to be. Here are five signs that the other person might not be ready to define the relationship, why that may be, and what you can do to address it.

1. They Steer Clear Of Conversations About The Future.

If your partner doesn't want to DTR, they might regularly change the subject when you hint at wanting to discuss labels, "or when the conversation steers in that direction," Miku says.

Nadia-Elysse Harris, founder of Ohnaahnaah, a sexuality education resource for black women and femmes, adds, "If they avoid conversations about your feelings or the future, those are also red flags." So, does potential-bae whip out their phone when the conversation gets deeper than sex, the weather, or your favorite TV show? If so, take note.

2. In Fact, They Don't Talk About The Future At All.

Another red flag, Miku notes, is when "they avoid making plans too far into the future with you." This can look like them holding off on buying concert tickets for that big music festival you're both lit about, or insisting you not worry about them when you're planning your winter or spring breaks. Harris echoes Miku, saying that "inconsistency, avoidance, [and] no talk of the future" are all behaviors to keep an eye on.

3. They're Not Trying To Introduce You As Anything More Than A Friend, If At All.

"When you do meet their friends or coworkers, they introduce you by your name only," Miku says. "Or worse: 'This is my friend.'" Yeah, you wanted to go to happy hour with the crew, but you probably weren't expecting to become a part of the crew. Or maybe you didn't hear about the happy hour at all and had to find out from watching your supposed-boo's Instagram Story in bed. Why? Because if you haven't had a conversation about what you're doing, then there's no agreed-upon way to explain that you two have been cuddling, ordering food, and hooking up for months with no direction.

As Miku explains, "They avoid taking you to functions with family, friends, or coworkers, where you'll likely be asked what your relation is to one another."

And finally, Miku says, another sign they might not be ready to DTR is that "they hardly use the pronoun 'we' when talking about the future." A "we" will slip out naturally when they're discussing their dream vacations, grad school plans, and other aspects of their future if they see you as a part of it.

Harris echoes this, saying, "People who want to be with you will clearly communicate that through their words and actions."

At the end of the day, even if they have gotten to know you well enough and you think you make a good match, you both might just want different things. "For whatever reason, they do not see a long-term future with the relationship," Miku says. "Tough truth, but one that is important to hear."

On the other hand, Harris says, maybe they're hesitant to DTR because their definition of a "relationship" probably won't be the same as yours. "Defining the relationship is so complex in 2019, because we have finally assigned words to what many would consider 'unconventional' relationships," Harris says. For example, they may know for a fact that you want exclusivity, but maybe they just want to hook up. Or perhaps they want to be exclusively monogamous, and you want to be with someone who's open to polyamory.

Here's How To Address It.

Whatever the case may be, ultimately there's something standing in the way of the other person committing. And even though it can be any number of things, you won't know until you just talk to them about it. Even if you sense that they don't want to define things, have the conversation for your own peace of mind. "There is nothing worse than being in a weird grey area with someone," Harris says.

Both Harris and Miku emphasize that it's important to honor your feelings, not table them. You deserve to have answers and clarity if you're not comfortable with the undefined place you and the other person are in. The key to bringing this up is to frame it as an expression of your feelings, without any particular expectations.

"Communicate your feelings and explain why it is important for you to DTR," Miku advises. Above all else, do not start the conversation with, "We need to talk." Instead, lead with, "'I would like to share something you,'" Miku explains, "because that is exactly what you are doing: Sharing for the purpose of your own clarity and [taking the] next step moving forward."

It's normal to feel scared, because a conversation like this requires vulnerability and the potential for rejection. But just as you have every right to want to DTR, the other person has every right not to. At the end of the day, you won't know where the other person stands until you ask, but no matter how hard and no matter the outcome, you'll probably be glad you had this conversation. Now you know where you stand, and most importantly, now you know how to move forward.