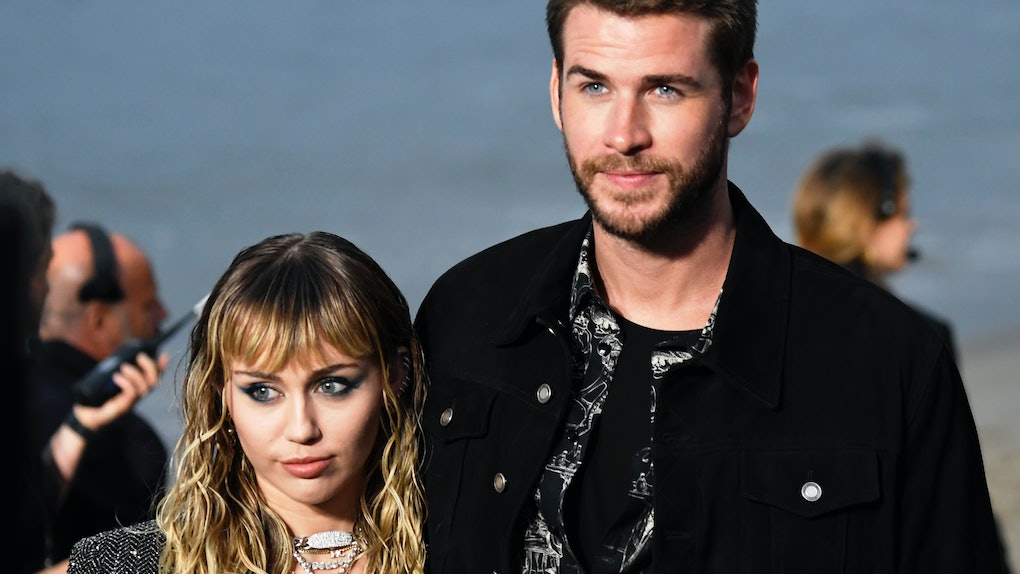 It's been a sad week for fans of Miley Cyrus and Liam Hemsworth after the couple announced their separation on August 10. News broke that the pair, who tied the knot in December 2018, decided to take some time apart, but neither party elaborated on just what went wrong. And although we can't know for sure unless either one of them speaks on it, there may be body language clues about Miley Cyrus Liam Hemsworth’s breakup that could have foreshadowed what was coming.

According to E! News, a representative for Cyrus confirmed the sad news over the weekend. "Liam and Miley have agreed to separate at this time," the statement from the representative said. "Ever evolving, changing as partners and individuals, they have decided this is what's best while they both focus on themselves and careers. They still remain dedicated parents to all of their animals they share while lovingly taking this time apart. Please respect their process and privacy."

Even though it's impossible to pinpoint the exact reason why Cyrus and Hemsworth are taking time apart, there's a lot we might be able to tell by looking at their body language. Body language can reveal tons about a couple's dynamic, from the way their feet are positioned to where they place their hands. I asked two experts to take a look at physical dynamic between Cyrus and Hemsworth before their split, and based on what they had to say, the breakup was almost inevitable.

1.There was some tension in April.

Cyrus and Hemsworth attended the premiere of Avengers: Endgame at the Los Angeles Convention Center on April 22, 2019, and while they both looked fabulous, body language experts agree they didn't appear too happy together.

"They're not holding each other close," body language expert Traci Brown tells Elite Daily. "He's got that non-emotional face, and she's almost trying to smile but isn't pulling it off." Additionally, Hemsworth has "his shoulders angled toward her, but she's not angled toward him, rather, focusing on the camera. And she looks pretty stiff with her arm so there's quite a bit of tension here."

Brown isn't alone in her analysis of the tension in this photo. "In this photo she is all about her dress, and holding it up, so her body is full of tension," body language expert and author of Snap: Making the Most of First Impressions, Patti Wood, tells Elite Daily. "She is arching her shoulders back and holding her chest high to hold up the dress. Her chin-tremble smile shows her unhappiness and her arched back left elbow shows she's ready to leave the relationship."

So sad! But according to Wood, Hemsworth's body language here hadn't totally given up on the relationship. "He is still standing in a partial 'love-V' with her, with his back foot pointing to her and supporting her," she adds.

When Cyrus and Hemsworth attended the 2019 Met Gala, they didn't exactly look thrilled to be there together. "She looks bored," Brown says. "They're not touching except with their hands on the other's backs, so we're seeing some separation in the relationship here."

Additionally, Wood adds there definitely seems to be an indication things weren't going well here. "The looks on their faces say it all, what should be a fun event leaves them with a partially puckered, sour look on her face and distant, tired gaze and low smile on his," she explains.

3. They showed some promise here.

In this photo, which Hemsworth shared to Instagram on June 2, the two appear to be more laid-back. "We see them a bit playful," Wood says. "He wants to capture her with the funny glasses and selfie pout and say to the world, 'This kooky girl is mine.'"

However, Brown explains that there's more to it than that. "He's looking pretty stressed with his eyebrows pulled down and in," she explains. "And she's doing a pouty face, not the picture of happiness."

4. They are *not* feeling this moment.

The couple attended the Saint Laurent Men's Spring Summer Show on June 6, and the experts agree they seemed ready for a break.

"Neither are smiling, not even a face resting at peace," Brown says. "He's just flatlined and looks like he's barely there, in body or spirit. She's not facing him even slightly with her shoulders, so her energy is elsewhere." That doesn't sound too good, but according Brown, Cyrus is the one who really looks like she isn't happy. "From that facial expression, she looks like she's about to slap someone," Brown adds.

According to Wood, they were both probably ready to part ways at this point. This particular photo "shows wistfulness and a gaze toward the distance by him," she says. Wood also says that Cyrus "is sad and conflicted with her head tilted away from him, creating a distance from him."

Cyrus and Hemsworth's split may have come as a shock to fans, but according to the experts, it's not all that surprising. "It's clear from these pics that they weren't built to last," Brown says. "Overall, in these shots, they're just not happy." And as much as fans may want them to stay together, if they weren't happy, then ending things may have been the best move for them. Here's hoping they both find happiness in this new chapter.