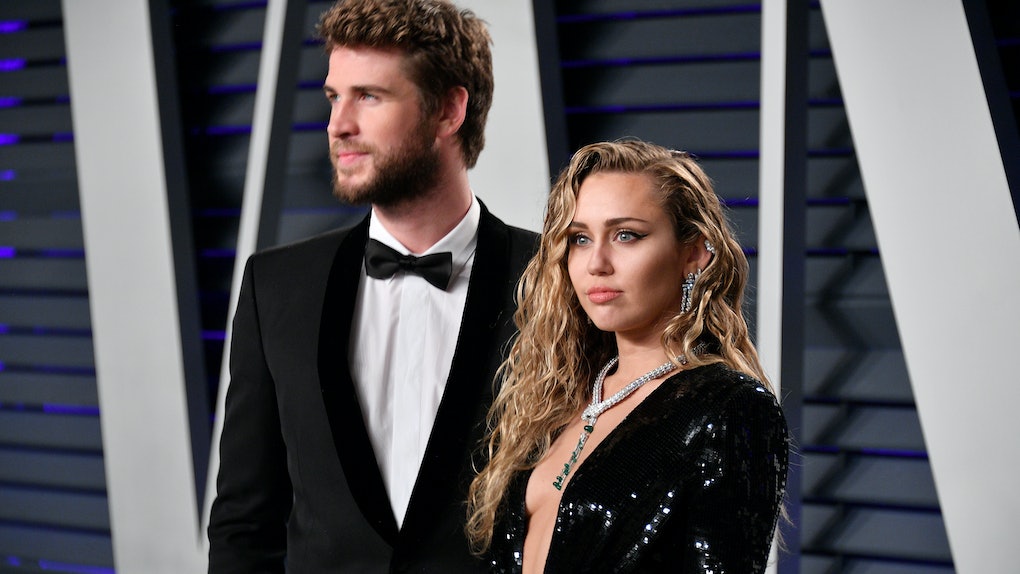 It's a rough time for Miley Cyrus and Liam Hemsworth stans, who are still struggling to come to terms with the fact that the former couple has separated after over a decade together. Now that Cyrus' rep has issued a statement and the pair appear to be already moving on romantically, you might be wondering where things went wrong before they decided to pull the plug on their marriage. According to insiders, the reported reason for Miley Cyrus and Liam Hemsworth's breakup actually isn't that surprising, because the pair weren't reportedly on the same page when things went south.

It's been a whirlwind couple of days for the former couple, who first started fielding breakup rumors after Cyrus was reportedly spotted without her ring while vacationing with Brody Jenner's ex wife, Kaitlynn Carter, in Italy. Just hours before Cyrus and Carter were reportedly spotted kissing and engaging in PDA during their getaway, a rep for the "Mother's Daughter" songstress released a statement on Saturday, Aug. 10 confirming that the Cyrus and Hemsworth had indeed called it quits for the time being.

"Liam and Miley have agreed to separate at this time," the rep said. "Ever evolving, changing as partners and individuals, they have decided this is what's best while they both focus on themselves and careers. They still remain dedicated parents to all of their animals they share while lovingly taking this time apart. Please respect their process and privacy."

While many fans were blindsided by the news of the split, insiders say that Cyrus and Hemsworth's inner circle saw it coming.

"They have been trying to make it work for months now but haven't felt they were connecting on the level they were feeling when they got married last year," a source told E! Online. "It's been a rough year."

It sounds like busy schedules were also to blame, as the actress has been on the road promoting her new music and working on her career.

"She has been ready to put out music and be back in the game touring and performing. They really grew apart," the source continued. "Miley and Liam have still been communicating and it wasn't a messy split but they have decided they are at different points in their lives currently."

Despite the fact that the newlyweds decided to tie the knot just eight months prior, a source told People that those close to the couple saw the breakup coming. "This split isn’t shocking to people who are actually with them every day," the insider told the publication.

The source continued, "After they reunited, everyone thought they were this 'perfect' couple, but they still had a lot of issues. They're not on the same page when it comes to a lot of fundamental things that make a relationship work. It’s not surprising at all."

While the fact that friends and family possibly saw the split coming might not make fans feel better about it all, it does sound like the breakup was amicable and they're focused on moving on and doing what makes them happy for the time being.

More like this
I Tried Singing While Running Like Miley Cyrus & OMG, My Lungs
By Rachel Varina
These Videos Of BTS Messing Up & Recovering Flawlessly Prove They're Master Performers
By Michele Mendez
These Tweets About Prince Philip's Funeral Show What An Impact He Made
By Brandy Robidoux and Cianna Garrison
Stay up to date