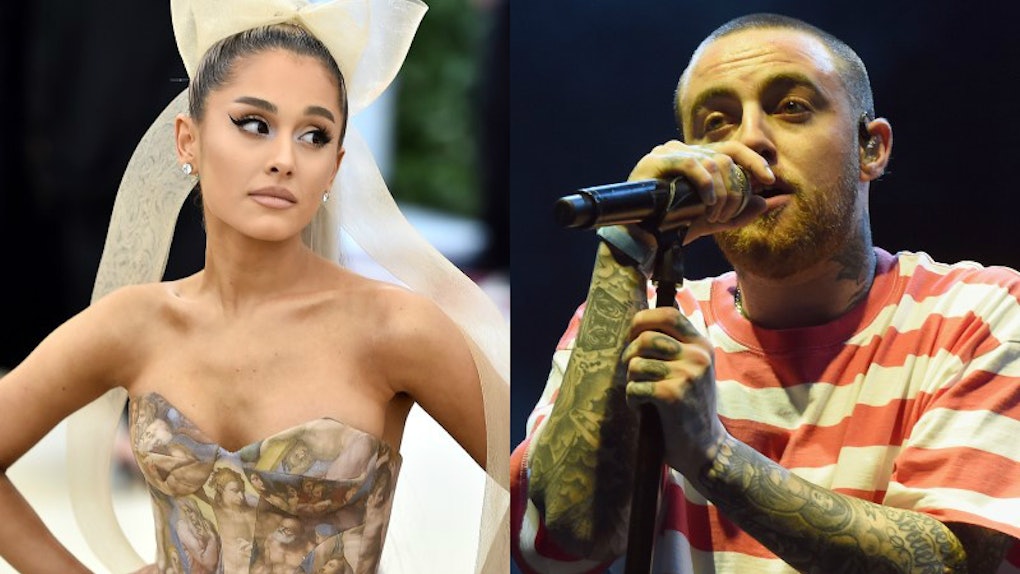 Anyone who listens to Ariana Grande’s music knows that everything she produces is deeply personal. She lays her feelings bare in her music and there’s really never a time when she’s not sharing some deep part of who she is with her fans. And nothing proves that more than Grande’s songs about her ex Mac Miller. After Miller’s death in September 2018, Grande reportedly put her heart and soul into her music. And from that came a really lovely song called “Imagine” that fans believe is about Miller (at least in part). But that’s not the first time Grande has written lyrics about Miller, according to fans. In fact, she’s done it quite a few times. Here’s a look at three Ariana Grande songs about Mac Miller, at least if you ask fans.

As previously mentioned, Grande’s new song “Imagine” is believed to be about Miller. Here’s a look at the lyrics:

Step up the two of us, nobody knows us / Get in the car like, 'Skrrt' / Staying up all night, order me pad thai / Then we gon' sleep 'til noon / Me with no makeup, you in the bathtub / Bubbles and bubbly, ooh / This is a pleasure, feel like we never act this regular

While the lyrics may not immediately conjure images of Miller, one brave fan asked Grande what the song was about. Grande revealed the meaning behind “Imagine” in really simple terms.

That certainly hints that Grande could have had her relationship with Miller in mind when she was recording the track.

Not to mention the fact that Miller had a tattoo on his arm that said “Imagine”:

While “Imagine” is seemingly about Grande imagining a life where she was able to live happily ever after with Miller, the track “Better Off” from her Sweetener album definitely has "love gone wrong" written all over it. Here’s how Grande addresses a relationship in the song:

Go on and face it, I'll never be ready for you (ready for you) / I swear my love is a curse, make you handle issues (handle issues) / Let's put them topics to bed and go f*ck on the roof, just to say that we did it / You keep insisting I listen to your proposition / I dismiss them all, no offense, yeah

Steering clear of any headaches to start / And if we're being honest / I'd rather your body than half of your heart / Or jealous-ridden comments / That come when you let in them feelings that I don't want / I never let 'em know too much / Hate gettin' too emotional, yeah

While there's no way to know for sure if Grande was singing about Mac Miller in "Better Off," when it dropped, fans speculated that she was. The lyrics could possibly be read as an extension of what Grande revealed about her troubled relationship with Miller back in May 2018 after the two had broken up:

Elite Daily reached out to Grande's team for confirmation that "Better Off" was about Miller, but did not hear back by the time of publication.

Another track featured on Sweetener is “Everytime”, a song that details the push and pull of a troubled romance. According to fans, Grande appears to be referencing her ill-fated relationship with Miller in the lyrics. Here's a look at the lyrics:

And the chorus truly seems to allude to the issues Ariana referenced in her tweet about their breakup:

Elite Daily reached out to Grande's team for confirmation that "Everytime" was about Miller, but did not hear back by the time of publication.

Whether "Better Off" and "Everytime" were about Miller or not, it doesn't change the fact that Grande loved him fiercely, and still does. Relationships are complicated whether there's a lot of love in them or not, and it's clear from Grande's tweets about what led to their breakup that her relationship with Miller was no exception.

Although Grande and Miller clearly had no shortage of troubles, they also had no shortage of love while they were together, and that can be seen throughout Grande's tributes to Miller since his death. Grande gave the rapper the ultimate shoutout in her hit single, "Thank U, Next," after his death when she sang,

Wish I could say, "Thank you" to Malcolm / 'Cause he was an angel

Clearly, Grande cherished Miller as a person through good times and rough times, and if all of these songs are about Miller like fans speculate, then it's commendable that she was authentic about the good and the rough times in her lyrics. They really capture how deep her relationship with Miller was and there’s no doubt that this particular relationship had a huge impact on her, both personally and creatively.