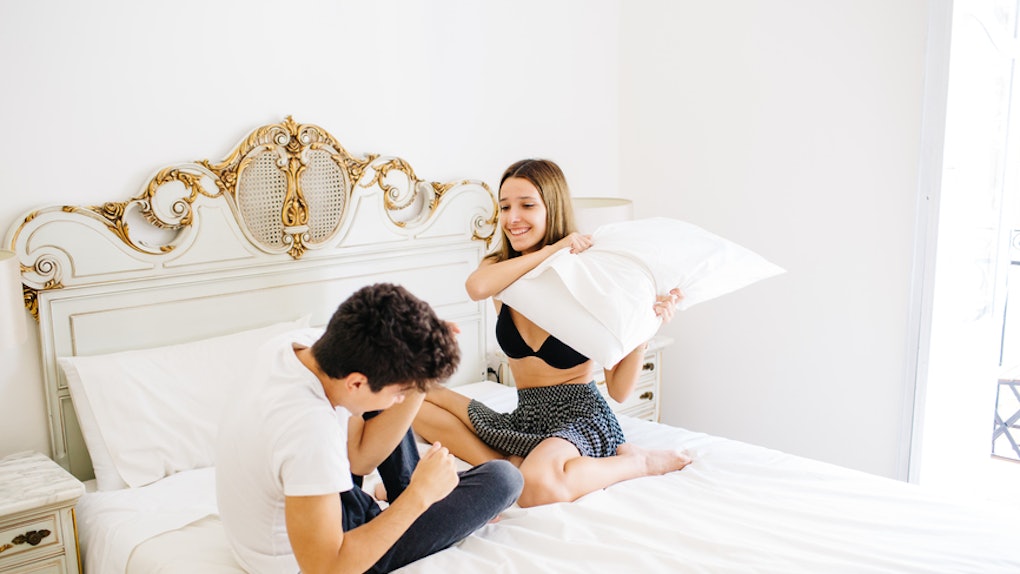 Growing up, I feel like the adults in my life reminded me that happy friendships, couples, and families all fought. Which, in retrospect, is an odd lesson to drill into children's minds. But it's totally true: All relationships can, and should, involve the occasional hiccup — otherwise it probably means that one of you is a cyborg, and no one wants that. Assuming you and your partner are not, in fact, cyborgs, you've probably gotten into one (or all) of the most common fights couples have.

If you're guessing that they revolve around issues with your finances, daily responsibilities, and sex lives, ding ding ding! You are correct. I feel like the fights my friends and I most frequently vent to one another about (generally over brunch cocktails, à la the women of Sex and the City) often revolved around those subjects, too. So, definitely don't worry if you two bicker about who should be paying for those concert tickets this summer, which family to spend the holidays with, and whether you two are adventurous enough in the boudoir (BTW, if you're hoping to spice that up, just give some of these sex moves a try!). It's only once you two start having that same argument over and over again that you should get a bit concerned, according to licensed psychotherapist, Denise Limongello, LMSW.

"Couples should, in fact, worry if they’re having the same fights over and over, again," says Limongello. "Redundant fights are a key indicator of underlying issues and dis-satisfaction within the relationship. If you find yourself consistently bickering with your partner over petty issues, you may want to examine whether or not the two of you are on the same page on more important issues of the life you’re building together."

If you two aren't bickering on the daily, though, there's no need to fuss about getting into one of these totally routine arguments. Here are the three most common fights that couples get into. So yes, you guys are totally normal! And no, you're not alone.

According to a recent survey from financial planning company LearnVest, 68 percent of Americans in relationships say that finances are a greater a source of tension with their partner than their sex life. Which I totally understand.

My ex-boyfriend once "took me out" to a nice fondue place, and when I offered to pay the tip on our bill, his response was, "When the bill looks like this, you bet you're paying the tip." I low-key considered fashioning my fondue stick into a shank (JK, JK! But I was not happy).

If your S.O. makes remarks like that every once in awhile, it's understandable. Everyone bickers about who should pay for this Uber or that round of drinks. But if you repeatedly can't find a solution that works for both of you, it may be time to rethink the relationship.

"Couples most often fight about elements that [were] never fully discussed or negotiated at the beginning of the relationship," explains Limongello. "Many couples are unresolved about critical issues such as money, daily responsibilities, and expectations."

Money we've already covered, but daily responsibilities are something couples rarely discuss at the start of a relationship — and they can build up frustration pretty quickly. Especially once you two start passing large chunks of time at one another's homes (just because it's your apartment doesn't mean you should always be responsible for the dishes, you know?).

As Limongello explains, petty fights around who should load the dishwasher or unclog the shower drain are sometimes connected to larger issues. "Thus, 'You better take out the trash' could really carry a much stronger underlying meaning," she says.

But if you're really just frustrated that your S.O. doesn't pull his or her weight when it comes to chores — just tell them, girl!

As sex therapist Vanessa Marin told Bustle, sex is another one of the top issues that couples fight about. Because everyone's got different sexual expectations and drive, and that sometimes leads to a disconnect.

"Studies also show that couples also struggle with fights pertaining to sex and to the social life of the couple," says Limongello, which might boil down to frustrations around feeling like your partner is lazy or not quite adventurous enough from time to time.

If your partner is completely ignoring your enjoyment and pleasure (or vice-versa), it's a definite issue. But don't fret if you get into the occasional snafu around your sex lives — just strive to keep an open dialogue around your desires and expectations in the boudoir, and you're good.