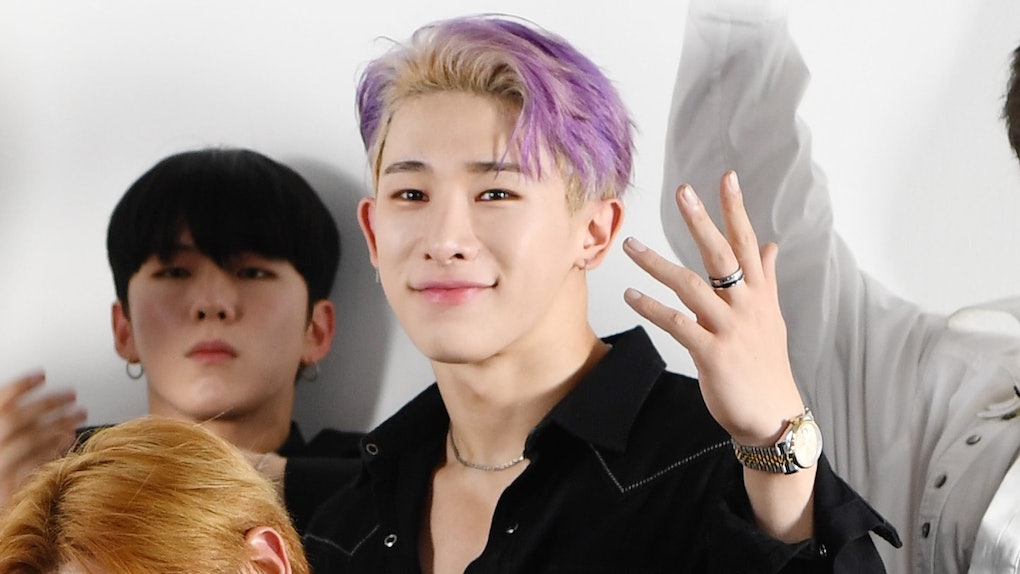 Fandoms have good and bad days. Unfortunately for Monbebes, Oct. 31 was the latter. It was the day Starship Entertainment announced Wonho's departure from Monsta X after a series of rumors and scandals surrounding the member compelled him to leave the band. The news came as a big shock to fans, and Monbebes immediately launched Twitter campaigns in hopes Wonho would return to the band. Whether that happens or not is up in the air, however, since Wonho's contract with Starship has been terminated. For now, Monbebes can appreciate Wonho's best moments that made fans fall in love with him and Monsta X in the first place.

Wonho's kindness, selfless personality, and priceless sense of humor shine through whenever he interacts with his fellow members or his fans, and so many of those moments were, thankfully, caught on camera.

In Wonho's letter announcing his departure from Monsta X, he asked fans to support the band even if he wasn't a member anymore, so he probably wouldn't want Monbebes to feel sad about his departure for too long. Instead, fans can celebrate his time with Monsta X and all the moments he made them truly happy.

1. When His Love For Monbebes Was So Strong He Ripped His Jacket

Remember that one time at a fan sign he tried to make a hand heart for fans and accidentally ripped his jacket? If that's not a sign of how much Wonho loves his fans, I don't know what is.

2. When Wonho Blew Everyone Away With His Drawing Skills

Besides being an impressive vocalist and dancer, Wonho is also a pro at drawing. During an interview on TRL, Wonho wowed the host by drawing Monsta X's Jooheon within a matter of seconds.

3. When Wonho Freestyled and It Was Actually Good

With a bit of training, Wonho could totally make it as a rapper if he wanted to.

4. When Wonho Gained The Courage to Face His Fears

Facing your fears is always daunting, which was definitely the case when Wonho went bungee jumping on the variety show Right Now. Wonho's nerves were at an all-time high, but he eventually gained the courage to jump by thinking about his fellow Monsta X members. (You can watch Wonho make the huge leap near the 36:50 mark above.)

5. When Wonho Laughed So Hard He Knocked Over The Set

What's even better than Wonho's gorgeous smile? His I'm-laughing-so-hard-I-can't-breathe laughter (the best kind of laughter, TBH). Wonho laughs so hard, in fact, that he sometimes accidentally knocks over anything in his vicinity, which makes the moment that much more hilarious.

6. When Wonho's Aegyo Made Monbebes Swoon

Aegyo, a Korean term for a cute display of affection, is synonymous with Wonho because, whenever he does it, he always nails it.

7. When Wonho Misheard Kiyhun During The Whisper Challenge

Watching anyone do the whisper challenge is entertaining already, but when it's Wonho, it's even better. He always thinks he hears the funniest or most inappropriate phrases. In a March episode of Star Road, Wonho thought he heard Kihyun swear at him and his reaction was priceless.

8. When Wonho Showed Off The Size of His Biceps

In an October 2018 episode of Idol Room, Wonho gave the biggest flex by letting Monsta X measure the size of his biceps. Can someone tell me the results... uh, for science?

9. When Wonho Revealed His Solo Version of "If Only"

Monsta X's 2018 single "If Only" is a mid-tempo track that beautifully shows off all the members' impressive vocals. Shortly after the release of the song, Wonho revealed a solo version of "If Only" and it sounded heavenly.

At one point or another, everyone has been so speechless that they went ahead and just banged on their keyboard to express their feelings. Keyboard smashes are pretty common among fangirls, and one time, Wonho actually tried to pronounce one, which was the absolute cutest.

11. When Wonho Delivered A Cute Speech in English

Wonho will do anything for Monbebes, including giving a whole speech in English just to show fans how much he loves them. (Wonho starts speaking at the 1:30 mark in the clip above.)

12. When Wonho and Hyungwon Performed "Sexy Back"

No matter if he's speaking English or Korean, Wonho's seductiveness comes through in any language. That's certainly true about his performance of Justin Timberlake's "Sexy Back" on No.Mercy back in 2015.

13. When Wonho Cried Thanking Fans For Their Support

Humble, grateful, and appreciative are all words to describe Wonho because he never misses an opportunity to thank fans for helping him achieve his dreams.

14. When Wonho Showed Off His Biceps in Monsta X's "Fighter" MV

Confidence is sexy, OK? In Monsta X's 2016 "Fighter" music video, Wonho bared it all. In his scenes, he traded a T-shirt for an apron. Now, think of Wonho shirtless in an apron while sweating. You're welcome.

15. When Wonho Revealed His Abs In Monsta X's "Follow" MV

When Monsta X released their "Follow" music video, fans couldn't believe that, once again, Wonho put his muscles on full display. Oh, and he also covered his chest in fake tattoos, so there's that.

16. When Wonho Got So Giddy Over A Coffee

Nothing is better than coffee for recharging after a long day, and that's what made Wonho's reaction to getting a cup of joe so relatable.

Um, right now would be an appropriate time to use that keyboard smash because Wonho revealing his abs always leaves fans at a loss for words.

18. When Wonho Laughed At Himself While Doing Impressions

People who makes themselves laugh are the best kind of people. While attempting impressions of cartoon characters, Wonho couldn't help but laugh at himself over the hilarious sounds he made.

19. When Wonho Imitated The Staff's Gestures

Wonho can literally turn any moment into a joke!

20. When Wonho Said He Wanted To Eat Fans' Love

When a staff member asked Wonho what he wanted to eat, he said fans' love, which made Moonbebes gush with adoration over him.

While Wonho isn't with Monsta X anymore, that doesn't mean Wonho and Monbebes' love for each other has gone away. In fact, it's only gotten stronger. So Monbebes, cheer up, because Wonho would want you to be happy and continue supporting Monsta X no matter what.

More like this
These Songs About Loving Yourself Need To Be On Your Playlist
By Michele Mendez
The Best Movie Soundtracks Were So Good, They'll Live On Forever
By Brandy Robidoux
Taylor Swift's 'Fearless (Taylor's Version)' Lyric Changes Are Small, But Meaningful
By Michele Mendez
Stay up to date