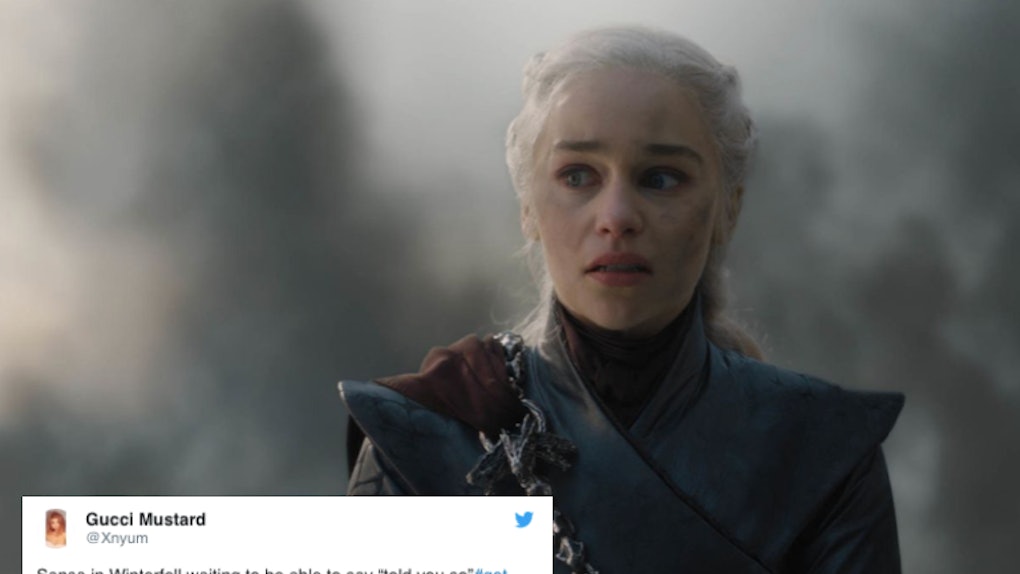 After six episodes, Game of Thrones' whirlwind final season came to an end on Sunday, May 19 — and Throners have some ~feelings~ about the long-running show's final segment. These 20 tweets about the Game Of Thrones finale are simultaneously so excited for the final installment while grieving the end of the show.

In Game of Thrones' final installment, viewers tuned in to watch the aftermath of the deadly Battle of King's Landing, which saw Daenerys and her dragon destroy much of the city that she'd come to conquer. During Episode 5 of Season 8, which aired on Sunday, May 12, fans were left wondering what would become of the Mother of Dragons, Arya, Jon Snow, Tyrion Lannister, and all their other favorite characters now that Daenerys had successfully taken the Iron Throne — albeit in a brutal fashion that had many of her former supporters questioning her tactics and judgment. The last episode ended with the victors helping Khaleesi take her place as Queen and Arya silently vowing vengeance against Daenerys amidst the wreckage of King's Landing before riding off on a white horse.

Needless to say, it's been a wild ride, and people had some serious feelings about how the creators of GOT decided to wrap up all the storylines of the past few seasons and crown the ruler of the Iron Throne and the seven kingdoms. Despite the fact that the eighth season of Game of Thrones featured some of the show's lowest-rated episodes to date and many fans weren't happy with how some things played out during the Battle of King's Landing (i.e. the Hound's death), it's impossible to deny that it's the end of an era. Love or hate how the show ended up tying up its loose ends, it's safe to say that it's been a rollercoaster of an experience — and Throners have mixed emotions about seeing the popular series come to an end.

Considering that the finale began with the emotional moment Tyrion found his brother Jaime and his sister Cersei buried under a pile of rubble, and Daenerys told her guards to take her former Hand away when he renounced his position as her advisor, it's safe to say that viewers were in for a final episode that was fraught with tension, the questioning of loyalties, and some more heartbreaking deaths from our favorite characters before the final credits roll.

Will Daenerys really execute Tyrion for taking back his loyalty? Will Jon Snow finally stop defending Daenerys and stand up to his queen after she mercilessly slaughtered a whole city? Will Arya kill Daenerys, as some fan theories have suggested? Unfortunately, only time will tell, and it's likely that the creators of Game of Thrones will have some unexpected plot twists and turns to keep viewers guessing about the future king or queen of the seven kingdoms until the very end.

More like this
Simu Liu's Tweets About The 'Kim's Convenience' Finale Promise "Tea & Receipts"
By Dylan Kickham
Is Netflix Making A 'To All The Boys' Spinoff Series About Kitty? Here's The Tea
By Rachel Varina
Will ‘The Falcon And The Winter Soldier’ Get A Season 2? This Could Be A Hint
By Ani Bundel
Stay up to date