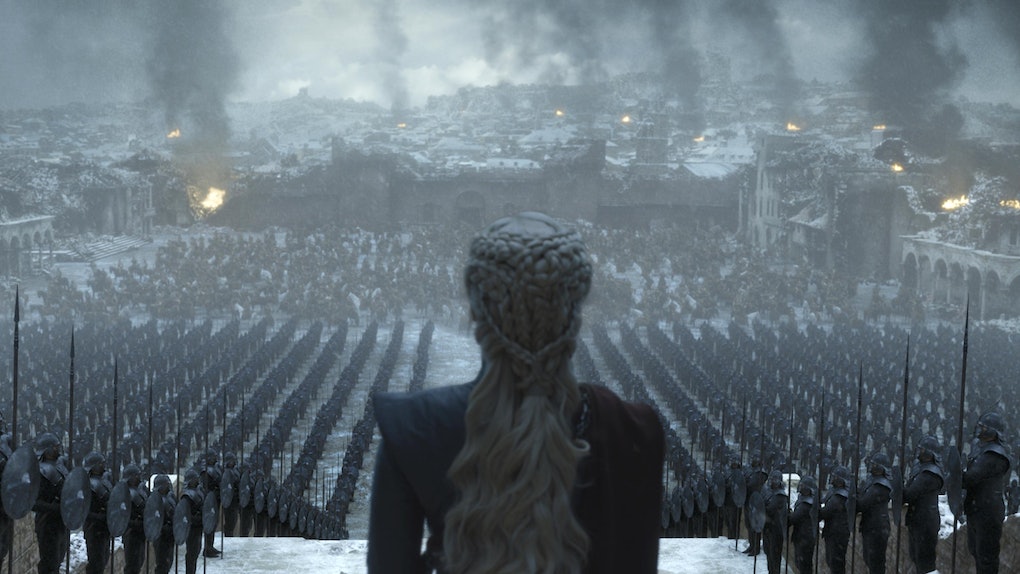 If it is the Wednesday before an episode, then it is Game of Thrones Photograph Drop Day. Thus has it been since 2011, until now, when the final photos for the last installment ever arrived. The production has worked hard to keep what happens in the finale under wraps, so there's not much in the way of spoilers (or photos) this week, with an entire count of two images to go off of. But considering HBO was generous to even reveal two stills, fans should be grateful these Game Of Thrones finale photos show anything at all.

The first photo (above) is an image everyone will recognize who has watched the series finale trailer multiple times. It's the image of Daenerys overlooking the city she destroyed, come to take possession now that it has been cleansed with fire. King's Landing, still smoking, lies in front of her, as the troops of Northerners who followed her down stand in front of the crumbling walls, and the Unsullied, somehow still impossibly numbering in the thousands, stand at attention at either side.

(After the losses at Casterly Rock, Winterfell, and King's Landing, one would think Daenerys' original 8,000 Unsullied, which she paid for by letting a Maester hold one of her dragons for a minute, would be down to a few hundred. I personally assume she must have had a few thousand more on backorder with Amazon ES, which finally shipped a few weeks ago.)

As for the other photo, it too is one that fans get a version of in the trailer. It's an image of Tyrion, walking through the broken streets of King's Landing, fires still burning in corners, the streets and rubble covered in piles of ashes, some of which are the remains of what was once the population that lived there.

The focus on Tyrion suggests that those who think he might be the one to take Daenerys down are incorrect. At this point, these photos should be treated not like information, but pieces of indirection. If viewers are being supplied with a picture of Tyrion, they should not automatically assume this final episode will be Tyrion versus Daenerys, but Tyrion unable to do anything about Daenerys.

Instead, the questions should be about those the show does not want to give out pictures of. Where, for instance, is Jon Snow? He's not in the trailer, or in the photos. How about Arya? The trailer shows her skulking through the crowd, looking like Death Personified. Why is she not pictured? Where is Grey Worm or Davos? There aren't a lot of supporting characters left around Daenerys, but one might want to ask where Sansa and Brienne are, or Sam Tarly, or even Yara?

How will Sansa and Sam react when they see the horror wrecked upon King's Landing by the woman Jon Snow insisted on bending the knee to? After all their warnings, he would not listen. Will they come to appeal to him one last time?