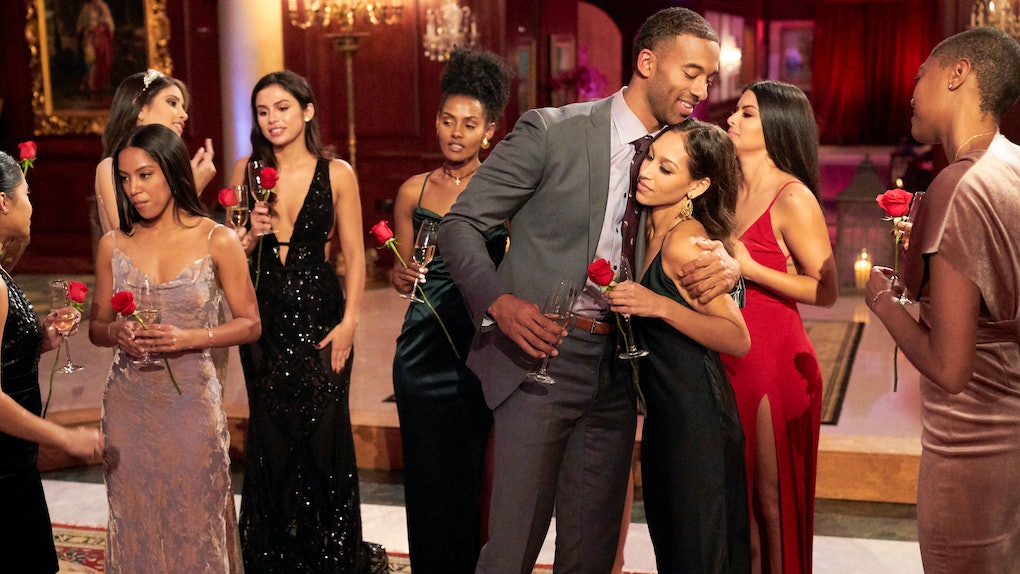 Over the past few decades, The Bachelor has grown into a reality dating empire. The franchise mixes drama, romance, and (more recently) social media antics in a way that has kept many viewers glued to their TV screens season after season. But after so many years, it can be nice to mix it up and find new series to fall in love with, too. Luckily, there are plenty of reality dating shows like The Bachelor to fulfill all your TV needs.

Let's be real, The Bachelor isn't just known for the good stuff. The franchise has been been called out multiple times for its lack of diversity and mishandling racism over the years. It's also still incredibly heteronormative and size exclusive. Maybe that's why you're looking for a replacement show to occupy your time in the first place.

Still, you can use your favorite components of Bachelor Nation to determine your new favorite reality show. Maybe you enjoy all the on-screen drama. In that case, you'll probably enjoy intentionally high-stakes series like Too Hot to Handle and Temptation Island. Or maybe you like watching sweet love stories unfold every season and could use some feel-good dating shows such as Love on the Spectrum.

Whether you're looking for even more drama to fill your days or are actively seeking an alternative to the Bachelor franchise in light of its most recent controversy, here are 20 shows like The Bachelor to provide all the onscreen romance and drama you crave:

Whether you're bummed that the Bachelor franchise hasn't cast an LGBTQ+ lead yet or you simply prefer the ensemble casts of Bachelor In Paradise, this is the show for you. Are You The One? centers on 20 single people whose "perfect" partners have been selected for them via a dating algorithm. Over the course of the show, the contestants have to try to figure out their dream partner's identity to win a cash prize.

Season 8 of the show featured a sexually fluid cast, bringing some much-needed LGBTQ+ representation to the reality dating genre (but also making the challenge of finding the right matches a lot harder).

Are You the One? airs on MTV and is streaming on Netflix.

One of the best parts of non-pandemic Bachelor seasons is getting to see all the luxurious locations the cast travels to over the course of the show. The Japanese show Ainori Love Wagon: Asian Journey also allows viewers to live vicariously through its seven contestants, who embark on a road trip and develop feelings for each other along the way.

Sure, not everyone on The Bachelor is wealthy, but seeing love stories develop against the fancy backdrop of the Bachelor Mansion is perfect escapist content. The same sort of lavish romance is on display in The Millionaire Matchmaker, in which star Patti Stanger attempts to set millionaires up with the matches of their dreams.

The Millionaire Matchmaker is streaming on BravoTV.com.

Rather than challenging people to get engaged or married at the end of their time on a reality show, Dating Around operates a bit more realistically. Every episode, a new person is set up on five blind dates. They later pick their favorite of those dates to go out with for a second time. Much less pressure.

Dating Around is streaming on Netflix.

The Bachelor franchise often has shows airing all year round, with The Bachelor, The Bachelorette, Bachelor in Paradise, and the occasional spinoff like Listen To Your Heart and Bachelor Winter Games. So, if you're looking for similar around-the-clock reality content, consider diving into 90 Day Fiancé. The TLC series follows Americans who bring their international partners to the States and have just 90 days to decide whether to get married or part ways. But that's just the tip of the iceber — from Before the 90 Days to Happily Ever After?, there are so many 90 Days spinoffs that it's hard to run out of romantic drama.

Part of the joy of watching The Bachelor is occasionally discovering iconic new reality TV stars. The early 2000s hit Flavor of Love is a prime example of a dating series that was a launchpad for a major reality celebrity: Tiffany Pollard, the woman behind a thousand memes. The show itself follows rapper Flavor Flav as he searches for his future wife among 20 contestants.

Flavor of Love is streaming on Hulu.

If you love the laid-back vibe and ensemble cast of Bachelor in Paradise, then Love Island will be right up your alley. The beloved British reality show brings together several young singles to spend weeks in a tropical villa dating and pairing up for challenges. In the end, the final couple standing receives a £50,000 (around $65,000) prize.

Love Island is streaming on Hulu.

Paradise Hotel is yet another dating show in which dramatic romance unfolds at a beachy resort. Over their time on the show, six men and six women couple up and decide if they want to stay together when new people join the show. In the end, the final couple remaining wins prize money. Then, they have to decide whether to share the money or dump their new partner and keep it for themselves.

Paradise Hotel is available to rent or buy on Amazon.

Bachelor couples getting engaged after a few months of dating is wild, but that's nothing compared to Love Is Blind. The hit Netflix show challenges people to go on a series of blind dates while sitting in "pods" where they can't see the other person's face and get engaged before ever meeting face-to-face. Then, they have to decide whether they'll get married in just a few weeks' time. If you're looking for a reality couple with an actual long-term happy ending, Lauren Speed and Cameron Hamilton are relationship goals.

Love Is Blind is streaming on Netflix.

As Bachelor devotees know, the franchise's on-screen relationship drama is just the beginning. It seems like there's always news about which Bachelor Nation couples are breaking up and sometimes getting back together again (looking at you, Clare and Dale). Back With The Ex deals with that on-again, off-again potential directly, challenging exes to see whether they can reignite their past romances.

Back With The Ex is streaming on Netflix.

The Bachelor and The Bachelorette usually end with engagements, but this show jumps straight to marriage. After two total strangers meet on their wedding day, they have to spend just a few weeks together before deciding whether they want to stay together.

If you love watching sparks fly between couples in Bachelor shows but get tired of all the drama, Terrace House could be the perfect fit for you. The charmingly low-key Japanese reality series follows six strangers who live together in a house as they hang out and sometimes date.

Terrace House is streaming on Netflix.

If you end up getting obsessed with Terrace House, you'll be happy to know there are other spinoffs within the reality franchise. Terrace House: Aloha State has the same premise, but it unfolds in Hawaii as the housemates date and adjust to American life.

The Bachelor is full of steamy make-out sessions, but what if contestants were suddenly forbidden from hooking up with — or even kissing — the lead? That's the juicy premise of Netflix's Too Hot to Handle, which gathers 10 single contestants to live in a beachside villa and compete for a $100,000 cash prize. But there's a catch: If they get sexually physical in any way, money is deducted from the final prize. Naturally, many people aren't able to stay celibate, but it's fun to watch the tension between them in the meantime.

Too Hot To Handle is streaming on Netflix.

Bachelor Nation will have to wait and see who replaces Chris Harrison in upcoming Bachelor content, but why not throw Karan Johar's name into the ring? The Indian filmmaker has his own Netflix show in which he mentors six singles looking for love with the help of special celebrity guests.

What the Love! With Karan Johar is streaming on Netflix.

Labor of Love actually has direct ties to Bachelor Nation, since series lead Kristy Katzmann was a contestant on The Bachelor Season 11. In the series, 15 men compete to start a family with Katzmann and hopefully fall in love at the same time.

Labor of Love is streaming on Fox.

Drama lovers are sure to find plenty to like about Temptation Island, which is exactly what it sounds like. Couples spend time on a tropical island together, and their commitment to each other is tested through a series of sensual challenges.

Temptation Island is streaming on USA.

It's hard not to feel good while watching Love on the Spectrum. The sweet Australian reality show follows several autistic adults as they search for love and form new connections. It's filled with endearing leads you can't help but root for in each episode.

Love on the Spectrum is streaming on Netflix.

Like Dating Around, this British series is all about the immediate connections that dominate Night 1 of each Bachelor season. Each episode, several couples go on first dates before sitting down on camera and discussing whether they'd go out with one another again (and why or why not).

First Dates is streaming on Amazon.

Ex on the Beach may as well be an alternate title for Bachelor in Paradise, so it's a solid choice for Bachelor Nation fans to watch. Billed as a "social experiment," the show opens as contestants go on what they think is a dating show in Hawaii. However, things take a turn when their exes show up unexpectedly, leading to plenty of steamy drama.

Ex on the Beach is streaming on CBS All Access.