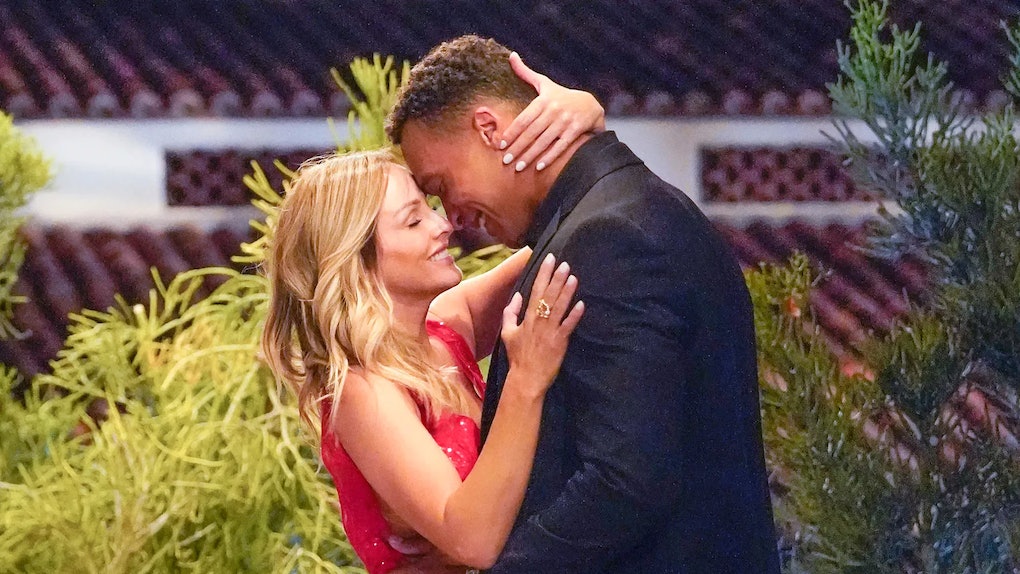 As if there wasn't already enough proof that they were on again, Clare Crawley and Dale Moss reportedly kissed on the beach in Florida over the weekend. In photos published by The Daily Mail on Feb. 22, the pair can reportedly be seen smiling, holding hands, and kissing as they stroll around a beach in Florida. The publication also shared a video of Moss reportedly carrying Crawley as she pecked him with a kiss.

While the footage reportedly does feature Crawley wearing a ring on her ring finger, The Daily Mail noted it reportedly "was not the $100,000 Neil Lane creation Moss proposed with" and that it "was the diamond ring she purchased for herself."

Rumors of a reconciliation between Crawley and Moss first started swirling on Feb. 16, when both Reality Steve and TMZ released footage of them reportedly together in Florida. Neither Crawley nor Moss have commented on the rumors, but fans guessed Crawley might have been low-key confirming them when she posted a Feb. 21 Instagram to her profile that featured Moss' feet in the background.

In case you possibly could have missed it (quick Q, though: how?), Moss was the first to announce he had Crawley had decided to go their separate ways with a since-deleted Jan. 19 Instagram post. His post made it seem as though their split was a mutual decision, but Crawley took to her own Instagram page on Jan. 21 to say otherwise. In her statement, Crawley began by saying that "was made aware of a 'mutual' statement at the same time you all were."

Since then, things only got messier as many fans accused Moss of using Crawley for fame. Even former Bachelorette Rachel Lindsay still isn't totally convinced his intentions are pure.

“I’ve said he’s in this for the fame, I’ve said he used my poor girl Clare, and I stand by those statements,” Lindsay said of Moss during the Feb. 23 episode of her Higher Learning With Van Lathan and Rachel Lindsay podcast. “I’m not gonna take that back because I’ve seen them flaunting their relationship in Florida and having a good time."

She added, "My girl looks happy. I’m happy for Clare. I will say I spoke with Clare about two weeks ago and I'm just a little shocked by what I'm now seeing.”

To be fair, whether or Moss actually is using Crawley for fame, I think it's safe to say that pretty much all of Bachelor Nation is shocked by this reconciliation.

More like this
Clare Crawley's Tweet About Matt James Reportedly Dating Grace Amerling Is Shady
By Candice Jalili
Dale Moss' Instagram With Clare Crawley Suggests They're Back Together
By Corinne Sullivan
Did Bennett Jordan Send Kelley Flanagan Flowers? Here's Why Fans Think So
By Candice Jalili
Stay up to date