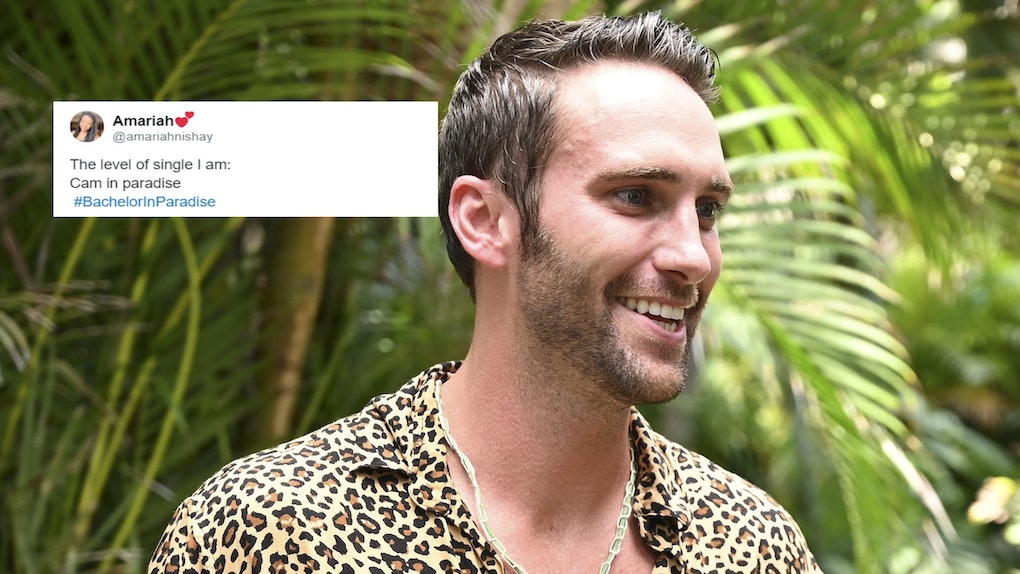 If there's anything Season 15 of The Bachelorette taught us, it's the motto "ABC," or "Always Be Cam." Contestant Cam Ayala became a Twitter favorite for his spontaneous raps and chicken nugget displays, but he didn't have the smoothest Bachelorette exit. Then, despite an energetic start, Season 6 of Bachelor in Paradise wasn't an easy ride for Cam either. He may be a slightly polarizing figure, but if you're sad because he failed to receive a rose at the end of Week 2, these memes about Cam on Bachelor in Paradise will definitely cheer you up.

After watching his love interest Caelynn Miller-Keyes go on dates with Mike Johnson and Dean Unglert, Cam was left in the dust on the sands of Paradise. As Caelynn explored her new connections, Cam went on a lot of long, solo walks around the beach and didn't seem to try to explore another relationship. Although he banked on Onyeka for a friendship rose to get him through to another week, his plan was foiled in Aug. 19's episode when Onyeka sent herself home because she wasn't connecting with anyone.

Similar to his Paradise entrance, Cam began his Bachelorette experience with a bang when he scored the season's first rose during the announcement of Hannah Brown as the new lead. His rapping skills impressed her, but entering the mansion with a free pass seemed to make the Texas native a little cocky. He crashed a group date he wasn't invited to and later scrambled to explain his medical condition when he feared that Hannah would send him home. After being eliminated on suspicion of wanting a "pity rose," Cam headed to the Paradise beach with a newfound energy.

Of course, that buoyant mood was gone by the time Onyeka's self-elimination led to the end of his Paradise journey. Fans on Twitter poked fun at Cam's confidence prior to her announcement, but can't everyone relate to their expectations completely crashing and burning at least once in their lives?

Before his sudden exit, Cam managed to begin the season on a positive note. He set his sights on Caelynn, who seemed open to him after she confronted Blake Horstmann about their shared past. However, he was interpreting their relationship as endgame, speaking to cameras about wanting to find his wife and the mother of his children. "Before I was even on The Bachelorette, I wanted [Caelynn] to be my Bachelorette,” he said on the show. “It’s very surreal to think that in a very short period of time, I could be proposing to Caelynn.”

The fact that Caelynn was first swept away by Mike, a major instigator in Cam's Bachelorette pity rose case, didn't help Cam's coping. "I was born to be a husband, I was born to be a father,” he tearfully said. “It’s gonna happen … I just want it to be here."

Cam went into full brooding mode when Caelynn went on a date with Dean and essentially paired off with him. As a result, Cam roamed aimlessly around the beach, resonating with viewers yet again.

Paradise really threw Cam his own pity party, but he's joining in on the online fun, too. On his own Twitter account, he made several jokes about his experience as his final days in Paradise played out on TV.

Cam may have left the Paradise beach, but it looks like he's still staying optimistic about love. Maybe Bachelor Nation should reconsider the benefits of his "ABC" mantra. Good luck in love, Cam!