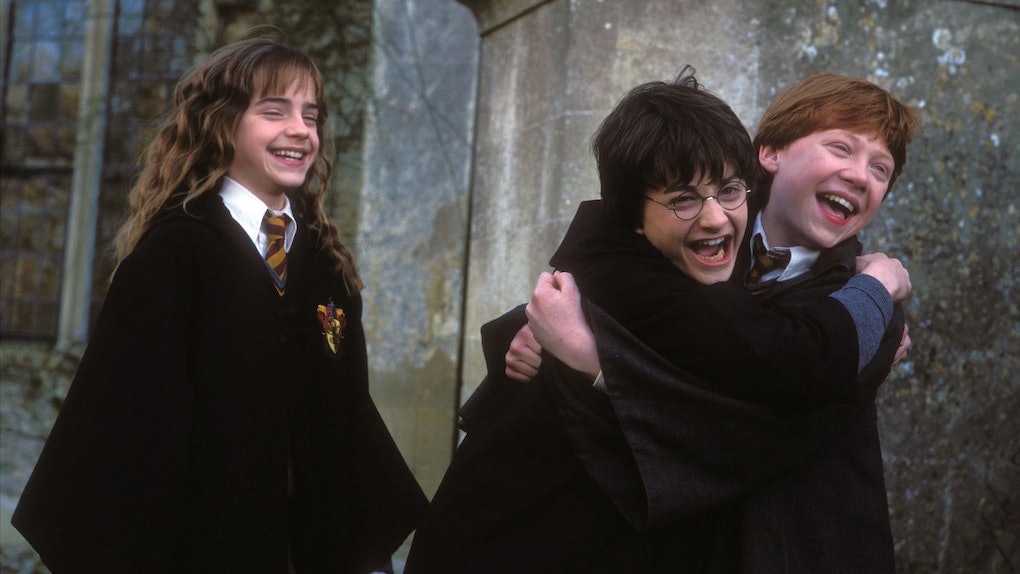 The world of Harry Potter is full of magical secrets and intricate details, but some of the most shocking and intriguing stories actually happened behind the scenes of it all, while translating J. K. Rowling's hit book series into an iconic film franchise. From controversial story adjustments to casting decisions that would have changed everything, these Harry Potter movie facts will have every superfan seeing the movies in a whole new light on their next rewatch.

The world first caught Harry Potter mania when Rowling published Harry Potter and the Sorcerer's Stone in 1997. The first book captivated readers of all ages, and it kicked off a novel series that became the hallmark of popularity in the young-adult fantasy genre. In 2000, two things happened to bring the immensity of the fandom to a completely new level: The fourth book, Harry Potter and the Goblet of Fire, was published, and Warner Brothers began the film series adapting the saga. Rowling's story continued through the seventh book, Harry Potter and the Deathly Hallows, which hit shelves in 2007, and the movies finally concluded a few years later when the second half of the Deathly Hollows adaptation hit theaters in 2011.

It would be hard to overstate just how huge of an impact Harry Potter has had on the entertainment industry, as it has been hailed for legitimizing a passion for YA books and laying the groundwork for massive teen movie sagas like Twilight and The Hunger Games to dominate the box office in its wake. But the real magic came from the little-known facts about how these hit movies came to be.

The woman responsible for all of the Harry Potter magic nearly showed up in the movies, but ended up opting out. Rowling wrote on her website that she was offered the part of Harry's mother Lily Potter during the filming process for the first movie, but she turned it down, saying she was not cut out to be an actress... even if it was just a small role.

A huge fan of the books, Williams asked to play Hagrid when he found out about the movie adaptation. Unfortunately, one of Rowling's strictest requests for the movies was that the cast only include British actors, so Williams, an American, was not allowed to audition.

Initially, Spielberg was on board to direct the first Harry Potter film, but he dropped out after a few months of working on the movie. Spielberg has said he was not ready to make an all-kids movie and that he did not see the movie as challenging enough for him, so the job went to Chris Columbus instead.

During the casting process for Harry Potter and the Sorcerer's Stone, the film's team went to schools all over England searching for the perfect young actors to play the movie's lead trio. Watson had never professionally acted at that time, and was super nervous to be among the group of 20 or so girls at her school to audition for the part of Hermione. She admitted she was intimidated by the other girls, who had more acting experience than her and seemed to bond with the boys auditioning for Harry better, but she felt the part was perfect for her.

One of the biggest undertakings in bringing the world of Harry Potter to life was training owls to deliver mail. The process took months, but the production team was able to reliably get owls to carry letters to the actors. To add even more realism, the production team hand-wrote all of those Hogwarts acceptance letters the owls brought to the Dursley house in the first film.

6. Harry Never Casts A Spell In The First Movie

For being one of the greatest wizards ever, Harry really does not have an impressive showing in Harry Potter and the Sorcerer's Stone. As wild as it sounds, Harry really does not cast a single spell in the entirety of the first movie. Sure, he makes the glass at the zoo disappear and he learns to fly a broom, but no magic ever comes from his wand.

Felton was not always going to play the bad guy. Originally, he revealed, he auditioned to play Harry Potter and then Ron Weasley, and only landed the role of Draco after both of those lead roles went to Daniel Radcliffe and Rupert Grint.

Potterheads have Felton to thank for one of the film franchise's shining moments. In Harry Potter and the Chamber of Secrets, Harry uses Polyjuice Potion to transform into Draco Malfoy's crony Goyle, but accidentally wears his own signature glasses, prompting Draco to ask about them. When "Goyle" responds that the glasses are for reading, Draco hilariously says, "I didn't know you could read." Later on, Felton revealed he made that line up on the spot because he could not remember his actual line.

9. Eddie Redmayne Was Almost In The Original Franchise

Redmayne stars in the Harry Potter prequel Fantastic Beasts series as Newt Scamander, but he actually nearly entered the magical world years earlier. Redmayne revealed that he auditioned to play Tom Riddle for Harry Potter and the Chamber of Secrets, but did not get a callback.

10. Tom Riddle Has A Different Name In Each Translation Of The Movies

The most important twist in Harry Potter and the Chamber of Secrets is that the name Tom Marvolo Riddle is an anagram for "I am Lord Voldemort." In order to make that wordplay work in languages besides English, Rowling and the movie team gave Riddle different names in several other languages. One of the silliest is that, in French, Tom Riddle's name is Tom Elvis Jedusor, which rearranges to "Je suis Voldemort."

Hogwarts' most self-involved Defense Against the Dark Arts teacher almost had a totally different look. Hugh Grant was originally cast in the part, but had to step away from the movie, reportedly due to scheduling conflicts with his 2002 rom-com Two Weeks Notice, so Kenneth Branagh instead won the role.

12. The Actor Who Played Moaning Myrtle Was A Bit Older

Moaning Myrtle was a forlorn teenage ghost in the Harry Potter movies, but the actor who played her, Shirley Henderson, was actually 36 when she first played the teen ghost.

13. Russia Sued The Movies Because Dobby Looked Like Vladimir Putin

Not everyone was a fan of the house elf Dobby when he made his film debut. A lawyers' guild in Russia planned a lawsuit against the film series over claims that Dobby's appearance was based on that of Russian leader Vladimir Putin.

14. The Actors Had A Perfect Homework Assignment

Harry Potter and the Prisoner of Azkaban was the first time that the franchise changed directors, and Alfonso Cuarón assigned the three leads the perfect task to try to get to know them and their characters even better. Cuarón tasked Radcliffe, Watson, and Grint to write an essay about their own characters. Their responses perfectly mirrored their characters: Radcliffe turned in a one-page essay that got to the heart of Harry, Watson totally overachieved with 16 pages on Hermione, and Grint blew off the assignment altogether, noting it was "quite Ron-ish not to do it."

15. The Deathly Hallows Symbol Was Hidden In The Fourth Movie

If it seemed like Rowling was hiding clues about the future of her Harry Potter series within the earlier movies, it's because she was. Fans noted that the Deathly Hallows symbol can be seen on a shelf in Dumbledore's office shortly after he uses his pensieve in Harry Potter and the Goblet of Fire. That movie was released in 2005, two years before Rowling would publish the final Harry Potter book and introduce the Deathly Hallows.

Harry Potter was able to take the theatre world by storm with the 2016 play Harry Potter and the Cursed Child, but it almost got the Broadway treatment much earlier. Rowling revealed that Michael Jackson had approached her with the idea of turning her book series into a musical, but she turned the notion down.

Harry's glasses are part of what makes the character so iconic, and Radcliffe certainly spent a lot of time wearing specks over the course of filming the eight movies. In total, Radcliffe went through 160 pairs of glasses in his time as Harry, and about 60 different wands as well.

When it came to finding a young actor to play Tom Riddle as a child, the Harry Potter casting team did not have to look far. Hero Fiennes-Tiffin portrayed the boy who would become Voldemort in Harry Potter and the Half-Blood Prince, and he definitely had the resemblance down, considering his uncle is Ralph Fiennes, the actor who played Voldemort.

19. That Awkward Voldemort/Draco Hug Was Improvised

One of the most unexpectedly ridiculous moments in the final Harry Potter movie came when Voldemort awkwardly embraced Draco outside Hogwarts. Tom Felton revealed that Ralph Fiennes totally improvised that hug, only doing it in one of the several takes of that scene. Even Felton was shocked by how menacing and strange it was.

20. Alan Rickman Was A Pro At Stealing Props

Apparently, it was not very easy for actors to take home meaningful props, but Rickman was a master at pocketing stuff. Jason Isaacs, who played Lucius Malfoy, said Rickman swiped a ton of Gringotts coins from set one day. Rickman also apparently kept Snape's wand, and hinted he may have snuck away with his cloak, as well. Who could blame him? When you're working on a film as magical as Harry Potter, you gotta take what you can get.

More like this
The Best Movie Soundtracks Were So Good, They'll Live On Forever
By Brandy Robidoux
These Fake 'Riverdale' Brand Names Are Even Better Than The Real Thing
By Rachel Varina
These Songs About Loving Yourself Need To Be On Your Playlist
By Michele Mendez
Stay up to date