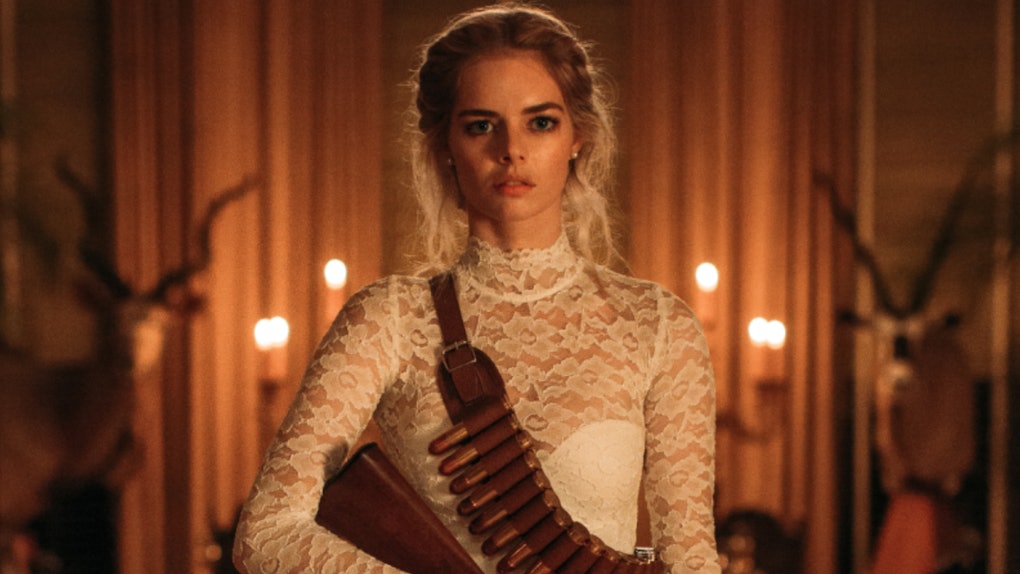 As you're unpacking your fall sweaters and looking up the nearest pumpkin patches, odds are your movie preferences are changing right along with the weather. If you're ready to trade your steamy summer flicks for movies that are darker, scarier, and perfect for making you want to curl up in the fetal position, you're in luck. It turns out, there are a ton of Halloween movies on HBO Max just waiting to make you afraid to fall asleep with the lights off this spooky season.

While lots of other streaming services have scary movies to fill your fall nights with suspense, HBO Max has a great mix of both new gems and cinema classics that might as well be considered required viewing come October. Naturally, scary movies can range from dark comedies to downright terrifying thrillers, so luckily, the streamer has a great combination whether you're looking for something that will make you jump in your seat or keep you wide awake for a week.

From Doctor Sleep (the long-awaited sequel to The Shining) to the entire Alien series, Jeepers Creepers to The Exorcist, here are the best scary movies on HBO Max that are sure to keep you on your toes all season long.

Who would have guessed one of 2019's best-reviewed horror films would also have you cackling with laughter, but that's what makes Ready or Not so good. Samara Weaving (The Babysitter) stars as a just-wed bride who married into a family that'll make your SO's parents look like angels. While it might seem like it's all fun and games at first, things get real twisted, real fast.

This 1996 classic stars Quentin Tarantino, George Clooney, and Salma Hayek in a horror-comedy you have to see to believe. While I don't want to give too much away (since the surprise is half the excitement in this flick), I can say Hayek's snake dance in From Dusk till Dawn absolutely puts the one on Riverdale to shame.

Signs, starring Mel Gibson and Joaquin Phoenix, is a 2002 sci-fi thriller that will make you think just as much as it makes you jump. Written and directed by M. Night Shyamalan, this is a great film if you're looking to take a break from slasher films and want something more eerie than outright terrifying.

A classic film you can watch anytime between Halloween and Christmas, Gremlins is has an iconic theme song and the little monsters will remind you suspiciously of Furbys (if you were ever so unlucky as to own one). Just make sure if you watch this movie, you don't eat anything after midnight.

If you hate small spaces, you'd probably hate being trapped in an elevator. Now add in the devil to the elevator, and you have the premise of this 2010 horror-mystery from M. Night Shyamalan. If you're cool taking the stairs for the rest of your life and never trusting anyone you share a confided space with again, watch Devil ASAP.

If you're having a movie marathon kind of day, take it back to 1979 and the start one of the most beloved horror film franchises: Alien. The film follows a crew of astronauts who respond to a distress call from an alien ship as they return home from a mission.

While this 2005 slasher film has an interesting story (a group of hot friends get stranded in a ghost town and end up at a haunted wax museum), it's the fact that Paris Hilton is in the cast that makes it a true classic. House Of Wax might not be the best horror film around, but you'll have a scary good time watching Hilton and Chad Michael Murray in all of their early 2000s glory.

This surprisingly creepy film starring Gina Philips and Justin Long follow siblings who get run off the road in Florida and discover an evil force is trying to kill them. Not only does Jeepers Creepers have some major "jump in your seat" moments, but the theme song is perfectly creepy and will soon make its way to your Halloween mix on Spotify.

If you're a fan of Nightmare on Elm Street series (you can watch the 1984 original on Prime), you'll be immediately sucked in by the 1994 sequel, Wes Craven's New Nightmare. In this installment, Freddy Kruger goes after the cast and crew of the series in a fantasy-meets-reality mockumentary-style horror film.

If you're a fan of Stephen King (who isn't?) and you loved The Shining (who doesn't?), the long-awaited sequel based on the best-selling novel will not disappoint. Doctor Sleep follows Dan Torrance (the little boy in the original film all grown up) as he struggles to overcome the horrors that went down in The Overlook Hotel when he was young.

If you haven't seen one of the most iconic horror films of all time (and the reason plenty of people are still afraid to go in the ocean), Jaws is officially being adding to your required viewing list. Not only is the first movie on HBO Max, but Jaws 2, Jaws 3, and Jaws the Revenge are as well — which means it's perfect time to retire your swimsuit for the season and watch a franchise about a giant, murderous shark.

If Jaws isn't enough to make you a land lover, Piranha will do the trick. Joe Dante, who also directed Gremlins, is the mastermind behind this 1978 flick about flesh-eating fish. If you've been aching to take a resort vacay, this cult-classic will quickly cure you of any travel pangs.

13. 'Interview With The Vampire'

It's hard to imagine a horror romance movie being good, but Interview with the Vampire, based on Anne Rice's debut novel of the same name, manages to check off all the boxes. Spooky Halloween vibes? Star-studded cast? Love triangles? Check, check, check. If you're looking for a scary-yet-sexy watch, this award-winning 1994 classic is for you.

While all of the above movies are scary, The Exorcist takes the concept to a whole other level. The 1973 film is the definition of terrifying and has been called one of the best horror films of all time over and over again. If the movie doesn't make you sleep with the lights on (impossible), the lore surrounding all the creepy things that went on during production will surely do the job.

If you're a fan of zombies and haven't yet seen the 1968 horror classic, Night Of The Living Dead, you're in for a scary treat. The film follows a group trying to survive an attack of undead corpses. The film received praise not just for its horror elements, but for portraying a Black man in a role that wasn't centered around his race, which was pretty groundbreaking for the time.

If you're ready for a movie night — and are a fan of superhero stories — the Blade trilogy on HBO Max is a must for movie night. The films are based on the Marvel comics are about a human with the strengths of vampires (but not their weaknesses) fighting advanced vampires who are, in turn, trying to kill him. The first, second, and third films are all on HBO Max, so get comfy and let the twists unfold.

If you're looking for something quick that'll pack a punch, Hair Wolf magnificently mixes monsters with social commentary. This short 2018 horror-comedy highlights the staff of a Black hair salon in Brooklyn as they fend off white women intent on sucking the lifeblood from their culture.

M. Night Shyamalan did it again with the Eastrail 177 Trilogy, a psychological horror film series with lots of superhero elements. The first in the series, Unbreakable, is about a man who shockingly survives a train wreck. The first and the third film (Glass) are on HBO Max, and you can watch the second installment (Split) on Amazon Prime.

In case you're in the mood to watch a film about the outbreak of a deadly virus (sound familiar?), the 2011 film, Contagion, hits scarily close to home. While the thriller isn't about ghosts or ghouls, the reality it mirrors to viewers in 2020 will absolutely give you a fright.