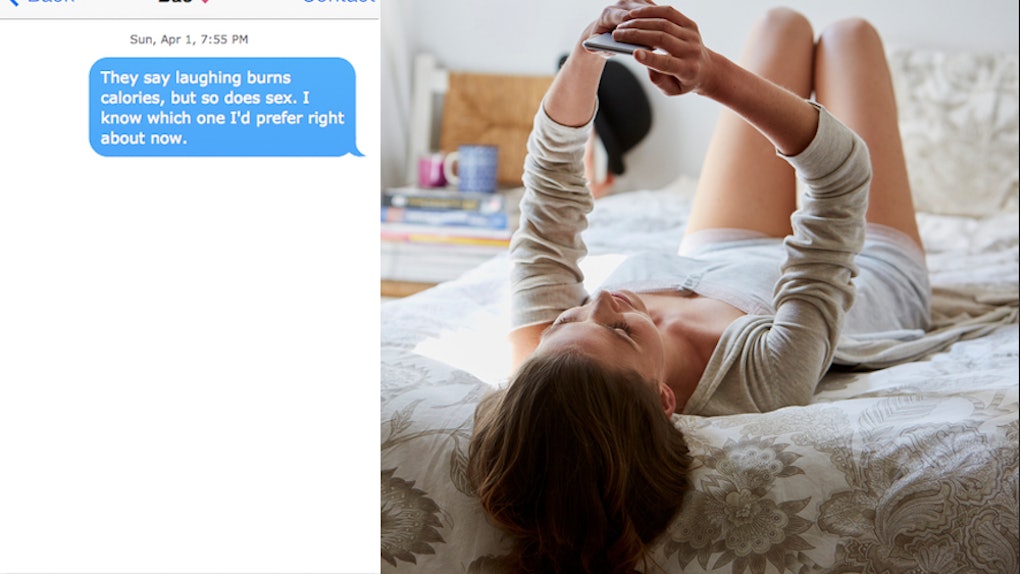 If you think you're too old to pull an April Fools' Day prank on your crush or significant other this year, think again. You may be older and wiser, but that just means your tricks have matured along with you. Put your own spin on the classic April 1 tradition by sending your partner or FWB one of these 20 dirty April Fools' Day texts. It's not quite as involved as a practical joke, but each one of these playful texts was carefully crafted by yours truly in the spirit of the holiday. And if you're worried about the reaction of the person on the receiving end of your messages, don't be. They can't really be mad, because, after all, you are sexting them.

April Fools' Day is meant to be a lighthearted occasion, so don't be afraid to let loose and have a little fun. Whether you have a way with dirty words or you're more of a sporadic sexter, you and your partner will both get a kick out of these silly messages. Wake up your boo with a sultry good morning text, or send them something sweet later in the day for an afternoon delight. Even if you mostly mean it as a joke, you never know where it might lead. A sexting marathon-turned-marathon hook-up sesh is serious business.

4. They say laughing burns calories, but so does sex. I know which one I'd prefer right about now.

5. My name may not be April, but I'm still a fool when it comes to loving you.

6. It's April Fools' Day, so come over and I'll show you some of my best tricks.

8. Want to play Fortnite together? April Fools! But now that I have your attention, I can think of another cooperative activity for us...

9. They say April showers bring May flowers, so we should probably take an April shower together.

11. It's April Fools' Day, so let's have ridiculously hot sex.

12. All fooling aside, you never fail to turn me on.

13. Fool isn't my favorite four letter word, but I'll give you a hint: It also starts with an F.

15. I think I might be fooling in love with you.

16. Those pants are a joke. You should probably take them off.

18. Confession: I've always wanted to make out with you.

(If they don't feel the same way, you can play it off as an April Fools' Day joke.)

20. Fool me once, shame on you. Fool me twice, and we might as well go a third time.

Have a good time with these texts, but have an even better time with the inevitable hookup your flirty messages are sure to inspire. And feel free to implement the winking face, smirking face, eggplant, or peach emoji wherever you see fit. I trust you.