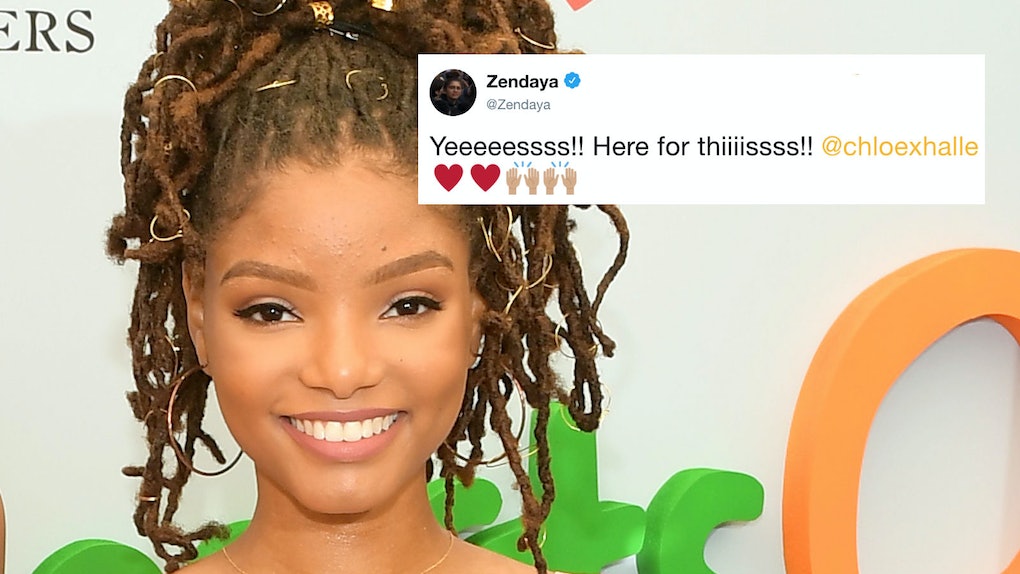 Disney fans finally have their Ariel to helm the upcoming live-action The Little Mermaid remake. After a lot of speculation about who would nab the starring role, director Rob Marshall confirmed that R&B star Halle Bailey will be heading under the sea. Of course, Twitter immediately exploded once the casting announcement was made, and these tweets about Halle Bailey as Ariel in The Little Mermaid show just how excited everyone is for the young singer to take on the iconic role.

On Wednesday afternoon, Little Mermaid director Rob Marshall confirmed that Halle Bailey will play Ariel in his upcoming live-action adaptation of the Disney classic, per Variety. Bailey is joining a growing, star-studded cast, which includes Jacob Tremblay as Flounder, Awkwafina as Scuttle, and Melissa McCarthy as Ursula. Reportedly, Bailey had been the clear frontrunner for the lead role from the beginning, and Marshall gushed over his new star in a statement accompanying the casting announcement:

After an extensive search, it was abundantly clear that Halle possesses that rare combination of spirit, heart, youth, innocence, and substance — plus a glorious singing voice — all intrinsic qualities necessary to play this iconic role.

Halle Bailey is best known for being half of the rising music duo Chloe x Halle, along with her sister Chloe Bailey. The pair got their start by recording pop covers on YouTube, which helped them to get noticed by none other than Beyoncé. The sister signed to Beyoncé's record label under which they released an EP and a studio album of their original songs. They also played as the opening act for part of Beyoncé's Formation World Tour, and appeared in Bey's Lemonade visual album.

While The Little Mermaid will serve as Halle Bailey's film debut, it is not her acting debut. Along with her sister Chloe, Bailey currently stars in the Freeform college sitcom Grown-ish, a spinoff of ABC's Black-ish. Chloe and Halle play twin track stars Jaz and Skylar in the series. The duo celebrated the casting news by posting an updated image of Ariel to their Twitter account.

And one of the first people to congratulate Halle Bailey on landing the iconic role was the person most highly rumored to be getting the part, Zendaya. Rumors have been floating around for months that Disney was eyeing Zendaya to play Ariel in the new version of the movie, but even if that was true, there are clearly no hard feelings about Halle Bailey getting the role.

Of course, the casting is also groundbreaking in terms of colorblind casting, since Ariel had pale skin in the 1989 cartoon. Several fans pointed to 1997's Cinderella remake as an exciting precedent for this casting choice. That movie starred Brandy as Cinderella, with Whitney Houston as her Fairy Godmother and Whoopi Goldberg as the Queen. Check out all of the best tweets about the casting news below:

The Little Mermaid is scheduled to begin production in April 2020, and does not yet have a release date.