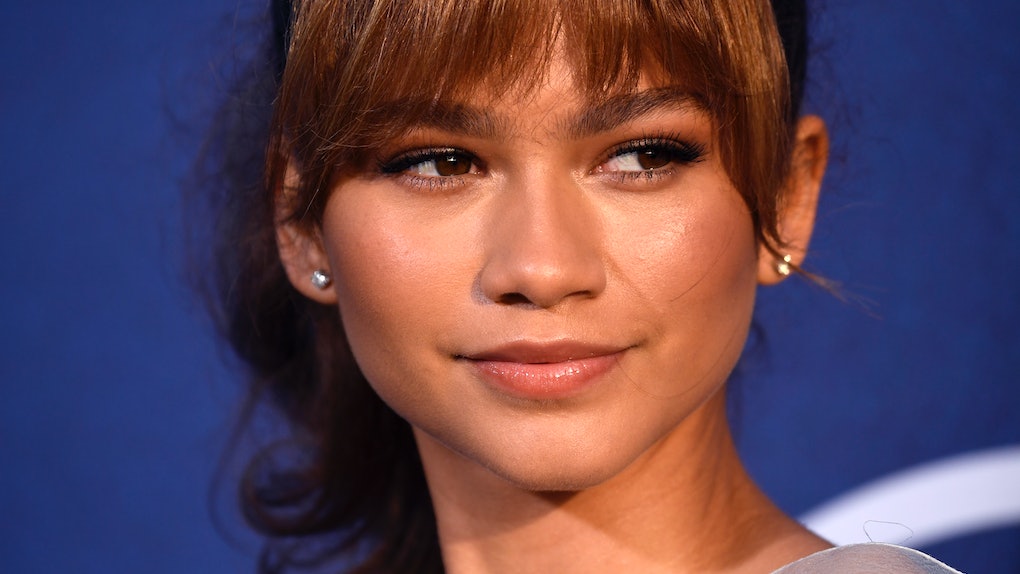 World, I don't even want to tell you about the sound that came out of my mouth when I opened up Instagram this morning and saw that Zendaya — my girl, Zendaya — had dyed her hair red. I mean, Zendaya has proved time and time again that she can rock any and all looks, so it went without saying that red hair on the multi-talented superstar would look stunning. But actually seeing it right there in front of you? Well, that's a whole different thing. And let me tell you, these photos of Zendaya's new red hair not only knocked me down dead and brought me back to life on sight, but they also have fans on Twitter making one very particular demand to Disney when it comes to one of their highly anticipated future movie adaptations.

OK, so here's what went down: The whole cast of Spider-Man: Far From Home assembled in London on Monday, June 17, for a photocall promoting the movie, which is set to premiere on July 2. Zendaya's castmates Tom Holland, Jacob Batalon, and Jake Gyllenhaal showed up looking, well... like they usually do (albeit, dressed to the nines). But Zendaya shook things (read: my entire world) up by showing up with brand new fire-engine red hair.

What the what?! Ummm... Zendaya?! Can you warn a girl when you plan on slaying her entire life in one photo? Here's another shot:

And here she is with the rest of the cast:

As these things go, Twitter is now theorizing about why Zendaya died her hair red. Sure, her Spider-Man character, MJ, has historically been a redhead in the comics, but shooting for the movie ended so long ago and production on a third installment has yet to be announced. So, since "she just wanted to dye her hair red" simply is not a good enough answer for Twitter, they have another theory.

See, Twitter has been begging Disney to cast Zendaya as Ariel in the planned live-action adaptation of The Little Mermaid for ages, so can you blame fans for automatically jumping to the conclusion that this was Zendaya signaling that she would, indeed, play the most iconic mermaid there is?

Sadly, Zendaya shut down the speculation before it could really take off, taking to Twitter to confirm that the simplest explanation for her red hair was, in fact, the real one: It's just an homage to her Spider-Man character, MJ. (An only-semi-permanent homage, at that.)

She also confirmed any speculation she'd play Disney's Ariel was just that — speculation.

But just because the speculation surrounding Zendaya playing Ariel is just speculation doesn't mean it can't become a reality! The role of Ariel still has not been cast, after all.

And if we're going to talk fan casting, we can't not mention all the dream options fans have thrown out there for the role of Prince Eric. Prince Eric was actually trending over the weekend, with fans throwing their faves into the mix for consideration. Of course, Harry Styles and Noah Centineo are two popular choices, but I'm personally partial to the popular fan-casting of my ultimate fave, Park Jimin of BTS. Like, have you seen black-haired Jimin in a white shirt? TOTAL Prince Eric vibes!

More like this
Zendaya's Instagram About Voicing 'Space Jam: A New Legacy's Lola Bunny Is A Throwback
By Abby Monteil
How Long Has Billie Eilish Had Blonde Hair? She Hid It For Months
By Daffany Chan
Cardi B Is Dropping A Hair Care Line Sometime In 2021
By Margaret Blatz
Stay up to date