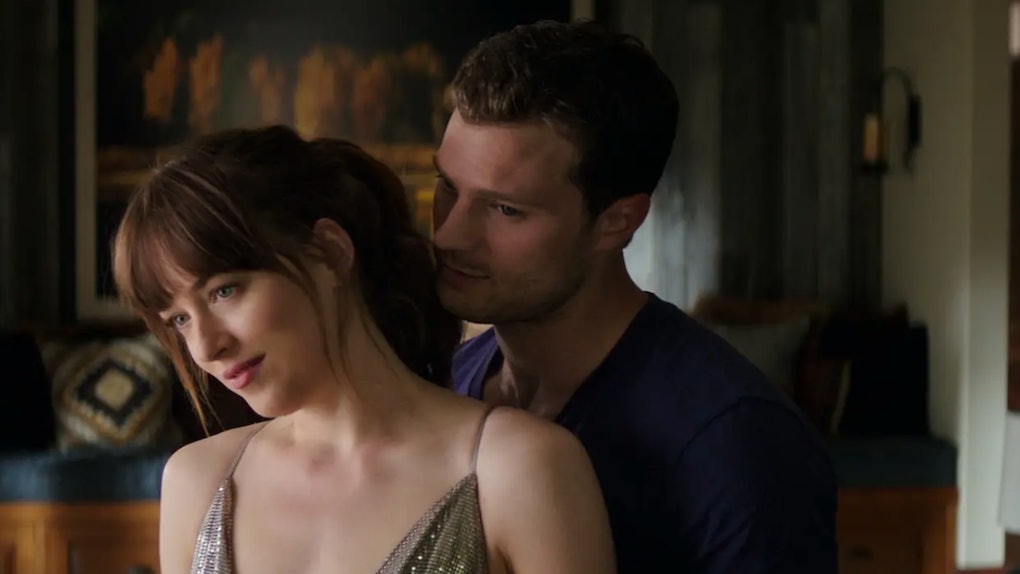 Love it or hate it, few films spiced up everyday life quite like the Fifty Shades trilogy. Whether it was Christian's (Jamie Dornan) smoldering looks, Ana's (Dakota Johnson) relatability, or the sex scenes that made you low-key uncomfy in theaters, the polarizing series made some seriously sexy waves. While it might seem like Mr. Grey's kinky preferences gave way to the hottest scenes ever shown onscreen, there are actually plenty of other movies like Fifty Shades Of Grey with lots of steamy sex to get you in the mood.

Despite the controversy surrounding the franchise, fans couldn't get enough of watching Anastasia Steele and Christian Grey going at it — so for them, it was a blessing two more films were released in 2017 and 2018, respectively. While there's plenty of sultry sex in all three films, if you're looking for even more titillating inspiration, these below films will make any Fifty Shades fan feel the heat:

If you haven't watched what fans deem "the original Fifty Shades," this is officially your homework assignment. Maggie Gyllenhaal stars as a secretary for a hard-to-please lawyer named E. Edward Grey (yup, his last name is also Grey). The film follows their torrid relationship as he takes her under his dominating wing and teaches her about taboo desires. Rent it on Amazon for a look at a very familiar story.

In case you couldn't guess, things get very messy and very sexy in this dark film. You can rent Chloe on Amazon for a watch you won't forget.

Adam Scott and Taylor Schilling star as a couple who just moved to Los Angeles and are are struggling to make friends (#relatable). After meeting Kurt (Jason Schwartzman) at the park, they agree to dinner at his home. There, they meet his wife (Judith Godrèche), get very drunk, and all get very, very close as their boundaries and inhibitions ebb away. Rent The Overnight on Amazon for a look into a different perspective on married life.

Two millennials decide to try having an open relationship after their passion grows stale. Both lovers of casual hookups, it seems like the perfect plan... until jealousy and secrets get in the way. Watch it on Netflix when you want to be titillated.

While you might not think of The Notebook as the hottest movie around, that's just because you're not watching it the right way. First of all, there's the rain scene, which in itself is a pure aphrodisiac. But the real lure can be found in the deleted scenes.

Find your old, dusty DVD and give the shots that didn't make it into the final cut a watch. Your view of Allie (Rachel McAdams) and Noah's (Ryan Gosling) love story is about to get much hotter. Rent the classic on Amazon or raid your old DVD collection for the really good stuff.

Between stripteases, kinks, and bondage, 9 1/2 Weeks is basically like Fifty Shades from the '80s. After a Wall Streeter seduces an inexperienced art dealer, things get real steamy, real fast. Rent it on Amazon if you're in the mood to get in the mood.

ScarJo is at it again in this sweltering Spain-set story in which she falls in love with a handsome artist. After his ex comes back into the picture, the three start a relationship together with sex scenes so hot, you'll want to book a one-way ticket to Barcelona. Rent it on Amazon and get ready to swoon.

Inexperienced? Quiet? Into guys who are all wrong for her? Check, check, check. After a timid college student (Josephine Langford) meets a mysterious bad boy (Hero Fiennes Tiffin), their subsequent relationship quickly heats up. Check it out on Netflix. Extra bonus? The sequel, After We Collided is also on Netflix and the shower scene alone is reason enough to watch.

If you are a fan of unlikely relationships and lots of spanking, A Dangerous Method is most likely going to be your new favorite "get in the mood" movie. Set right before World War I, this steamy film starring Kiera Knightley is apparently based on the true story of Carl Jung, Sigmund Freud, and a patient who got in between them. Fans of Knightley can rent the film on Amazon.

As the title would suggest, this film is about a woman (Diane Lane) being unfaithful in her marriage. Richard Gere plays her jealous husband, and while it might not have the happiest ending, the sex scenes are worth the turmoil for any thirsty viewer who chooses to rent it on Amazon.

If you haven't see Basic Instinct, there's a chance you haven't seen one of the most popular sex scenes in film. The movie features Sharon Stone, who plays a bisexual author accused of murdering men. Since these murders are all plots appearing to be taken from her novels, it's pretty thrilling.

What makes the neo-noir film even more thrilling is the famous "open leg scene." If you don't know what I'm talking about, watch the movie on Amazon and see what shook 1994 to its core.

French writer Anne (Juliette Binoche) investigates the lives of two student sex workers for an article, but quickly gets wrapped up in their lives. By following their work, she's forced to confront her own desires in one fiercely sexy film you can rent on Amazon.

If you feel like being a fly on a wall throughout the course of an affair, 28 Hotel Rooms is the perfect voyeuristic feature. The racy film, found on Hulu, follows Chris Messina and Marin Ireland's characters as they meet in (you guessed it) 28 hotel rooms throughout their secret romance.

One thing Fifty Shades lacked was same-sex eroticism, which is where Below Her Mouth comes in. When an engaged fashion editor meets a newly-single roofer on a night out, the two start an affair that not only makes them both re-evaluate their lives, but also might cause your TV to go up in flames due to how hot the sex scenes are. Rent it on Amazon and thank me later.

You know what brings two lifelong best friends even closer? Having affairs with each other's teenage sons. Naomi Watts and Robin Wright star as middle-aged women who get real close with each other's kids in this taboo tale about the secrets friends keep. Watch the shocking story for free with a Prime membership.

If you liked the twisted backstory of Fifty Shades, this horror-comedy will be a great date-night movie choice. The star-studded film (featuring Samara Weaving, Bella Thorne, Robbie Amell, Emily Alyn Lind, and Hana Mae Lee, just to name a few) follows a kid who spies on his hot babysitter after she thinks he fell asleep, only to find out what she does at night is... very bad. Stream it on Netflix for a truly unexpected watch then be sure to check out the sequel as well.

This article was originally published on July 26, 2020

More like this
6 Facts About Mckenna Grace From 'The Handmaid's Tale' & 'Hill House'
By Ani Bundel
An 'After' Prequel About Hardin & A Sequel About His Kids Are In The Works
By Abby Monteil
'The Kissing Booth 3': Release Date, Trailer, Cast, Plot, & More Details
By Sarah Halle Corey and Lexi Williams
Stay up to date