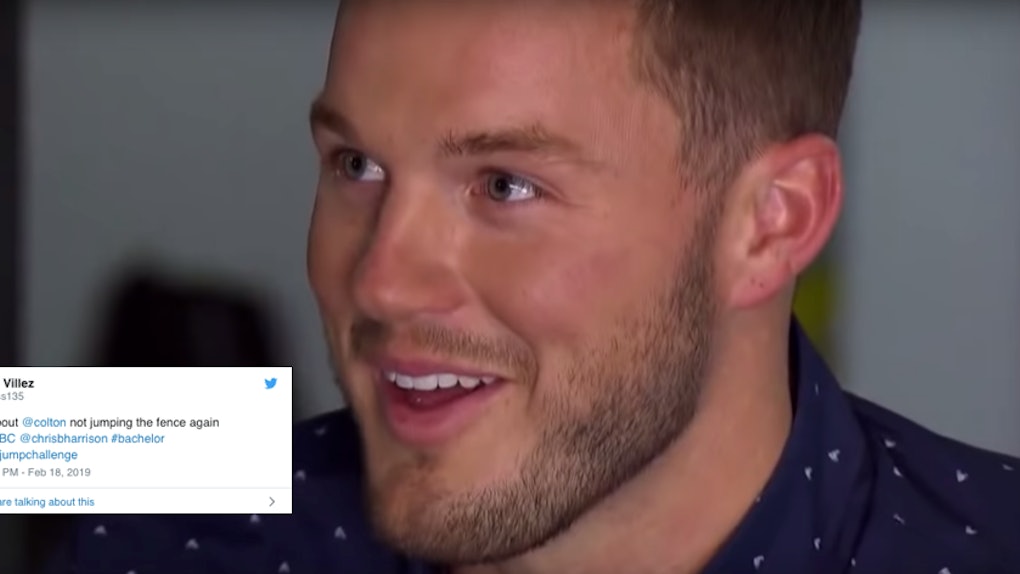 Bachelor Nation has seen a lot of Colton Underwood's journey so far, but there's one bit of drama that The Bachelor has been promising fans for weeks and weeks now and hasn't yet delivered. It's a moment that's been hinted at in almost every promo and yet still hasn't been shown on air, leaving many fans on the fence (pun intended) about whether or not they can even trust The Bachelor producers at all. That's right, I'm talking about Colton's infamous fence-jumping breakdown. The fence-jumping is a super dramatic moment that's been promised to fans since the beginning of the season, so lots of fans have voiced their impatience with tweets about Colton jumping the fence.

Fans have already seen lot of big Bachelor moments that were teased at the start of this journey, from Heather getting her first kiss to the tension over which of the ladies wants to be the next Bachelorette. But, the fence jump has been teased week after week, with promos hinting that it would be a part of each week's episode, and yet it still hasn't happened. Colton's season has been such an emotional roller coaster that it wouldn't be out of the question for him to jump over a fence in outrage during any one of these weeks. When Elyse left? Totally could have jumped the fence then. When Onyeka and Nicole wouldn't stop fighting? That was a fence-jumper. Or, how about when Kirpa and Cassie started a shouting match in Denver? That could have been such a good moment for Colton to hop a fence.

The fact that Colton still hasn't jumped the fence just means that there's even more drama ahead. Colton's already had so many ups and downs, I hope his tender heart can handle more anguish. But, until that day comes, Bachelor Nation will just have to make due with tweeting their frustration over waiting for a fence-jumping promise that has yet to be fulfilled.

After being led astray so many times by The Bachelor producers, some fans are even beginning to question whether the shot of Colton jumping is real or not. They're wondering if he's even capable of such a physical feat, let alone if we'll see it this season at all.

Of course, there is footage of Colton jumping a fence in what seems like a moment of intense emotional distress. But, as the end of the season draws closer, there are fewer episodes left that might possibly include the scene. Some fans are struggling to see when the scene will fit into the remaining episodes of this season.

Meanwhile, other fans seem pretty close to giving up on The Bachelor altogether after they've gotten their hopes up with misleading promos so many times.

In the end, the tried and true members of Bachelor Nation could never really give up on the Bachelor franchise. Everyone's made it this far with Colton and it's only right to see him to the end of his journey. Besides, The Bachelor has promised that the fence jump is coming soon: