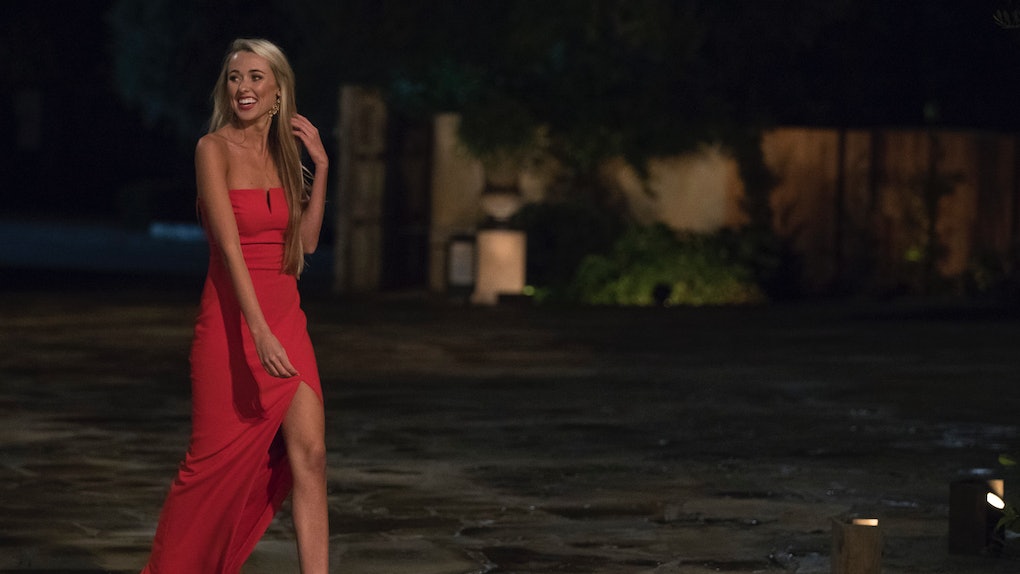 Heather & Colton's Date On 'The Bachelor' Was Super Awkward, But Had Sweet Moments

ABC knew it was in for a year full of puns and sexual innuendos when the ink dried on virgin Bachelor Colton Underwood's contract, but it probably didn't bargain for a contestant with as much inexperience as the franchise lead. 23-year-old Heather caught Bachelor Nation's attention when she admitted she had never been kissed. Although she told Colton this on a group date, she would have to wait until a one-on-one date in this week's episode for the former NFL player to officially make a move. Heather and Colton's date on The Bachelor was a little awkward, but more importantly, Heather finally scored that first kiss. She's Drew Barrymore no longer!

While we can only hope that she's really a successful young woman with a thriving career, 23-year-old Heather initially landed herself with the job title of "never been kissed" on Season 23. The California native claimed to be an adrenaline junkie who has yet to cross kissing off her bucket list in her ABC cast bio, which read:

Born and raised in San Diego, California, Heather is a Southern California girl through and through. She's a thrill-seeker who enjoys bungee jumping, skydiving and river-rafting. But out of all the thrilling things Heather's done, there's still one thrill she's yet to experience—she's never kissed a boy!

During private time with Colton on a previous group date, Heather opened up about being a virgin who has never kissed a boy. Imagine those rom-com moments where two people mutually attracted to each other check out the other's lips before being interrupted by a best friend, dog, or disposable fiancé. That partially resembled the awkward silence between Heather and Colton after her confession, as it was clear that the latter wasn't going to subject Heather's first kiss to the smooch-fest that a group date can be.

So when Heather landed a one-on-one date during Feb. 4's episode in Thailand, it was clear that Josie Geller 2.0 had a strong chance of receiving a kiss from Colton. "I'm feeling so much excitement, so many nerves, so many butterflies," she said ahead of her date. Glad to know you combated those nerves by brushing your teeth, girl!

Twitter was here for Heather's nervous eagerness about what her day with Colton could have in store.

Of course, following Heather's explanation of previously avoiding her first kiss because she knew the person wasn't for her, some of the wittier Bachelor Nation members also had thoughts to contribute.

As Heather and Colton wandered the streets of Thailand and ended up on the waterfront, Heather told the camera that she was getting good vibes from the Bachelor but wasn't the type to tell a boy he could kiss her. Any reserve she had in the scenario was compensated through gratuitous shots of Colton's mouth. Welp, thanks for a gift I didn't ask for, ABC.

By the time the night portion of their date began, Heather was ready to open up about her romantic history. After college, she met an intriguing guy but didn't feel any special chemistry with him. She lasted eight months with him without kissing, concerning Colton about how she may have built this potential moment up in her head. Heather insisted this wasn't the case, leading to her getting the date rose and finally getting that magical first kiss under a firework display.

The moment might've seemed straight out of a Disney movie, but the pair's lip lock couldn't distract fans from their awkward attempts at conversation throughout the date.

Colton's earlier interpretation of Heather never being kissed meaning she knew her worth is a little problematic, but he does deserve some applause for waiting until a private moment to do the deed. If a woman is brave enough to tell the truth about her relationship history on TV, she at least deserves the knowledge that she's the only one a guy has kissed in the span of 24 hours. Congrats in getting what you came for, Heather!