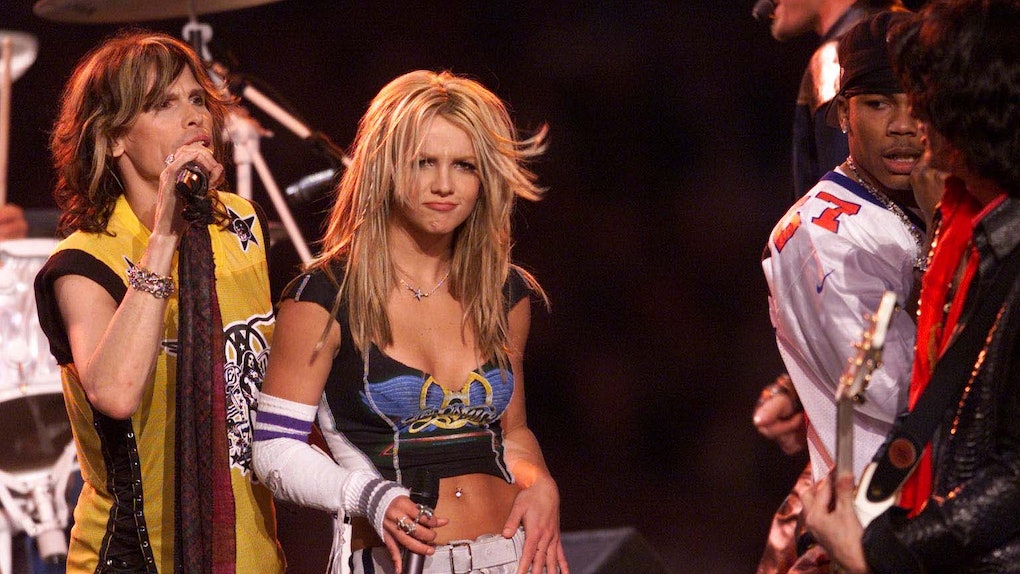 As an angsty 8-year-old, the song of my second grade year was Green Day's "Boulevard of Broken Dreams." I was so punk rock in my favorite Gap Kids ensemble, belting out "I walk alone, I walk alone" in my mom's mini-van, because apparently fractions just really take it out of a kid. When the song reached one of its more mature lines, "read between the lines, what's f*cked up and everything's all right," I was oblivious. I always sang, "what's forked up." Yes, as in the utensil. Considering I couldn't even get the words down, I gave zero thought to the meaning. And thankfully so, I'd only learn the real connotation behind my favorite hits and their NSFW '90s song lyrics years later.

TBH, it seems like everyone was hot and bothered from '90 to '99, because the Billboard 100 was filled with sexy tracks. I danced around my house, earbuds in, iPod mini on repeat to classics like "Genie in a Bottle" and "No Diggity" without a clue as to what the songs were really about. And while, some decade classics are more subtle than others ("I Want To Sex You Up" doesn't exactly scream pure), plenty of your '90s favorites are probably raunchier than you once thought.

1. "Genie in a Bottle" by Christina Aguilera

Christina Aguilera shed her squeaky clean Disney persona with the release of her 1999 single, "Genie in a Bottle." And despite my previous understanding (or lack thereof), the hit was definitely not a nod to Aladdin. With lines like "Hormones racing at the speed of light" and "you gotta rub me the right way," it's pretty clear, Xtina was looking to get laid. Get it, girl.

Fresh off her first divorce from music executive Tommy Motola, Carey dropped "Honey." And it's a seemingly sweet love song, right up until you really give it a listen or watch her music video. The pop princess sings, "you're the only thing I wanna do" and "honey I can't describe, how good it feels inside." She also dances around with a bunch of sailors, also known as seamen. So, take that as you will.

The Spice Girls made waves in the '90s for their message of female empowerment, but they also promoted more than girl power. In "2 become 1," Posh, Sporty, Scary, Baby, and Ginger sing about safe sex, which is everything. "Be a little wiser baby, put it on, put it on, 'Cause tonight is the night when two become one." Important reminder!

"Red Light Special" is not only an acknowledgment of the Red Light District (the home of prostitution and sex shops), but is like an instruction guide for getting it on. "Just come through my door, take off my clothes, and turn on the red light," they sing. "I'll give you the red light special, all through the night."

6. "Any Time, Any Place" by Janet Jackson

As an adult, it's pretty clear from the jump that Janet wants it any time, any place. Hence the name. And by it, I obviously mean some lovin'. "Strangers all around, with the lights down low, I was thinkin' maybe we could, well...you know," she croons. And yes, we do know.

Usher, known for his sultry moves and sexier songs, wants to "make love until the sun comes up," per his 1999 single off My Way. And yes, you guessed it, he wants to take it nice and slow. With lyrics like, "I got plans to put my hands in places, I never seen, girl, you know what I mean" and "now, baby tell me what you want to do with me," it's really not that complex. He's singing about sex (again).

It's important to note the very serious allegations against R. Kelly, including alleged domestic violence and sexual abuse. Especially because it makes his sexed up song, "Bump 'N Grind" feel all kinds of skeevy. He may sing, "I don't see nothing wrong with a little bump and grind," but I see a lot wrong with his reported underage activity and predatory ways. Boy, bye.

Be careful Shaggy, you're really setting expectations high. In his "Boombastic" smash, the '90s icon brags about his skills, calling himself a lyrical lover, well built with a sexual physique, and smooth like silk. Hope he can deliver.

The very first line in the song is, "I wonder if she could tell I'm hard right now." No subtly here, the R&B trio is getting real about dancing "Too Close" and boners in the club. "Baby, when we're grindin', I get so excited" they continue. "It's almost like we're sexin'."

Blackstreet's "No Diggity" is a forever classic, and I promise to never stop singing (i.e. shouting at the top of my lungs) along to the lyrics, "I like the way you work it, no diggity, I got to bag it up." I used to 100 percent think it was "back it up," instead of "bag it up," which means put on a condom. But you know, bravo for promoting safe sex. Here for it.