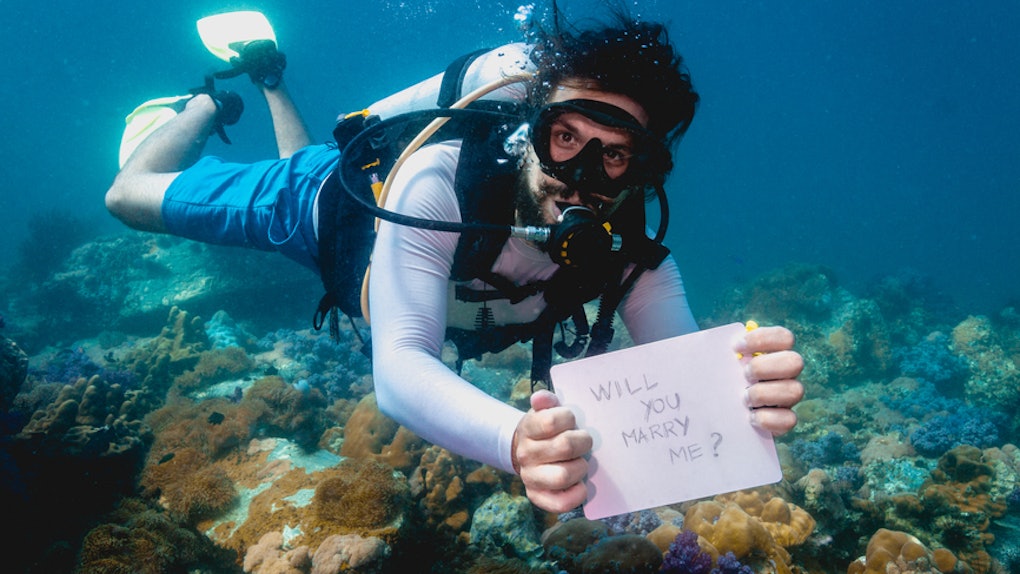 I am not the most traditionally romantic person. In fact, I'm probably as far from it as you can get. Candles, poems, loves songs, and rom-coms all turn me a particularly sickly shade of green. The cheese of it all is just too much. But even I, dead inside as I may be, have occasional stray thoughts about what my preferred marriage proposal would be like. In my mind, it would be something simple, maybe surrounded by friends, with minimal opportunity for things to go awry— because, oh boy, there are some wedding proposals that went terribly wrong out there. Seriously wrong. Don’t believe me? Google it.

While I don't personally want to be a part of a proposal fail, I can't get enough of watching them happen to other people. Does that make me a monster? So be it — it's just too funny. I will happily go down a YouTube rabbit hole of proposal fails, looking for new and unique ways they've spun out of control. If, like me, you've spent some time watching them and think you've seen it all, well, you’re wrong. It turns out there are even more ways for a proposal to go badly, as I learned on Reddit. A Redditor asked folks there, "Have you witnessed a terrible marriage proposal?" And the answer was an emphatic yes. Brace yourself, because the the cringe level of these stories is off the charts.

Say “I Don’t” To Marriage Proposals That Involve Food

my best friend just got engaged and when her SO proposed they were in a little french deli. She had just put a massive mouthful of pie in her face when she saw he had got down on one knee. She was so shocked she spat the pie out all over herself, all over him, all over everything. She just sort of nodded ... it was very like her to do something like that so it's all fine but still ... I don't think he was expecting pie in his face.

I was at Taco Bell with a few friends of mine, including a guy and a girl that had been dating for a few weeks. A few of us got tacos, but the girl only got a diet coke. So her boyfriend asks her, "Do you want hot sauce?"She says, "uh... No. I just got a Diet Coke, what the hell would I want hot sauce for?" He says, "I dunno. But I just think it would be really good if you had some hot sauce." They argue about whether or not she needs hot sauce for awhile, until finally she just says "ok, whatever." He goes over and gets some. Comes back with a packet, gets on one knee, hands her the package that says "Will You Marry Me?" on it, and pulls out a cheap looking engagement ring out of his pocket. Keep in mind they've been dating about 3 weeks at this point, and we're in the middle of Taco Bell. She gets this look of absolute shock on her face. And then says yes. They got married a few months later. They got divorced a few months later. And that was the most humiliating trip to Taco Bell of my life.

I knew a guy who was at McDonalds with his girlfriend one time, and as a joke he wrapped a fry around her finger and said, "Will you McMarry me?" She started crying and called her mom and like started planning the wedding the next day. He hadn't meant to propose but he didn't have the heart to tell her so, so he just married her.

I saw a guy propose to his girlfriend in a Subway at around 9 at night. It was so unbelievably awkward because it was just the three of us in the shop. She said no, the guy cried and I still had to order my sub while they sat there.

The Bait And Switch Is A Guaranteed Proposal Fail

Saw a couple in a jewelry store when my wife and I were looking. Guy asks to see a ring, kneels, "will you marry me?". She flips....ohmygod!ohmygod!ohmygod!ohmygod! yes yes yes!! He says "great!" then hands the ring back to the employee and tries to leave the store. He proposed with a borrowed ring. Tries to explain to the girl he couldn't afford the ring but wanted to propose correctly. She slaps him so hard my face hurt (she put her whole body into the slap) and starts screaming about how her mother was right, etc. etc. No clue if they ever got together, but it was hard to watch.

My dad stuck the ring in a stick of deodorant, then told my mom she needed to use it. Small argument ensues when mom tells dad she does not need it :/

That Time When More Than The Ring Was Golden

I proposed to my wife in Dublin, which is more difficult than it sounds because it's not a romantic city. After dinner, I decided that the Halfpenny Bridge was about the best place to get the job done. Right in the middle of my proposal, I hear the unmistakable sound of a drunk guy pissing off the bridge not 10 feet behind me. Ireland has never let me down.

Come On Folks, It’s All About Timing

I was on the ferry to the Statue of Liberty a few months back, and suddenly we see a plane writing something in the sky... Extremely slowly. Like, ridiculously slow. I know it must take a while to write something out in the sky, but it seriously took like 25 minutes for this dude to write "MARRY ME SUE" in the sky. By the time he had written Sue's name, the "MARRY ME" had faded from the sky.

I work at Universal Studios in Orlando a few months ago and I watched a Fear Factor Live show. One of the stunts a lady is in a chair with a plexiglass box around her head. Her arms are strapped down as well. Someone spins a wheel and what ever it lands on goes on her head. Either snakes, scorpions, spiders or cockroaches. This girl is the contestant in the chair her manpanion spins the wheel. It lands on scorpions so they do the stunt. At the end her man gets the mic and says his spiel while the girl is still strapped in the chair. He didn't get a real answer til the poor girl was out of the chair. Just super awkward. Great way to start the marriage.

So, Yeah, This Is Awkward

I proposed on a dinner cruise and told her I was gonna throw her overboard if she said no. The couple next to us interrupted to ask if she needed help.

Pilot here. Guy ask me to fly him and his SO over a field, where 150 people had formed a heart and two rings. Huge show, I was really impressed. When she saw it, her response was: "Look at all those idiots! How ridiculous is that??" He did not ask his question that day.

And, Well, Then There’s This Marriage Proposal

This will never be seen, but it's too good not to mention. My friend's girlfriend knew he had purchased a ring, and could not have been more excited about it. So when he told her to dress up nice, because he was taking her out for a fancy dinner, she was over the moon. All through the meal, she sat giddily on the edge of her seat. They had appetizers, dinner, dessert, and then... got back in the car to go home. Finally, she said, "What's going on? Why aren't aren't you proposing?"

He apologized, and said he planned to, but the ring hadn't gotten re-sized yet. She was crushed. Fast-forward a couple of hours, and they were lying in bed at the end of the night. My friend turned to his lady and said, "You should touch my penis."

"No," she said. "I've had a really disappointing night, and I don't exactly feel sexy."

"You should touch my penis."

"You should touch my penis."

TL;DR: The ring was under his balls.

And to think, you believed romance was dead.

More like this
Is Katie Thurston Engaged After 'The Bachelorette'? Her Instagram Is Sus
By Joyann Jeffrey
Sophie Turner & Joe Jonas' Pics From Their Vegas Wedding Are Such A Vibe
By Cianna Garrison
Tristan Thompson's Mother's Day Instagram For Khloé Kardashian Was Straightforward
By Lydia Wang
Stay up to date