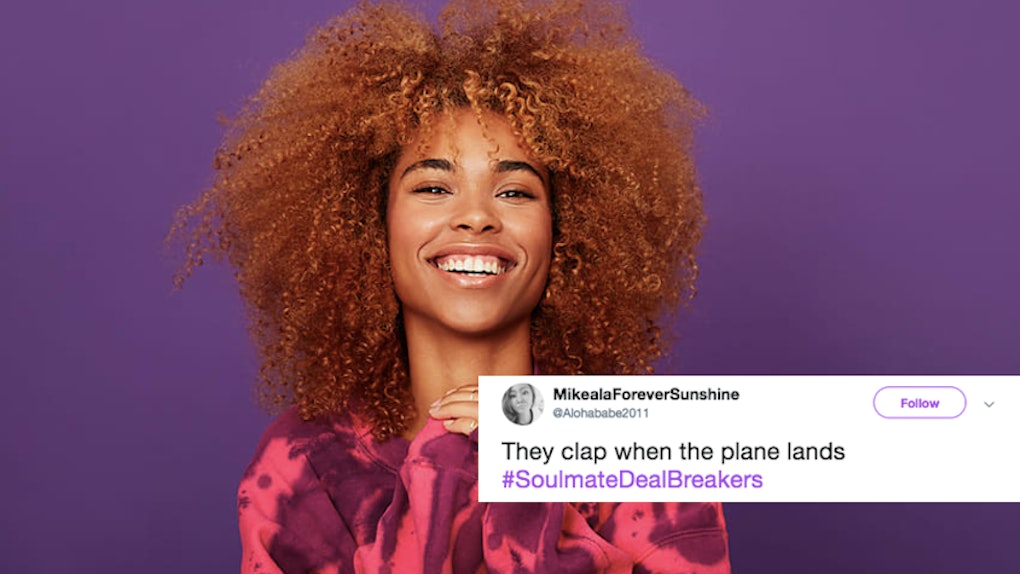 Sometimes in life, no matter how much you love something or someone, you discover a deal-breaker that effectively overshadows whatever love you thought you felt. Maybe it's a job you love that doesn't offer paid time off, maybe it's a new apartment that doesn't have a dishwasher, or maybe it's someone you love who you later discover hates coffee or loves Nickelback. At that point, what do you do? Is it make-or-break? Well, looking at these tweets about soulmate deal-breakers will definitely remind you that it's OK to not settle for something you just can't get behind. There is such thing as a deal-breaker, and whatever yours is, don't be afraid to own it. After all, you deserve nothing but exactly what or who you're looking for.

Last week, the hashtag #SoulmateDealbreakers circulated on Twitter — a perfect example of how even though the internet can be a trash place sometimes, it still has the potential to give us something amazing, like a viral video of a dog saying "hi," or Chrissy Teigen in general, for instance. #SoulmateDealbreakers brought out the best of the internet yet again, when people started sharing the deal-breakers that would absolutely not fly for them, no matter how meant-to-be a soulmate seems.

With answers ranging from silly to completely hysterical, people on Twitter have shared what they consider constitutes a soulmate deal-breaker, and it's all you need to make it through your Monday.

I'm from Texas, which means I appreciate a good steak. If my partner ever put ketchup on a New York strip, I'd run out the door.

2. Also, this is seriously important.

Listen, if you don't also indulge in the black lifeblood that is coffee, then how are we ever supposed to truly bond?

3. This is just common courtesy.

If anyone is rude to those in the service industry or someone who works in retail, don't be afraid to say, "thank u, next!"

I'll be honest, I kind of love it when the plane lands and there's that one person clapping. I think it's cute and sweet and reminds me that we're OK and the world isn't total crap. We've got to find joy in the little things, people!

I know, I know — Friends is problematic and clichéd, but I love it and it's comforting to watch. If my SO didn't also love the show, we would definitely have a problem.

Does this one even need any explanation? Politics can be as important or unimportant to you as you make them, but if you're deeply passionate about the issues, then dating someone who feels the opposite way might not always work out for the best.

How can anyone not find The Office funny?

Those green text bubbles are problematic.

No one has time for that anymore.

I mean, who else are you going to talk to about how Hermione Granger should've definitely ended up with Harry Potter instead of Ron Weasley? Don't @ me!

At the end of the day, a lot of these "deal-breakers" aren't that big of a deal to some people. But, you still have every right to care about what you care about, and to take a stand about what's important to you. Sure, these deal-breakers are funny, but there are plenty out there that aren't, like not being on the same page about the future, or having fundamentally different values. At the end of the day, do what you need to do to be happy. And if that means not putting up with the deal-breakers that you can't tolerate, so be it.