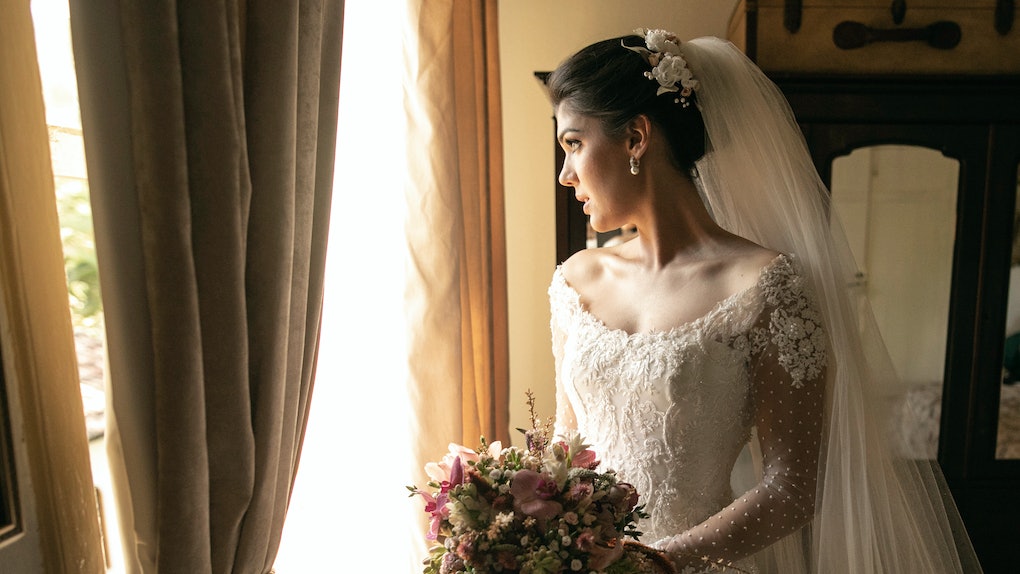 You're not going to know everything there is to know about your partner before you tie the knot. Sure, you may know how your SO lost their first tooth, where they like to order takeout, and what song they like to whistle in the shower. But even if you think you know everything, there's a good chance you'll make a few new discoveries after saying "I do" — and for some people, those discoveries are seriously shocking. I've got some wild stories about keeping secrets before getting married might just make you wonder what your boo is keeping from you.

Sometimes, it's OK to keep secrets. You don't necessarily need to tell your partner that you don't like their mother's casserole... or that you don't like their mother. But when you fail to disclose information that could impact both of your finances, health, or safety, you're likely doing both yourself and your future spouse a disservice. As clinical psychologist Joshua Klapow, Ph.D., previously told Elite Daily, "Keeping secrets is 'bad' or 'good' depending completely on the intention and what the secret is." Redditors took to an intimate AskReddit thread to share the jaw-dropping facts they learned about their partners post-marriage, and wow, are they juicy.

That she had credit card and student loan debt.

It was north of $50k. She was making $9 per hour at the time. Took me years to get that down and she never appreciated the effort.

That he smokes marijuana everyday.

Before we got married we smoked together only a few times.

That his mother was alive.

He gave me a sob story about losing his mother to a heart attack in a grocery store, and of course I was all about comforting him. We dated and eventually married, but what could he say — "I lied about my mother dying?" So he just kept her a secret. I later found a card from her, to him, for his birthday, in the garage, wedged in some books. I was horrified to find out I had a mother-in-law and hadn't invited her to our wedding.

We divorced after three years. [His mother] was a lovely woman and treated me very kindly, knowing I had no idea and believing I was horrified by the circumstances. She wasn't surprised at his duplicity and later regretted not warning me about her son, but she had hoped I'd be a 'fix' for him. I wasn't.

That she had herpes.

Wish I was kidding. Found out from her obstetrician when she was six months pregnant and we went in for an appointment and his first question to her was, 'How's the herpes, any flare ups?'

That she is near totally incontinent.

We dated for 5 years before we were married, and during the first year of our marriage, I found a stash of incontinence pants in her cupboard when I was hanging her clothes up. I asked her about it, expecting to hear that she has occasional accidents, as I knew her bladder was weak, but I never expected the extent of it. She burst into tears and confessed.

That he likes to wear women's clothing.

Not always in a sexual way either. I just came home one day and there he was sitting in my favorite pair of panties and my silk robe just playing video games.

Now we sit around together playing video games in our panties. It's actually really great.

That he slept with one of my bridesmaids (who was his friend) years before we met.

I wanted to bring it up to her and ask her how she thought he was in bed as a joke but decided it would probably make her too uncomfortable and lose the intended humor.

That my wife was a virgin when we first got together.

We had sex about a week after we started dating. I had no idea. We went it at like rabbits for two years before we finally got married. Eventually she told me. I had never asked about previous partners and never cared. I just wish I had known so I could have made it more romantic for her first time.

That he had a 'serious car accident' on his insurance record.

The only serious thing about it was that the insurance company had to settle for upwards of $500k because a judge wanted to make an example of him. [I] was pretty freaked out when I first found out, but luckily it was far enough in the past that my insurance company didn't fault him for it when I switched him over. But apparently his parents had been paying out their a**es to keep him on their insurance before the switch.

That he was a binge drinker and high-functioning alcoholic.

He would hide the empty beer cans in the basement. When I found all the can stashes, one month after our wedding, they filled two large garbage bags — like he drank a case of beer a night!

That my husband was adopted.

I was finalizing our passports for the honeymoon in six months (based on weather that time of year and legal name change) and needed birth certificates. He always said he was born in City X, State YZ, but when I got it from his parents, it was only a certified copy with a different city, way far away from the urban city he always told me. I work in healthcare, so I know what 'original forms vs. certified copies' look like. Certified copies come usually come from identity theft, loss in a house fire, or adoption/foster care system. So, just curious, I asked him and his parents, 'What happened to the original?' And they were like, 'What do you mean? That's his real birth certificate,' being sketchy as hell.

So... I just asked, "Were you adopted?" [I] called him out on it and asked why it was such a huge secret. I even called out his parents for not mentioning either. They said it was his issue to tell me and they weren't going to tell me since it was none of my business. Husband made me SWEAR not to tell anyone else, even my own family.

Bottom line: Not all secrets are harmful, and no one is required to tell their partner everything about their present and past. But if you have a feeling the information you're keeping is driving a wedge between you and your partner, then you probably want to spill before you take that walk down the aisle.

More like this
When Are Ariana Grande & Dalton Gomez Getting Married? Here's The Reported Tea
By Corinne Sullivan
Zac Clark & Tayshia Adams Are Wedding Planning & I’m So Pumped
By Lydia Wang
18 Celebrity Couples Who Got Married In Secret
By Corinne Sullivan
Stay up to date