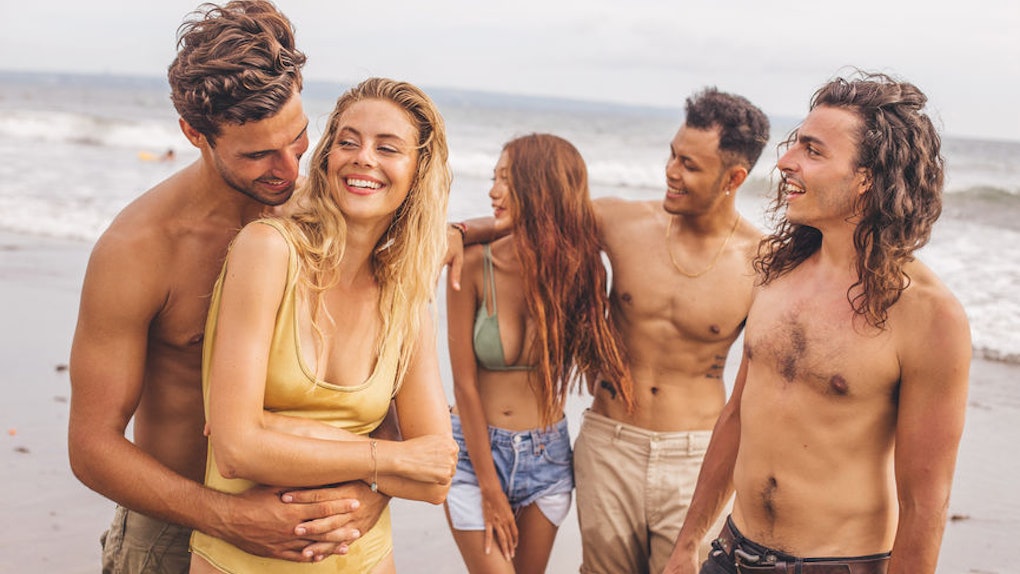 Having a steady hookup buddy can be fantastic, especially when you don't want something serious, because, you know, a girl has needs! But despite seeming like a pretty sweet setup for everyone involved, it can sometimes be surprisingly hard to find a solid partner for this kind of chill arrangement, which is how you may accidentally (on purpose) find yourself snuggling up to someone a little closer to home. Closer, as in, someone in your friend group. Sounds ideal, right? I mean, you already like them, but hooking up when you’re in the same friend group can be tricky. The lines can get blurry quickly, and god forbid, what's going to happen to the group if it all crashes and burns? But still, sometimes it just happens, and when it does, there are several familiar phases that we all go through.

Friendship is complicated, and so is intimacy. Add those together and throw in a handful of other people as collateral damage (and who you just know are going to have some strong feelings on the subject) and it can get really, really complicated. Now to be clear, I'm not saying you shouldn't hook up with a friend — you never know what potentially amazing things could come of it — just make sure you know what you're in for. If you don't, well, it'll go a little something like this.

1. You’re deep in the friend zone.

That's it, you are officially over dating. Everyone is terrible and you give up. That being said, you still have your needs, right? If only you could find a steady hookup who you actually like and respect! Maybe someone like your friend! They're cool, and kind of cute actually, but... nah! They're way too deep in the friend zone... right?

2. You find them attractive, but still. No.

OK fine, they're hot AF. But still not an option! This person is your friend, not to mention part of your inner circle, so hooking up would just be weird and awkward. But now that you think about it, seeing them naked wouldn't be the worst thing that ever happened.... A little flirting couldn't hurt...

You're out with your friend group, and a few drinks later, the person you've had your eye on only keeps getting hotter. Not to mention, they've definitely started flirting back. Not that this is going to go anywhere — that would be crazy! But would it, though? I mean, you're both adults, you can be mature about this, right? That's not just the booze talking, it's common sense. Yes. Common. Sense. But no, bad idea. Think of the friend group!

4. The flirting turns to kissing.

Oops, what friend group? Now you're kissing. Is it weird that you're actually pretty into this? I mean, it’s just kissing. It can just be one of those random crazy things you two did that one time you had too many Moscow Mules. But darn, it feels good.

5. You end up at their apartment.

How'd you end up here? Oh, right! The kissing, yes. The two of you know that you're rapidly reaching the point of no return. You both make pacts that this is not weird. You're both adults, and you can handle this. So, the hooking up commences and you know what? It’s actually kind of great. I mean, immediately after, you begin to tailspin, but the act itself was not terrible — like, at all. Again, you make a solemn pact that this will not be weird.

6. The First Time You All Hang Out Again “After”

It’s weird. It’s most definitely weird. Your friend group is back together, hanging out like normal, but now you and your hookup have a secret. A naked secret. The question is, do you want it to go back to exactly how it used to be, or are you both kind of thinking maybe you’d like to try it again? Probably a bad idea. So you decide it was a one-off...

7. What are you doing back at their place?

And yet, here you are again, back at their place tearing off their pants. Clearly this is not going to be a one-time thing. You don't know what it is but you’re both into it, and maybe the best policy is to just go with the flow and see what happens! What happens is, well... it keeps happening.

Now that it’s clear this is a “thing,” it’s time to set some ground rules. Namely, no one else in the friend group can know about your hookup — definitely for now, but probably also forever. Honestly, the secret is part of what makes it so hot. You go about your business, but of course your friends are starting to catch on.

9. Your friends find out.

Welp, the secret is out. And yes your friends have opinions, which only add to your confusion. Some of your friends are really excited about it, which worries you that they're getting ahead of themselves and excited about what could potentially be nothing. Other friends are skeptical and disapproving, making both you and your hookup partner feel bad and excluded. Now, you're doubting not just your hookup, but your friendships too. Not great.

So, now that you are officially hookup buddies and everyone knows it, the question becomes: Will it stay that way? Are either of you catching feelings or can you actually keep it casual? What if you actually want this to turn into something more? What if they do? What if they don't and they start seeing other people? Are you allowed to care? Red alert, full-on panic. What does this mean? Looks like you and your super causal, “we’re so adult,” hookup is turning into a situation where you're going to have to have “the talk.”

11. You find your groove — whatever that is.

You have the talk. It’s awkward AF. But, let's be honest, you're not the only people this little arrangement is going to affect. Your friends also have some skin in this game, and unless you want to completely blow up the squad, you're both going to have to keep it real about what you want from this. So, whether you decide your destiny is to call it quits, keep it casual, or try to make this a real relationship, it's time to find your groove — and limit the collateral damage as much as possible.