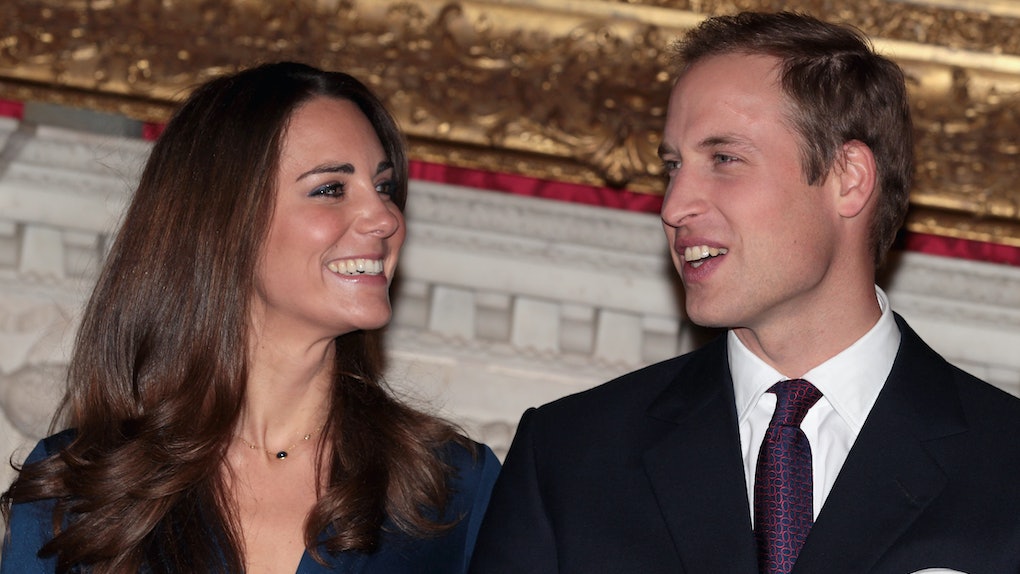 10 Throwback Photos Of Prince William & Kate Middleton That Will Make You Laugh, Then Cry

Now that they're a family of five, it's kind of hard to believe that Prince William and Kate Middleton were once just two college kids in love. Yes, before they were gracefully waving from palace balconies and chasing three adorable kiddos around, they were young and in love, and these five throwback photos of Prince William and Kate Middleton show exactly how far they've come. Ugh, they might make you cry — they're so cute.

Now, when you think of Will and Kate, you probably go straight to their extravagant royal wedding back in 2011, or any one of their three adorable children. But, really, the two had quite a life together before Prince George, Princess Charlotte, and Prince Louis came along.

Now, in case you don't know their love story, allow me to give you a quick refresher. Basically, the two met in college in 2001, at the University of St Andrews in Scotland. They didn't immediately get together, and they have definitely had their ups and downs. Additionally, they were pretty private about their relationship for a while, but in 2006, they made their first public appearance together. The rest is history.

Let's take a look back at how far Prince William and Middleton have come, because it's seriously adorable.

Their graduation photo was to die for.

Will and Kate met at college, and while they had a bit of a roller coaster relationship at the time, they still got together to snap an adorable photo after their graduation ceremony in 2005.

At first glance, it kind of looks like Prince William is rocking an earring, but don't get too excited, folks — it's just a trick of the light.

They went on such cute, fun dates.

Attending the Beaufort Polo Club, in Britain, in 2005, Prince William and Middleton seemingly had a fine time just being your average, young couple.

Don't worry, they had plenty of fun after college, too.

After graduating, Will and Kate were still two young, 20-somethings just trying to enjoy their time together. This shot is of them leaving the Boujis nightclub in London. Royals are just like us!

Clearly, they're a fun pair.

Their first real public appearance was equally as adorable.

In 2006, Prince William was "commissioned as an army officer in front of the queen at Sandhurst and joins the Household Cavalry as a second lieutenant," according to CBS News. Basically, Prince William followed his royal duty to join the army, and there was a big ceremony. Middleton attended the ceremony, and while there aren't any photos of them together at the event, it was still a big deal that Middleton was there.

Then, the two made their first actual public appearance together. In February 2007, they attended the RBS Six Nations Championship, and cheered from the stands.

Their ski trip was sweet as well.

In 2008, the couple heated things up by going on a ski trip together to Switzerland. Obviously, not every couple can go on a casual trip to the Swiss Alps. But, you know.... it's Prince William!

Attending the RAF Wings Graduation Ceremony in 2008, the two were absolutely perfect, even though it seems like Middleton was a little flustered at the time.

They loved to travel internationally, too.

The happy couple wasn't afraid to take their romance overseas. According to The Today Show, the young couple attended the wedding of friend "Chiara Hunt in Salzburg, Austria, on Sept. 6, 2008."

They just seem so relaxed together.

At the 2009 Audi Polo Challenge Polo match, Middleton and her boo walked together in the grass, looking relaxed and having a great time.

They went to ~classy~ events together.

Then, in 2010, Prince William and Middleton attended the wedding of Oliver Baker and Melissa Nicholson at St Salvator's Chapel, St Andrews in Scotland. At this point, Will and Kate were an established couple, and clearly, Will was extremely serious about her. An engagement was imminent!

Their engagement photos were obviously perfect.

In November 2010, the happy couple officially announced their engagement. According to ABC News, Middleton described the proposal as seriously sweet. "He's a true romantic and we had a wonderful holiday in Africa and it was out there in a very quiet lodge and it was very romantic and it was very personal time for both of us," she told ITV.

Clearly, Will and Kate have come a long way since their college days. But looking back, one thing is blatantly obvious: These two have always been meant to be.