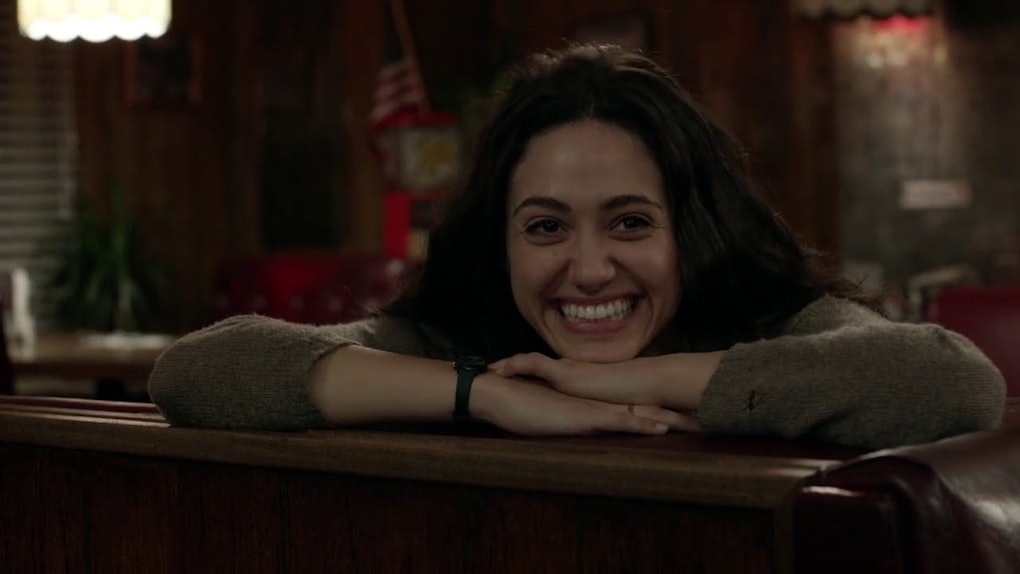 10 Fiona Moments On 'Shameless' That'll Make You Miss Her Already

Just over a week before Showtime dramedy Shameless returns for its ninth season, leading lady Emmy Rossum shockingly announced that she was leaving the series. Playing the oldest Gallagher sibling and maternal figure Fiona, Rossum praised her experience on the long-running series in a goodbye message, and while she may be seeking a professional change, it's going to take us more than just a season to cope with the exit of one of our favorite actors. Rossum reportedly isn't leaving the series until the Season 9 finale, so before then, we have to talk about these Fiona moments on Shameless that'll make you miss her already.

In the Aug. 30 Facebook post announcing her departure, Rossum said, "The opportunity to play Fiona has been a gift... I know you will continue on without me, for now. There is much more Gallagher story to be told." Thanks to the rest of the Gallagher crew growing up to be full-fledged characters with their own problems and triumphs, Shameless definitely won't suffer from a lack of stories to tell if the show returns for a tenth season. But the show's early years primarily focused on Fiona's struggles to care for her siblings as Frank's alcoholism and drug issues distracted him from providing for the family, and it's hard to imagine the series without her flawed, exhausting attempts to support the other Gallaghers.

Luckily, Shameless creator John Wells has confirmed that Fiona will leave her family behind in the ninth season finale, meaning we have a full season to prepare ourselves for this goodbye. In case you're still in denial about Rossum's news, revisiting some of Fiona's most memorable moments will definitely ease the blow for now.

1. Fiona Stands Up To Monica

Toward the end of Season 1, we finally witnessed the full dysfunction of the Gallagher family dynamic when the kids' mom Monica showed up, wanting then-toddler Liam to live with her and her girlfriend Roberta. Fiona snapped at the request, pointing out that she was more of a mother to the other kids than Monica ever was. Rossum's strong performance in the scene proved that despite some of her more selfish actions, Fiona had sacrificed so much to look after her siblings and was a character to sympathize with every now and then.

2. Fiona Lets Herself Pursue A Relationship With Steve

Fiona's tough exterior first began to crack in the pilot episode when she finally gave in to Steve's offers to go on a date with him. Feeling insignificant compared to her friend Jenna, Fiona was won over by Steve's detailed description of what she wore on the night they met, and the conversation inspired a heartfelt reunion on a train station platform. Like with any relationship on this show, their kiss didn't signify a happy ending, but it told us that Fiona was still capable of experiencing a win or two.

3. Fiona Learns That The Squirrel Fund Is Missing

Believing that Monica's well-being was improving in Season 2, Fiona left the squirrel fund out in the open, prompting Monica's shopping spree and a stream of havoc occurring among the other siblings. Lip accused Fiona of letting things out of her control, and after a brief meltdown, Fiona proceeded to do what she's always done: pick up the mess others made. The moment came in the middle of a personal high for Fiona, who was taking GED classes and seeking new opportunities at work.

In the character's last major moment before Rossum revealed she would leave the series, Fiona devised a clever plan of "going Gallagher" to get rid of her homeless tenants and their lawsuit. After running her own apartment building in Season 8, Fiona's real estate ambitions are expected to continue in Season 9, but she'll reportedly take a risky leap of faith to build upon her success.

In Season 6, the Gallaghers became homeless, but amidst the chaos that seems to perpetually surround them, Fiona was able to take a moment to reflect on what the house meant to her. What made her well up was the record of her siblings' heights on the wall, showing that despite all of the chaos and hardship the house contained, it still lent itself to the family's most sentimental memories.

By the time Monica died in Season 7, Fiona had toughened to the point of being indifferent about her relationship with her mother. When preparing the funeral, her goals were to get Monica "into the ground as soon as possible," and although it was one of the show's more comedic moments, the scene also tracked the progression of Fiona's emotional ties to Monica. The girl who broke down sobbing in front of her mom in Season 1 was no longer.

7. Fiona Fights Frank For Custody Of The Kids

After Frank's desperate plea in court to keep his kids, Fiona fought back by sharing a childhood memory of Frank leaving her and her brothers on the curb with a failed promise of coming back soon. When Ian began burning up with a fever, 6-year-old Fiona guided the group by foot to a medical clinic in the nick of time. The memory strengthened Fiona's argument that the other Gallagher siblings are best off in her care, and she committed to the promise of having them in her custody until the youngest child turns 18.

8. Fiona Is Off House Arrest

In one of the show's lighter moments, Fiona celebrated getting to cut off her ankle bracelet at the end of her house arrest. Ultimately, Fiona is flawed and not always likable, but from her joking about Veronica being an excellent mother to dancing around the kitchen sans bracelet, it was just satisfying to see the character at ease after her traumatic arrest and its consequences.

In Season 6, Fiona and Debbie learned that they were both pregnant. While Fiona planned for an abortion, teenaged Debbie wanted to keep her baby, causing strife between the two sisters. Fiona laid down the law with Debbie, saying that she wouldn't support her and inevitably raise yet another child. The sisters' relationship hasn't quite recovered since this rift, and the moment was another example of the tough love Fiona dishes out toward her siblings.

10. Fiona Cuts Robbie Out Of Her Life

Season 4 of Shameless took an extremely dark turn when Fiona was arrested after Liam accidentally ingested some of her cocaine. Before the accident and arrest occurred, Fiona had a small personal victory when she officially ended things with Robbie without a second look back. Although Robbie was the one to deliver the cocaine that Liam sampled, Fiona stayed persistent in keeping him away, which was something positive to keep in mind before the season became even more twisted.

While we probably can't expect a happy family reunion before Fiona parts ways with her father and siblings at the end of Season 9, we can definitely count on a lovably hardcore exit of the character. After all, Fiona Gallagher doesn't go down without a fight.

Season 9 of Shameless premieres on Sunday, Sept. 9 at 9 p.m. ET on Showtime.