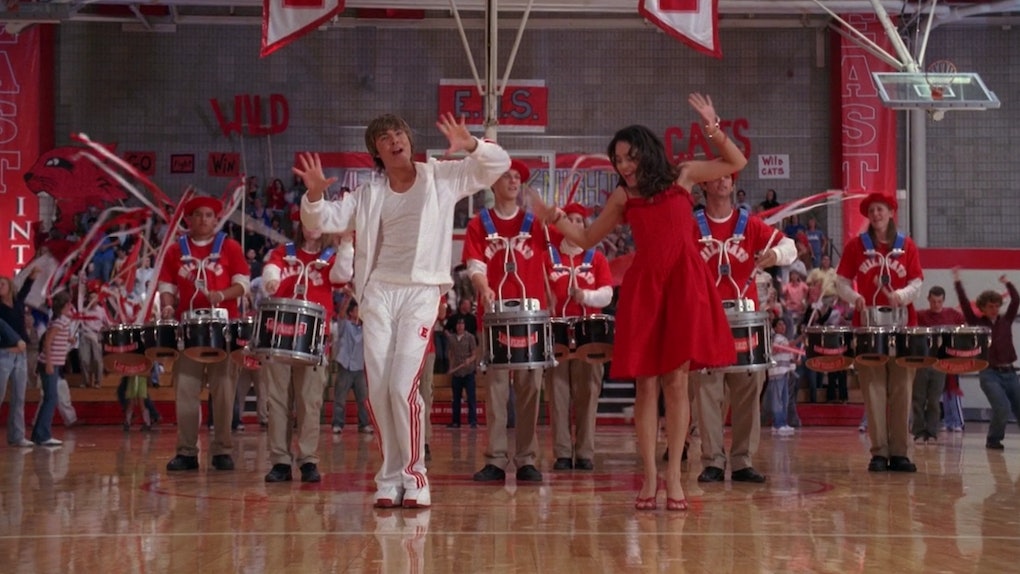 Raise your hand if you remember watching every single Disney Channel Original Movie growing up. Now, keep those hands raised if you also remember dancing along to movies like High School Musical and Camp Rock. Well, if you've been catching up on DCOMs from Disney+, you can also get back in the groove with Disney Channel movie dance tutorials on YouTube.

If you find yourself scrolling through TikTok in your free time, you may have recently seen a video from High School Musical star, Ashley Tisdale, dancing to "We're All in This Together." If you saw that, you probably saw Vanessa Hudgens' duet video singing (and drinking a glass of wine) in response. Seeing these two reunite may have hit you right in the nostalgia feels, which means all you want to do is have a movie marathon of the Disney Channel Originals ASAP.

High School Musical was the one that started it all with the musical movie trend on Disney Channel. From there, you got Camp Rock with the Jonas Brothers and Demi Lovato, to the most recent, ZOMBIES 2. Watching these movies may make you want to get up and dance, so if that's the case, here are 10 dance tutorials from different Disney Channel movies to get you going.

1. "We're All in This Together" From 'High School Musical'

Even if you've only seen High School Musical once, you're still very familiar with the infamous finale song, "We're All in This Together." You may even know most of the choreography just by watching it. Well, now you can get the official steps down as you watch the cast teach you it in this dance along.

Camp Rock has some amazing musical numbers, but in my opinion, it's Camp Rock 2: The Final Jam that has the best dance sequences. Watching Demi Lovato break it down in "Can't Back Down" is motivation enough to make you want to get up and move as well. Follow this dance tutorial for the song, and channel your inner Demi.

If you haven't seen ZOMBIES yet, you need to check it out on Disney+ ASAP. It's very similar to Romeo and Juliet-esque, except instead, it's cheerleader meets zombie. This movie has some killer dance sequences, and the song "BAMM" is no exception.

Before Ross Lynch was going to hell with Sabrina, Maia Mitchell was getting into some Good Trouble, and Jordan Fisher was getting letters from Lara Jean, they all starred in the movie, Teen Beach Movie. Follow this adorable video to dance along with them to the song "Surf's Up."

5. "Get'cha Head in the Game" From 'High School Musical'

Another High School Musical classic is "Get'cha Head in the Game." You don't need a basketball to nail down the choreography from this song as it's taught by Zac Efron.

The Disney Descendants franchise has an all-star cast that includes Dove Cameron and Sofia Carson. In the second movie, we're introduced to China Anne McClain's character with this song, "What's My Name."

In ZOMBIES 2, they introduce werewolves into the world and everyone comes together to sing this song, "Flesh & Bone." This dance is not only fun to learn, but great to do with your very own squad.

You can never forget High School Musical 2 with Zac Efron's angsty musical number, "Bet On It," and the dramatic duet between Troy and Gabriella, "Gotta Go My Own Way." That means you also can't forget the summer anthem, "What Time Is It?" You might not even need this dance tutorial to remember all the moves, but it'll sure be fun to reminisce to.

At the final jam in Camp Rock, everyone comes together to sing "We Rock" for the movie's grand finale. Rock out at home with the choreography from the film taught by Alyson Stoner.

Another great dance to learn from Disney's Descendants 2 is "Chillin' Like A Villain." Embrace your inner Disney villain as you move along to the steps taught by the movie's choreographer and Sofia Carson.