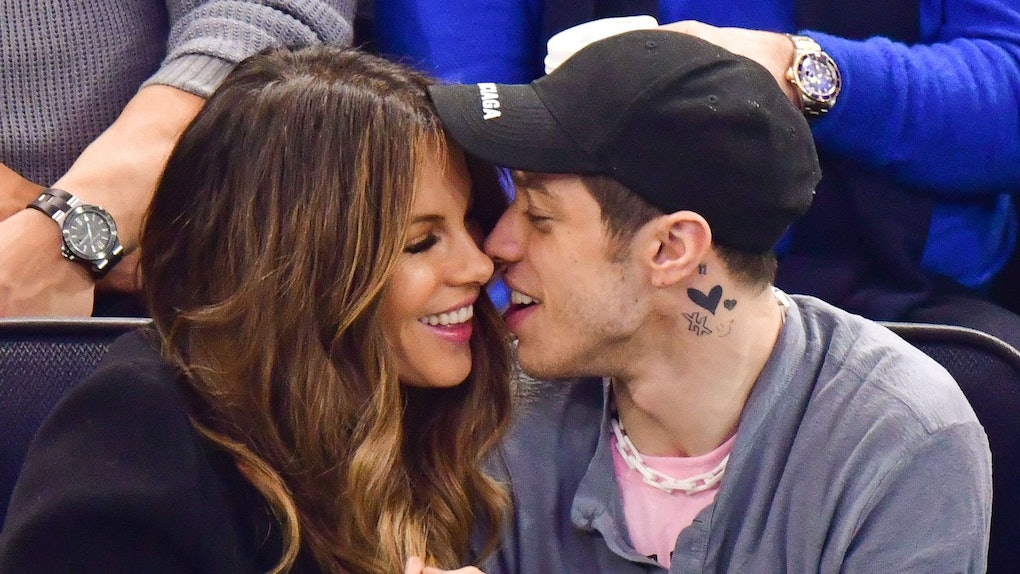 If you've ever filled out a dating profile — and in 2019, who hasn't? — then you probably already have a fairly good idea of your own personal dating age range. Do you max out at five years difference? 10? Or maybe you are open to folks from a different generation entirely. If so, then you share you open mindedness with some of the celeb couples with 10-year and over age gaps.

While Pete Davidson and Kate Beckinsale, with their 20 year age difference and full-on PDA, are currently getting all the headlines, they are really just the latest A-listers to show the world that age ain't nothing but a number (over 18 years old, obviously). The two reportedly met and hit it off instantly at the Golden Globes party. They were soon spotted holding hands leaving one of Davidson's comedy shows, sparking more rumors of their surprising but adorable romance. They seemingly confirmed the romance with a PDA-filled visit to a Rangers hockey game and then, over the weekend, their relationship, specifically their age gap, came up on an episode of SNL and Davidson shut down the haters in hilarious fashion by pointing out the hypocrisy of fixating on his relationship when, frankly, it's basically a Hollywood tradition to date folks quite a bit older or younger than you.

I mean is it really all that surprising that this happens — a lot? Afterall, when you put this many beautiful, ageless people together, it's basically bound to happen. So, in that spirit, let's celebrate some celebrity age gap love by taking a look at some star couples with age differences that really are just a great reminder that love truly is love.

Rumors of Adam Levine and Behati Prinsloo dating began in 2012 when the couple were spotted together on vacation in Hawaii. The couple had its ups and downs with a breakup in May 2013, but that was short lived as the couple reunited in two months later and immediately got engaged in July 2013. A year later, the couple was married and have since welcomed two children.

Ian Somerhalder and Nikki Reed moved quickly in their romance. These two started dating in 2014 and six months later they were engaged and married later that year! They welcomed their first daughter in July 2017.

Ariel Winter and Levi Meaden are making a modern family of their very own. The couple has been dating since 2016 and moved in together the following year.

We have been obsessed with this couple ever since they attended the Met Gala together as friends. Flash forward to December 2018 and the two were happily married — and we are living for it!

This literal golden couple first met while filming Green Lantern together in 2010. They started off as just friends, but by a year later they began dating and in 2012 they got hitched. Now they have two daughters together and the kind of relationship on social media that defines couples goals.

Michael Fassbender and Alicia Vikander are another couple that found love on a movie set. These two fell in love while shooting The Light Between Oceans. While that movie may break your heart (seriously, it’s so sad), they found their happy ending and the couple married in a secret ceremony in 2017.

Yep, Beyoncé and Jay Z are an age gap couple, too! They first started dating back in 2001 but didn’t actually get married until 2008. They have since had three beautiful children together — and ruled the planet. Just sayin’.

These two met where it seems everyone does in Hollywood: On a set. This time it was Hope & Faith that brought these two together. There has definitely been a bit of a rocky road; the couple got engaged in 2006 but split up three years later, only to get married in 2010, divorce in 2016, and, you guessed it get back together again. They share three sons and seem like this time they just might go the distance.

I have to admit, when these two got together I never thought it would last — but here we are. The couple were first seen cuddling on a yacht in Cannes in May 2017. While at first they denied the relationship, they were pretty much inseparable. They’ve had their ups and downs, but so far they are proving all the doubters — myself included — wrong.