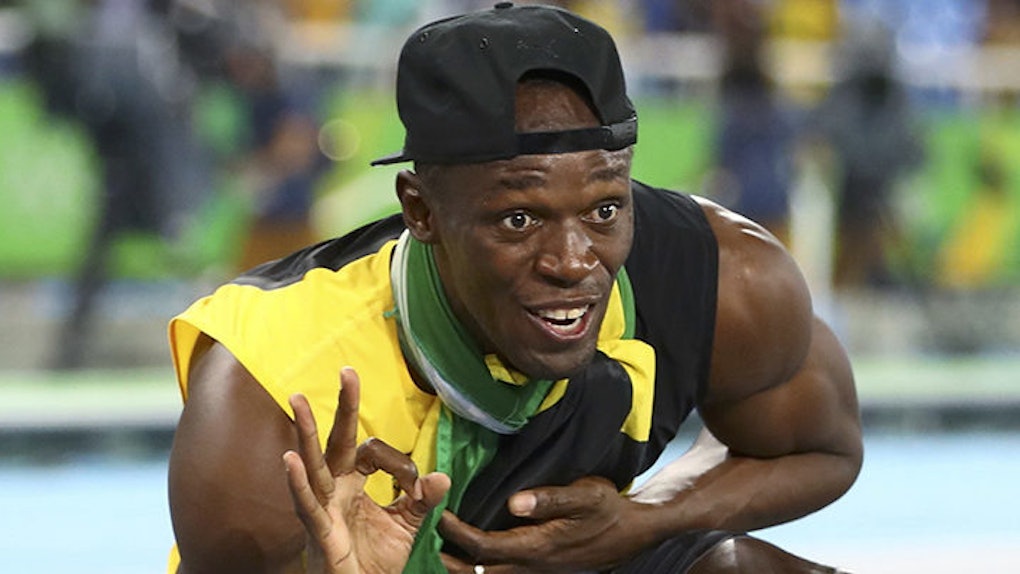 The party's over when Usain Bolt SAYS it's over -- and that appears to be never.

During his mammoth week of celebrations in London, the Olympic champion allegedly got women to line up as if they were on a podium and show off their boobs while he presented them with his medals, reports the Daily Mail.

Usain had been partying at Tape nightclub and was in a really cheeky mood. At first everyone was just goofing around but he started complimenting some of the ladies on their cleavage and encouraged two to flash him and a pal. Then he dished out his medals while music played from his iPhone. He was laughing a lot, pretending it was like Rio.

One girl is said to have asked who won the competition, to which Bolt replied,

It's all gold. There are no losers.

One night, Bolt managed to cram eight women into a taxi headed for his hotel after partying in London, according to the Daily Mail. It's worth noting, however, there are no photos to prove this.

But, he was pictured leaving his hotel with a woman in a black dress (at least, I think that's a dress).

And he took home two women.

Bolt tore up the Cirque le Soir club on Monday night, even grabbing the mic and rapping with his celebrity friends, including rapper Post Malone.

Waitress Yvett, 23, posted a couple of Instagram videos of the champion enjoying himself.

Back in Jamaica, Bolt's girlfriend Kasi Bennett has remained tight-lipped about the cheating saga.

You traded your life with a goddess for a one night fling with someone who will never even come close. I can't.

Citations: Usain Bolt got party girls to flash their breasts at him and then made them stand on a 'podium' while he awarded them medals (Daily Mail), 'He didn't want the party to end so he took us back to his hotel': Women who were pictured with Usain Bolt in London say he was determined to celebrate – as he's snapped out yet again on SECOND night in London (Daily Mail)